During the week, we panicked when we realised that Matthew was competing Brodie for the first time over agility equipment at Lansdown and he had never ran him on it before! Fortunately we managed to take the dogs to the arena where I work (which is great as its always set up and ready to go and the surface is fabulous!) and have a quick practice. I have got some good videos but I'm waiting for Matthew to show me how to put them on the computer!

Anyway, Brodie did a couple of runs at Lansdown and went clear in both although Matthew said he was a bit 'dreamy' which I think he does when he is stressed. It probably relates to the incident at Axstane but he did run better in his agility. Brax was a superstar and got 2nd in Grade 7 jumping! 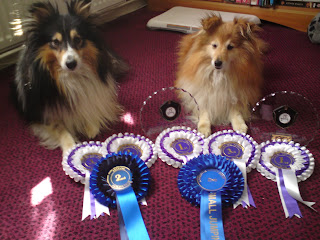 We had a great time at Watford show yesterday although the temperature must have hit 30 degrees easily. I have to say that without Brodies cool coat, I doubt he would have run as it makes such a difference. It was the first time I was running him as a Grade 6 and I loved being able to do more challenging courses. He was a wee superstar in both the agilitys (G4-7 and C6-7) and managed to get 3rd in both of them!! I need to learn to trust him more as the weave entry was tricky in the C6-7 and he would have done it better if I hadn't tried to help him so much! He did go clear in the jumping as well and was one out of the placings so just to get three clears made me so proud of him. I also discovered that running in bare feet really suits me!! I spent a lot of time as a kid running around outside without shoes on and it made me more confident of my footing - I know I'm weird!!

Brax and Matthew had a fantastic day at Watford. She got a 3rd in the jumping and won BOTH her agility runs!! All that contact work is starting to pay off :) She is most definitely solar powered though and goes so much faster in hotter weather. At least Brackens victories made up for Englands sorry defeat in the football.

Well done to Megan and Hattie with 4th and 6th in the agility and jumping, Jackie with George and Ellie who got 1st and 3rd in the agility, Tamar who won an agility and Diane and Riley who won the Grade 2 jumping. I missed Jane running Millie and Robbie but I saw the video and I just have to say his weaves are cracking now :) Sorry if I've missed anyone out but the heat is frying my brain!

At least my pony is good at keeping cool! 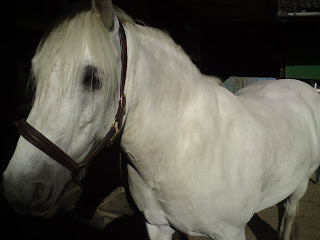