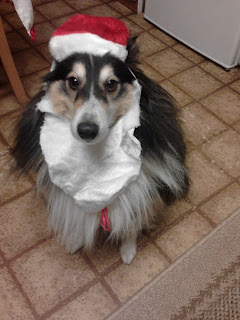 Merry Christmas everyone and hope you all have a fabulous 2013!!

We are having a quiet Christmas at home with Matthews family. It is nice as I'm on horse duty and it means I can walk to the yard and check the boys and still enjoy a Christmas tipple! I have been v poorly this weekend but am starting to feel more human today, I'm just glad I got all of my pressi buying and wrapping done last week :)
2013 looks to be a very exciting year for many reasons - in fact thinking about it all makes me so excited I can't help grinning! Firstly little foal Dakota (now Diva for certain reasons!) is coming beginning of Jan and I can't wait to start teaching her stuff. Brooke will be making her KC debut this year as will Dolly, Brax will hopefully be back in the ring, Brodie is going like a rocket and loving his agility and I have the bestest hubby a girl could wish for! Oh and the possibility of some more four legged smalls...
Posted by Rhoda at 18:18 2 comments:

Brooke went on another Toni Dawkins training day at the weekend. It was indoors on loose rubber chippings so another new venue and surface to work on. She hasn't worked with different dogs for a while so that was also a good experience for her.

Toni was working on tight turns and accelerating out of them, really interesting stuff! It is nice to hear other trainers ideas as I don't believe in a 'one method suits all' approach to dog training. All stuff to put in your mental tool box! Watching people do the exercises, it is apparent that Toni's handling style works very well for people whose dogs are a hell of a lot faster than they are!! I love learning from and watching lots of the top trainers but many of the people I admire the most in the agility world have long legs and run like proper sprinters unlike me :) Matthew never had that problem with Brax but think he might with Brooke!

Here are a few videos for the workshop

Acceleration out of a turn - I love the way Brooke strides the grid!

Sorry about the sun in this video although I couldn't complain as it was nice and warm! Brooke doing a short sequence including a 'grab turn' where you don't waste loads of time front crossing on your dogs line - it was definitely faster than a traditional front cross. (You can't tell from the video but the tunnel was a tricky angle from the 3rd jump) Grab turn meant you were ahead of your dog as it came over the last jump and already shaping the line to the tunnel more effectively.

Brooke is booked in to a Lucy Osbourne session in January for weaves and a Dave Munnings training day in Feb-what a lucky girly! :)

On Sunday we took the dogs to Lian and Colin's farm to spend a day with the Knights shelties. We got thoroughly spoilt and we treated to a lovely roast lamb dinner and long sheltie walk followed by another yummy meal and then sitting chatting in front of the fire with loads of tired shelties - perfect!

Lian took some amazing photos of our bunch, here are a few of them :)

Little diddle with her muddy face - her hair is growing back in nicely now. 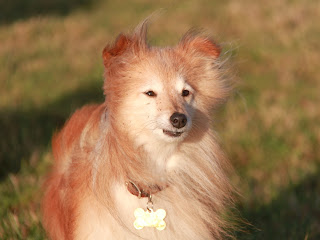 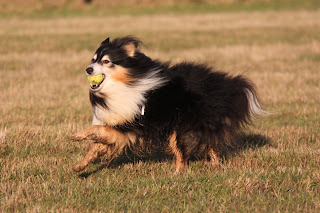 Whereas Brooke puppy is more of a cage ball fan! 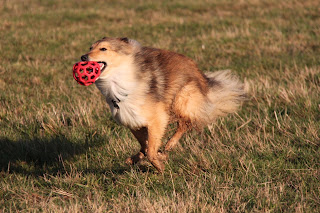 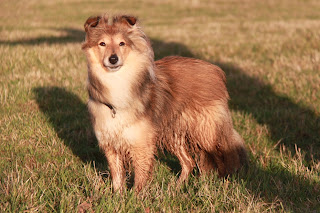 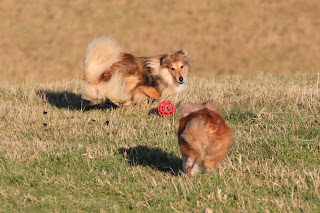 Almost all of the shelties - little Seny was too wriggly to sit still! The wind caught all of their ears in this picture - they look funny! The house in the background is Lian and Colins farm house on the Ridge. We had such a lovely sunny day :) 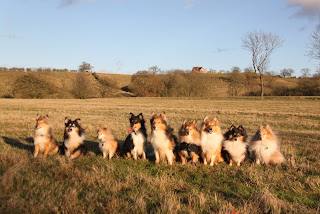 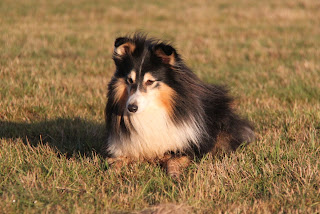 I have been really busy this week, it always seems mad running up to Christmas. I took a minute out to video Brodie doing some proprioception work indoors. He loves earning his breakfast doing fun things like this!

Brodie, Dolly and I went to Somerset over the weekend to compete at the UKA National Finals. Brodie had qualified in the CSJ Grand Prix and Dolly was in Beg Steeplechase. I was so pleased even to qualify them as only there are only 20 places in each nationally.

Brodie did his run on Saturday, he was flying! He was really raring to go and I just love running my boy, he is a little dude!! I knew we would struggle with the weave entry and I hurried him too much and made him run past. In hindsight I should have handled it with him on my right and sent him which would have been easier for him but I was worried that he would take the back of the long jump. Thats what I love about agility, its a huge game with your dog and the tactics of how to run things make it so much fun. You can always learn and  improve - I think dog walks and weave entries will be on the winter training list!! :) Brodies little brother Sizzle was a star and it was lovely that both of them went through to the evenings grand final.

Here is a video of our run in the Semi's (thanks Lian for the video). Promise not to laugh at my enormous T-shirt, I had four layers underneath it as it was freezing!!

Here is a cool action pic from the Semi 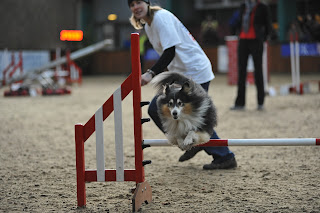 I loved the courses for both rounds - I really went for it in the Final and raced him too much on his dog walk to get to the 'wrong' end of the tunnel. I knew he would struggle with the weave entry so we collected more faults there but still managed to finish 6th! In the video you can see him pause on the seesaw - it was facing the glass of the cafeteria and he caught sight of the sheltie in the reflection!! Dippy boy - love him!!

Here is Brodie's run in the final

I have always wanted a photo of him jumping a wall so I had to buy this! 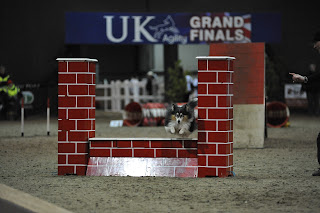 Sizzle and Lian finished 6th as well - these brothers are like peas in a pod!! 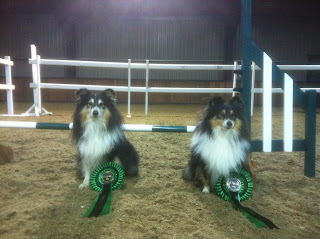 Dolly had her turn in the limelight on Sunday in the Beginners Steeplechase Semi. Bearing in mind that this was our 5th show together I had decided I'd be happy if she stayed with me in the ring!! The start was set up right in front of the speaker which had a loud electronic voice saying 'Ready'.  Luckily it didn't phase her and I even got a lovely wait which allowed me to get a head start! I was an idiot as I helped her too much into a couple of the tunnels which left me too far behind and she got a couple of refusals. I was over the moon though as she was fast, focused and really keen, I couldn't have asked for more! More sprint training I think for me and 'go on' training for her! She finished 11th out of 20 and the top 10 go through to the final - shame as the course for the final was more of a Dolly course. Never mind, she is still in Beg so we'll have another go at qualifying next year :)

Well done to everyone for their runs there were so many amazing dogs and handlers there! The organisation was very good and the atmosphere was electric. I'm never going to compete internationally but it gives you a good idea about what it must be like and what a great experience for the dogs as well :)
Posted by Rhoda at 12:00 2 comments:
Newer Posts Older Posts Home
Subscribe to: Posts (Atom)