Bru won his last agility needed to go Grade 7 at Inspire show!! 🎉💛 It was a bit of a hairy run but how exciting that he can now run in champ classes! Here is his run

Spark was brilliant considering that it was an indoor show (she isn't keen on the barking in confined spaces) She was judged in her two jumping runs by her Uncle Dan who trained her since she was an 8 week old puppy so she finds him super exciting!! It was lovely to have a course that tested all her skills at speed and really pushed us as handlers...all 190m of it! Here is her winning run 💜

Branston continues to grow like a weed and at almost 18 weeks is now taller than Bru! He is probably as heavy as him as well now 😂 At the moment we aren't doing any classes but are keeping up with lots of adventures out and about, tricks and recalls in new places. Also some learning how to watch quietly...something I wish I'd worked harder on with Spark! He has had an introduction to the manners minder, and also done a couple of hoops to both the manners minders and a dead toy. Here is his 16-17 week video
A week ago (Wednesday as there was a change of venue and weekends weren't available!) Bru did the UKA Grand Finals. He was in the performance challenge and was so unlucky in the jumping as the weaves were really tough, he missed the entry and then second time round came out of them early (they were into nothing!) His time was amazing despite the 10 faults! It is a two part competition and he went on to win the agility round with a very cool run but unfortunately it wasn't enough to place on the podium overall. Here is Bru's agility run!
Brodie is doing so well bless his heart! He has been the perfect puppy 'nanny' for Branston and enjoys similar length walks as he gets a bit stiff when the weather is damp. To be fair he is 15 in February so he is doing really well! 💙 Brooke is also a perfect great auntie and doesn't take any nonsense at all! We have pretty much decided to retire her from agility. She is running fine but is 11 next March and her shoulder is always going to have a weakness. Plus she is loving doing hoopers! 💚 We are doing a show this weekend so watch this space!! Happy retirement Mrs Bean! 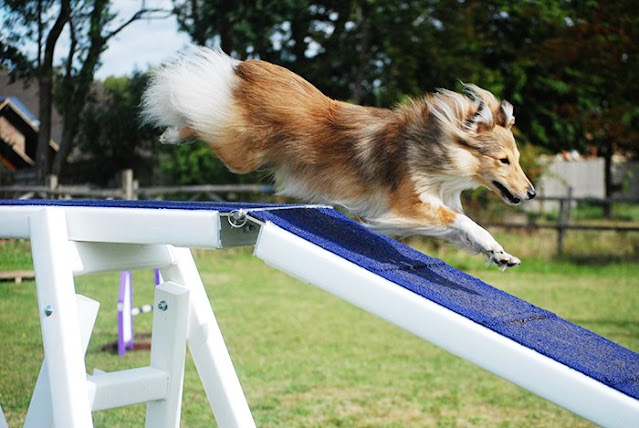