This post is mostly about Brooke puppy as she is so clever :) We went to Cippenham agility show on Sunday and it was a 'young dog' day out as we had decided to concentrate on Dolly and Brooke as there were a couple of C1-3 classes.

Jumping first and Brooke was a good girly, missed a jump as came in a bit to Matthew on a star but its the sort of thing that she would have done in training but needed him to be a wee bit closer in the ring. her weaves were lovely though! Dolly ran the same course and had to content with a broken handler, bless her! She had a refusal but the rest of it was nice - her weaves were tentative but she did them! Lots of dogs had gone off to see the judge so I was pleased that neither of ours did.

Agility next and Brooke was up first. Matthew really wanted her to get her seesaw after her flying fox impression at BATS so that was the goal. Well little star only went and ran clear! It was a nice course but the jump after the tunnel had caused some issues. Matt managed a good head start so he could be up the other end of the tunnel. Her contacts were good - still a bit creepy and Matt did hold her for a fair while on them (I love the fact in the video all you can see on the seesaw is her tail wagging!) Also first time seeing a wall and she didn't question it. Brooke finished 4th out of about 70ish dogs and only a second behind the winner :)

Brooke's last class was the C1-7 Helterskelter and she had a blast! It was tricky enough at the start that a lot of dogs got E'd but the rest of it was a flowing course. Brooke did such a good job and although she is still not going the speed she does at training, she is starting to run with more focus. The pole was really unlucky but it was nice that the scorer said it was a cracking run and she would have won by 2 seconds! Amazing baby doglet as there were 90 ish in the class and some very fast dogs. Here is the video, please excuse Sparkle squawking in the background!

Here are a couple of pics of Dolly (and Mr Toad looking unimpressed!) 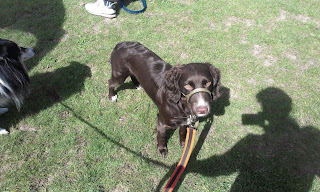 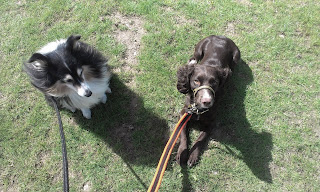 Ok so much to write but don't want to bore everyone to death! Had a really busy but very enjoyable weekend doing FAB Hants (looong journey!) and BATS show (10 min journey!) We had decided with Brax running so well to have a crack at the IFCS qualifiers as the smallest height is for dogs under 300mm and Brax is 280mm. Matthew had talked me into entering Brodie into the qualifiers as well as he is classed as a 'mini' height dog (between 12-16") I thought it would be great experience to try some harder courses with more pressure as I didn't do a champ class last year and have entered one coming up.

So the IFCS qualifiers are four runs per show and there is a series of shows. The four runs are agility, snooker, gamblers and jumping. If anybody is really interested they can look at all of our runs on YouTube but here is one run that I have to post as it was just lovely to watch Brax back on form :)

Brax was a superstar and won the jumping and snooker and came 3rd in the agility (5f on a contact!) It was a shame about the 5 faults as her agility run was faster than the winning run by 6 seconds! Brodie really enjoyed running and worked well as I never normally do 4 runs a day with him and I thought that the heat would get to him. His only slightly slow run was the snooker and having a bad back means I'm running slower which I think slows him up a lot as he likes to chase me. He did me proud and got a 3rd in the agility and 3rd in the snooker :) 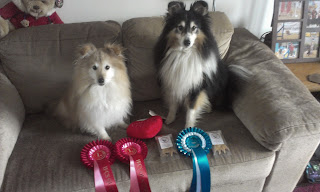 Brodie ran at BATS the next day and so did Brooke while Brax had a well deserved day off! Brodie did two runs - C6-7Ag and Med Olympia. I was really pleased with his C6-7 run as we did the hard stuff ok and it was my fault that he got a refusal (moved too soon - grrr silly me) and considering I'm crocked up we manged ok. He was tired in the Olympia but tried his best and did a steady clear that earned him 16th place! Not bad out of 150 odd dogs including some of the best in the country. Clever toadlet! This is his C6-7 agility kindly filmed by Paul and Maria. Their beagle Chester was really on form at BATS getting 12th in the Olympia and 6th in C6-7 jumping!! Go Chesterooo!!

Here are some pics that I couldn't put on last week.

Sparkle and her mate Jess (my ace puppy minder!) 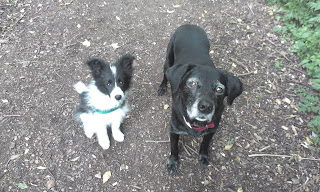 Sparkle playing with Matthew at HJ show-tugging with distractions is coming along nicely! 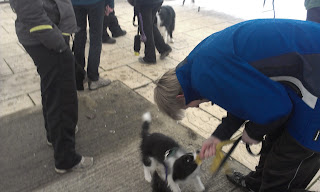 The sheltie girlies on the common after a game of ball 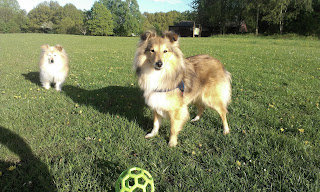 My gang - Brodie, Bailey and the Sparkler out for a stroll 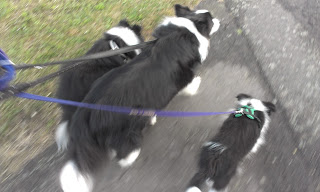 Brax and Sparkle having a cherry argument :) 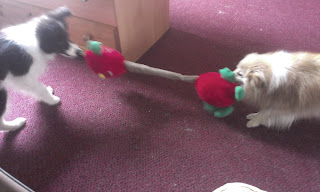 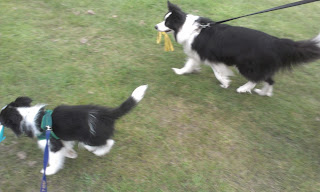 Tired girls all curled up - how pretty is Brooke puppy?! Not that we are biased! 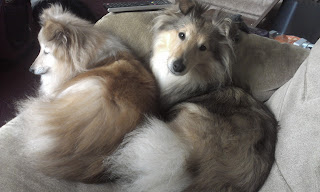 I had a lovely birthday weekend competing at HJ show in Witney. The weather was fairly kind to us and we were finished all of our runs by 2pm both days. My lovely friends spoilt me as well! Heidi made a choccy cake on the Saturday and also did very well with Jenson pupski getting a 2nd and 3rd. It was also Caroline's birthday on the Saturday so we had a mini party and cake kindly bough by Helen on the Sunday :) Caroline did very well with her doglets, qualifying Bobby for the CSJ and Ripley for Beg Steeplechase!!

Brodie did a really nice run in the CSJ, I managed to get him E'd on the 5th obstacle as I forgot to say 'left tunnel' so he went in the wrong end - stupid mummy! It was a 'good' E though as he worked round the course well and I managed to do some layering and other tricky bits well. Caroline has a video so will post in due course. There are some lovely photos of Mr Toad taken by Emma Elliot here. He also won champ jumping on a fast course by a good margin :)

Brax was slightly wild in her agility!! Haha she launched herself off from halfway down the dog walk down plank and her Aframe was terrible - she had fun though!! Her jumping run was awesome  and she got 2nd place - only 0.3 seconds off the winner, a lovely sheltie called Charlie.

Brooke did NFC agility runs both days and did a seesaw in the ring for the first time. She wasn't worried about the fact it was a aluminium seesaw and did her contacts perfectly :) Matthew ran her in the Beg jumping competitvely and although she was E'd she got her weaves from a tunnel nicely and worked well. Unfortunately in the Beg S/C qualifier she fell over a pole and landed on her head - poor puppy! She seems fine and ran the rest of the course really well. Brooke also had her permanent UKA measure and is 'toy' for life!

Brax ran agility NFC on the sunday and her contacts were much more sensible! Brodie was a star again and won champ jumping. The agility was a shame as he had a pole down (v unlike him) but ran well and was 8 seconds faster than the dog that won! Bless him :)

I am using the old laptop and its crap and won't let me access photos off my phone so will have to get them off next time :(

Merry month of May!

The sun is out and all of the animals are dumping their winter woollies big style!! Little Diva is still quite little, she is a beautiful girly and very laid back about most things. Other things (like having jabs) she is, well, a diva about!! Her winter coat is phenomenal and it is coming out in clumps. At least the local birds are happy collecting it for their nests!! 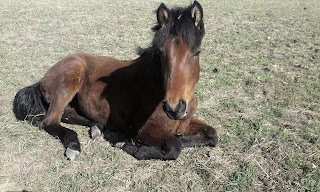 Mr Max on the other hand has a full clip every year so he isn't too hairy and is looking really well at the moment. He is going to be 16 on saturday and he will have his extra carrots in his dinner :) 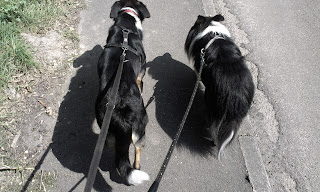 Little Sparkle continues to be a star puppy. She is different to the shelties in that she wants to dive bomb ANYBODY for cuddles which is great. Nothing really phases her and we are doing lots of baby fun things - lots of tricks and playing, calling away from other dogs (I don't like them playing like maniacs especially if they won't call away from other dogs) lots of short off lead walks and we are now doing 15 min on lead walks round the block solo - big girl!! 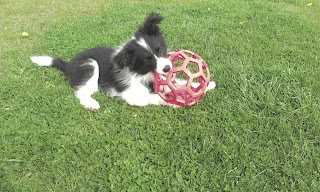 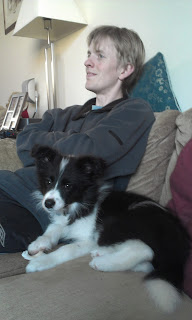 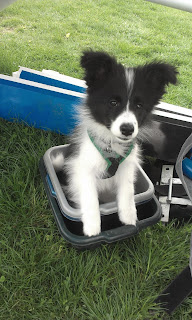 The shelties did some training over the weekend. Well Brooke and Brax did but poor Brodie had recovered from his injury in time to have a bad tummy! Poor Brodie, I think the heat and Brooke being in season got to him over the weekend. He seems better now but next time I might arrange for him to stay with a friend for a few days.

Brax believe it or not trained for three days in a row - not for any length of time but she loved it!! She is running so well. Helen and I had a lesson with Dan and I ran Brax - blooming heck she made me run!! We also set up a couple of tricky courses for fun over the weekend and this is Brax doing a bit of training

Dolly spaniel had a run round with me (I was suffering with a horrendous cold-typical for a bank holiday!) she was great fun and is now sticking 12 weaves into courses really well :)

Here is Brodie (post bad tummy but still not over Brooke!) running a Masters jumping course. I was really impressed with how all the dogs tackled it. I had some of my competing clients having a go and they did really well - v proud!!

Brooke puppy wasn't quite on form - poss as it was still the end of her season and it was very hot. She had a bash at the Masters jumping and got distracted by the Aframe bless her but not a bad attempt at all. You might want to turn the sound off for Brooke running!!