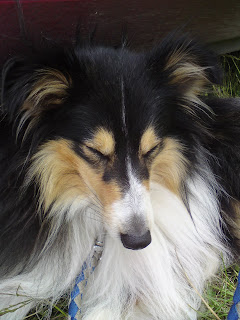 This is a very tired Mr Toad trying very hard to stay awake yesterday at Keston. Brodie and I went by ourselves and had a hot day out! When he was awake he worked very well getting 3rd in C1-4 jumping and 3rd in C1-3 Agility. The jumping course was not easy and had some tricky pull throughs so big thanks must go to Lisa Greenhow who really helped by working on pull throughs in training on Tuesday! (There were only 5 clear rounds out of 35 dogs!!)

Brax did Watford on saturday and got 6th in her jumping (C4-7) which was really good going as there were a lot of fast small dogs there. Big well done to Megan and Hattie for not only getting a clear in jumping but a 9th in small G1 agility in a big class at their first show of the year - yay go Hattie!!
The pic below is my pony who I caught trying to have a sneaky sleep! 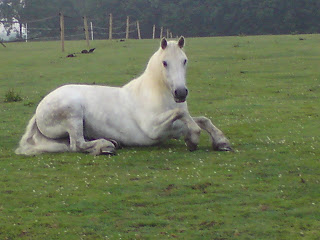 We had a bit of a frustrating weekend at Axstane! Matthew said that Bracken was WILD on saturday and pretty uncontrollable!! They did however pair with Lian and Saturn for the Eukanuba pairs and they got 2nd which is brilliant as again it was such a big class. There is a cute picture of the two dogs on Lians blog although Brax does have a wicked glint in her eye!! The rest of sat was a disaster for Brax with her coming out of the weaves 3 times in the jumping which is very unlike her.

On sunday we didn't do much better, Brax messed up her dog walk contact in agility and went round a jump in the jumping class but redeemed herself by coming 3rd in a massively competitive jumping and tunnels class!

Brodie did two lovely clear rounds and was lying in 2nd for the agility so imagine my disappointment when they only placed to first!! Worst thing was if it had been a combined 1-3 instead of graded he would have been 5th overall! Same thing happened in the jumping as he did a lovely clear and was lying in 8th but the placings went to 6th. I think its called sod's law!! I was really pleased with him as it was a hot day and he tried really hard.
Posted by Rhoda at 12:05 1 comment:

I finally got a short video of Rio (Atroya Ritzy Rio is his posh name!) doing some training. He really enjoys agility, especially the contacts but can't get to grips with weaves!! Fortunately I can run him in the paddock at work and keep training short and sweet as he tires quickly.
Posted by Rhoda at 19:23 No comments: 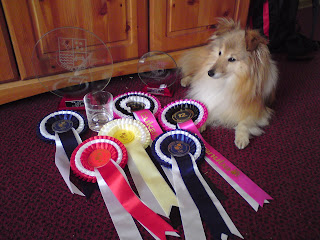 Sorry forgot to add a pic - here is Brax with their rosettes from Thames
Posted by Rhoda at 11:39 1 comment:
The dogs had a fun weekend at Thames show and wow was it hot!! I resemble a stripy lobster this morning, despite the use of sun cream - possibly growing up in Scotland did not prepare me well for the hot days here!!

Brax was a little superstar all weekend but I have always said she is solar powered as the heat seems to suit her well. On the saturday she managed a 12th in the C1-7 Euk mini agility and got 2nd in the Euk pairs partnered by Lian and Saturn. I'm so proud of them all as there was 115 pairs and both shelties tried their heart out. Lian has a video of the pairs run on her blog which is http://theknightsmixedbunch.blogspot.com/ From the video you can see Brax nearly misses her weave entry but Matthew managed to pull it off and not stand on her!

On the sunday, Brodie had done all his runs by 2pm and Brax hadn't done any! Brodie and I had a blast in the C1-7 Olympia agility as it was a nice course and I think its good to test some of the handling skills that you don't get to try in 1-2 classes. He did me proud except missing his dog walk (my fault tho!) and the last jump (prob his fault!). Anyway, he redeemed himself by getting 3rd in the graded 1-2 agility. Yet again we got eliminated in the jumping as I pushed him into the wrong end of the tunnel! He tried hard tho so I was pleased as he hadn't competed for a few weeks.

Brax on the sunday was fab! She won the grade 5 jumping and got 15th in the Olympia 1-7 agility-pretty good as there was over 200 dogs in it! She also got 12th in C3-5 agility but the best thing of the day was that she a proper 2 on 2 off contact AT A SHOW!!!!! Matthew held her on it for ages hence 12th but it was worth it!

Anyway, at the moment I am sitting quietly not wanting to upset my sunburn and the dogs have had a walk and are now fast asleep. Next week we are off the Axstane and Brodie and I are trying a Special Connection class - whatever that is...!!
Posted by Rhoda at 11:20 1 comment:

As we had a weekend off from competing, Matthew decided to practice Brackens contacts in the house. I managed to get a video of it but blink and you may miss it! We had a nice weekend but I did have the feeling I should be doing something dog related! Both of the dogs are much more energetic today than normal as well, despite two good walks yesterday.
Posted by Rhoda at 11:21 1 comment:

We had a weekend off agility competitions and while Matthew was off being in charge of a stag do, me and the woofs spent Sunday at Sheltie Camp! This is the third year that I have been and it is so fun to meet up with sheltie mad people and have a go at all of the different activites.

The trainers are brilliant and encourage everyone to have a go at agility, obedience, scent work and heel work to music. I did a bit with both dogs and it is fun for them too. Brodie has been going since he was a puppy and has learnt a lot over the years. It was amazing to see that despite not doing any tracking work since last year, both dogs were able to locate various objects that Trisha was placing in the grass. Even Brodie was quite good this year!!

The agility training was fun as it gave me the chance to reinforce Brax on her contacts in a environment that is very similar to a competition. With Beckys help I was doing running contacts with Brodie and he was striding them well which was reassuring to learn. However a lot of it is to do with the speed I'm going at and my position, so I've got something to work at!
Posted by Rhoda at 13:54 No comments:
Newer Posts Older Posts Home
Subscribe to: Posts (Atom)