The less said about Axstane the better...it was a disaster from beginning to end really! Firstly Bru's jumping clashed with Sparks champ agility which made it a bit stressful. Bru's course was really not flowing for a young dog but he made his own course up anyway haha! Spark was in post season brain fart so I wasn't expecting wonders but she worked ok apart from coming out of her weaves which is really unusual. Here is her agility run...long jump was my fault as I gave her quite a late command. Really pleased with her wrong end of tunnel though!

Brooke had a course not as flowing as Sparks for her champ agility, unfortunately she was drawn to run straight after Lian and Bru's brother Siri. Well it just totally blew Brookes brains entirely! She wouldn't settle on the start line and then flew over the aframe, landed in a heap and then ran out of the ring to find her Grandma! 😞

In champ jumping Spark came out of her weaves again which made me realise there might be an issue. (Luckily both girls were booked for a mid season check with the physio on the Monday. Sure enough Spark was a bit tight and Brooke was sore from her dive over the aframe. No show this last weekend so Brooke has had a good rest and lots of taking it easy!)

We walked the boys tunnels and jumps course and decided it was squashed up and silly so we went home in a bit of a strop! Poor Toad hadn't got to do anything so I took him the the field during the week and gave him a run around 💙

In between the two Quadpaws weekends Bru went on a two day mini camp at Dans! It was brilliant for Matt to have taken the time off to work him and he was the only small dog and also the youngest invited on camp so we were hoping he wouldn't disgrace himself! 😂 He was absolutely AMAZING! He had been bumped out of the puppy group and ended up in the 3-5 group but held him own and worked really well...here are a couple of videos


I also got to borrow Trek for a couple of runs which was fun! I always love borrowing dogs as it really tests my handling!

So the next two weekends we spent at Quadpaws which was great for some NFC contacts with Bru, Spark was out of action due to coming into season early, Brodie and Brooke had a few runs and Matt ran Helens Toby in Masters! The first Saturday was the Beginners Steeplechase qualifier and Bru WON it so is off to the Grand Finals at the end of October! 💛 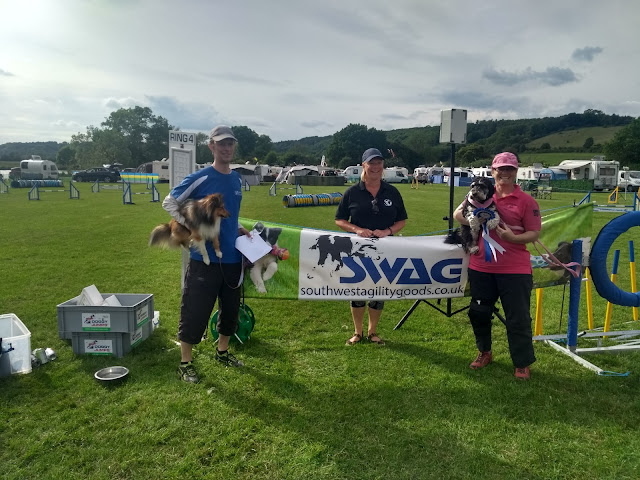 Matt did really well with Toby in Masters as well, he was clear in the jumping with a wobble before the weaves but unfortunately had faults in the agility. Both courses were tricky! Here is there jumping run

Brodie had so much fun in casual, here is his 2nd place!

And I managed to win a couple of jumpings with Brooke bean!

Bru's contacts are coming on nicely, here is him playing nfc doing dog walk and aframe

We had a long weekend in Scotland in May as well! We stopped on the way up in Berwick upon Tweed and had a walk, some putting and some chips :-) Brax didn't do the walk but she did go down a slide haha!! 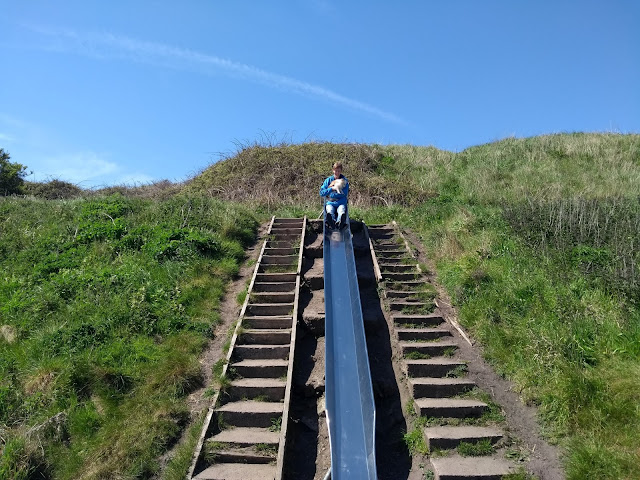 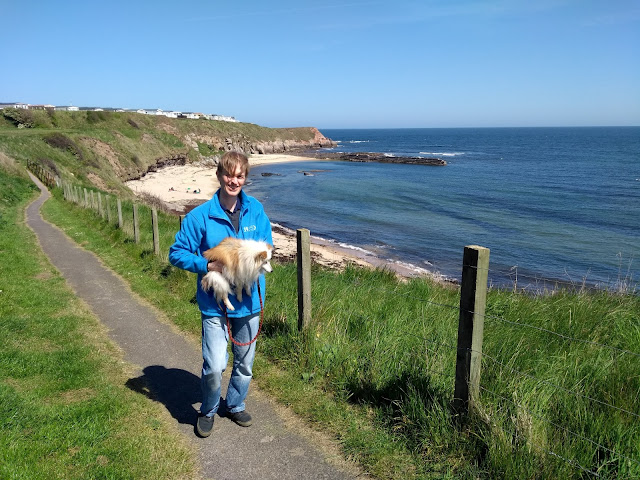 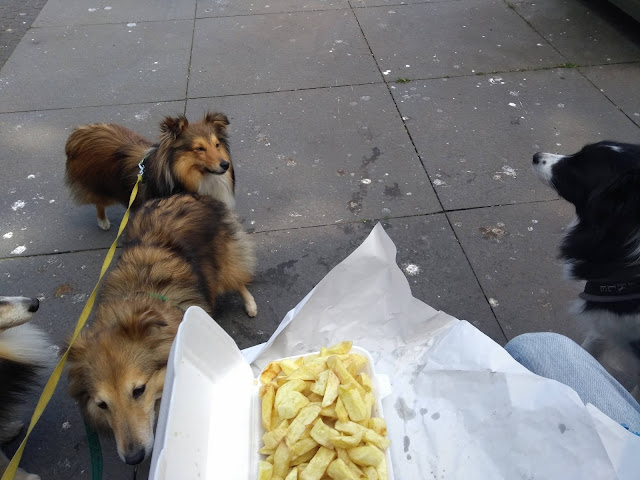 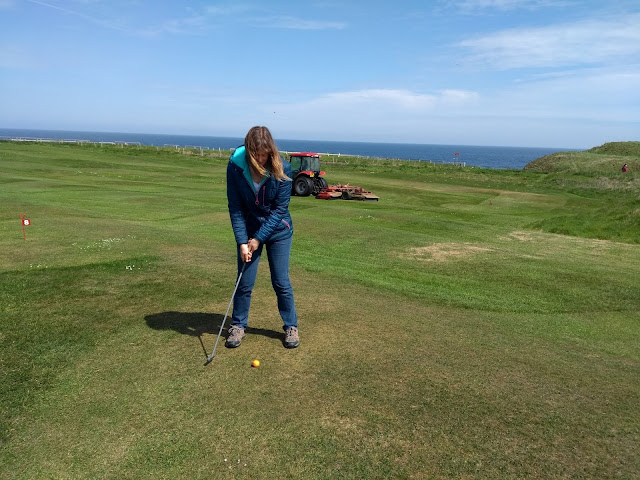 Needless to say Matthew won the putting competition but it was a close fought battle!

We enjoyed seeing my Dad and little sis on the Saturday, we played some games and had a walk on the beach (despite the tide being right in we found some sand!) and in the evening had an amazing meal out as a Birthday celebration! Matt, me and Amy all have birthdays within ten days on each other! The lovely couple that own the restaurant had made a chocolate birthday cake (he is a master chocolatier!) and look at the little decoration on the top!! 💕 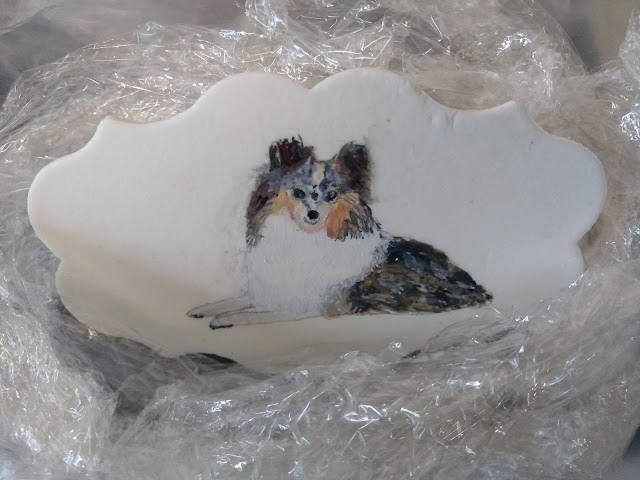 The shelties found being on holiday exhausting! 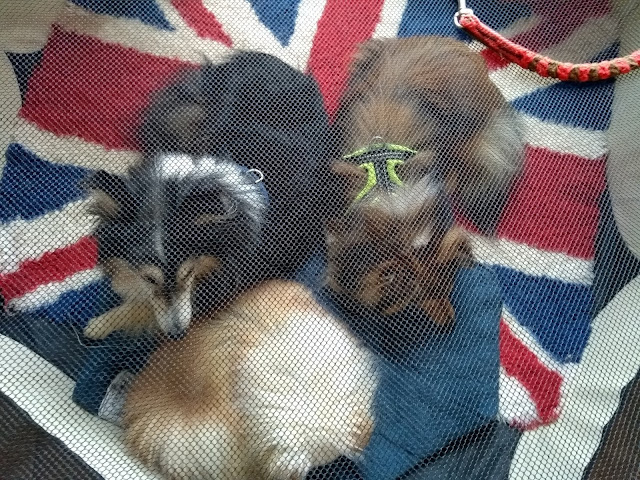 Walkies with my sis and the boys! 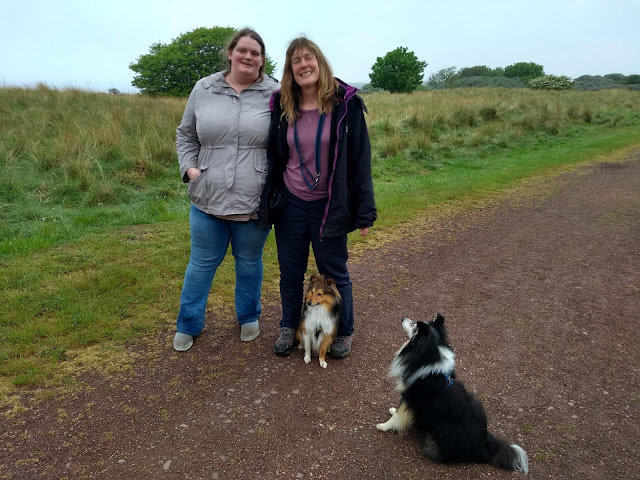 Bit of Molky on the lawn 😁 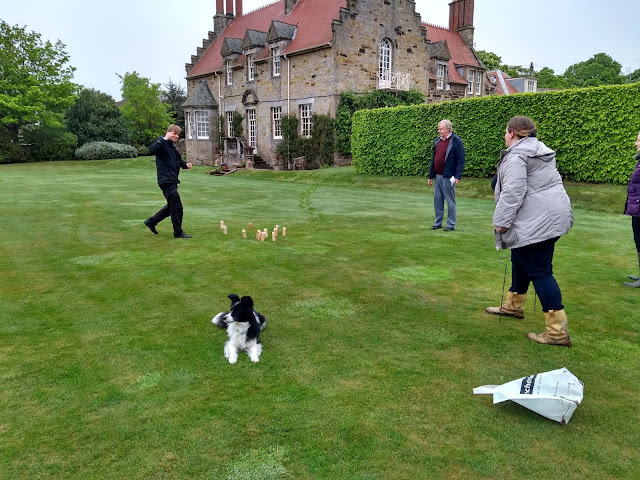 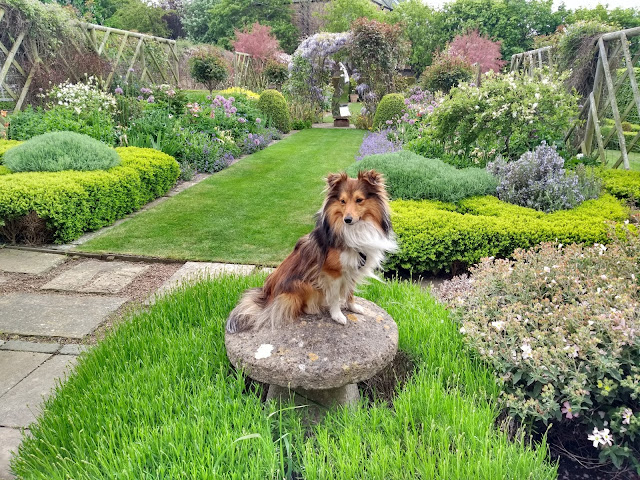 On the Sunday we went to SKC agility show at Ingliston. The girls were both in champ and the boys had a lower height jumping each. Bru got weaves second time! Brooke had a great time in the champ jumping but took the back pole off the spread. Spark managed to get 2nd which I was really pleased with as the course was tight and twisty...not what we usually do well on!

We had a refusal in the agility but made the final...that is 3 finals in 4 champs now! Unfortunately she had the tyre at the start of the final so it all went a bit wrong but I was pleased with how she ran!

A big Birthday and Beacon Champ

Sorry I'm still trying to catch up with my blog posts...May was such an amazing month! 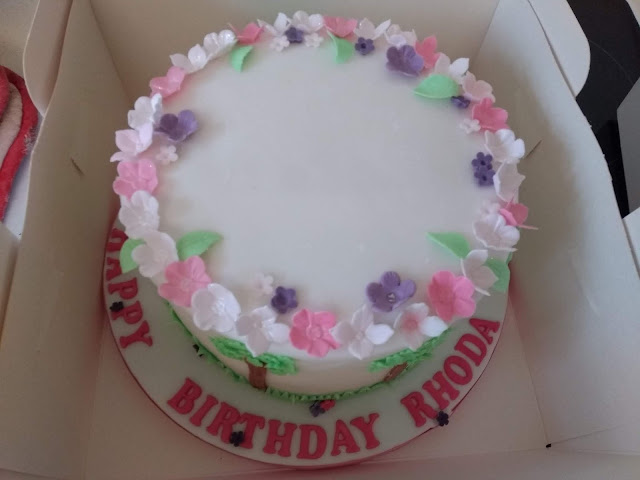 Matthew and I both celebrated a big Birthday within ten days of each other! You can imagine my surprise when one of my super lovely clients turned up with this stunning cake 😍 It was so beautiful and very tasty! On my actual birthday we went to Beacon champ show, Bru did one jumping run (missed weaves again!) and the girls were both doing champ. The jumping was such a tricky course and I was fully expecting an E but apart from almost losing Spark at the start she did really well until she ran past the last jump!! This is starting to be a bit of an issue so I'm trying different things to fix it. Brooke had a super time and would have been 5th in the jumping but had the first pole (one of her issues!)

Here is Brookes jumping, look at the pull through!!

The agility course was more flowing and Spark managed a clear and 4th!! She managed to get both turns off the dog walk and aframe! Brooke had a cheeky dog walk but both girls made the final! Unfortunately its fair to say that the champ final course was not our cup of tea, both girls got E'd but here is Sparks attempt. I knew she would run past the seesaw from that angle! So pleased with how they both did though

Fab Kent, Vyne and a week off!

We had fun at a Fab show on the Bank Holiday weekend, the main aim was to NFC some contacts for Bru and compete our friend's dogs in the IFCS qualifiers. The girls and Toad did some jumping runs and the girls NFC'd the agility as we could reward waits and contacts with food.

The boys are Spark all won a class, what clever doglets! 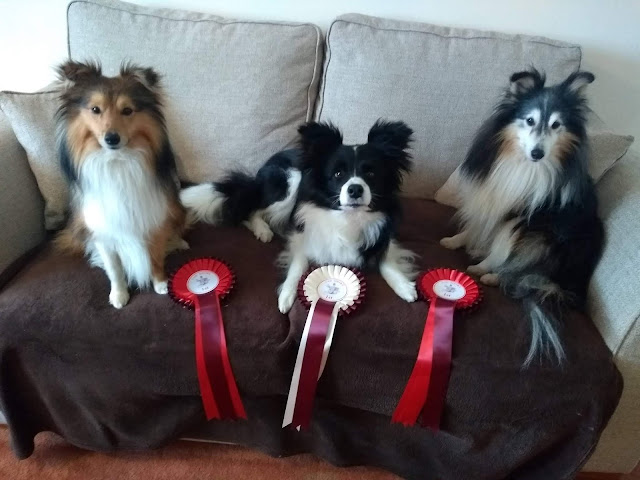 Bru's contacts are coming along really nicely! How he can do a five stride dog walk is beyond me!!  Here is his NFC run

Matt and I were also running Toby and Trek in the IFCS agility and snooker qualifiers. Matt did really well and came 3rd in both of them! I hadn't run Trek at a show before but he was a really good boy and we came 2nd in Snooker and had a great E in the agility. It was weird but fun running a large dog, I love the air time!! Here is a our agility run

We did Vyne on the Bank Holiday Monday and the gingers were on fire! Spark got E'd in both parts of champ...oops! Brooke was 11th in champ agility and only had a refusal in the jumping so made the final! She got E'd but was running really nicely. Here is her champ agility run

Bru had a great C1-2 jumping course and although he messed up at the weaves the rest was brilliant! And he did get is weaves eventually!

I had the week off to see my Mum and we had such a lovely time! Unfortunately it was really wet when she was staying but we enjoyed some nice walks anyway and also went up to London to the Opera House to see a ballet including Medusa which was being newly performed. It was very good!

The first four pics are at Hatfield House featuring an amazing fountain which moves very slowly and frame the house really well. We had a very soggy walk!! 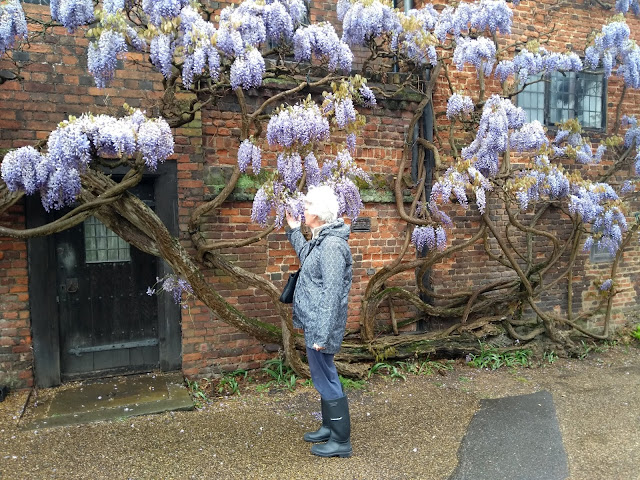 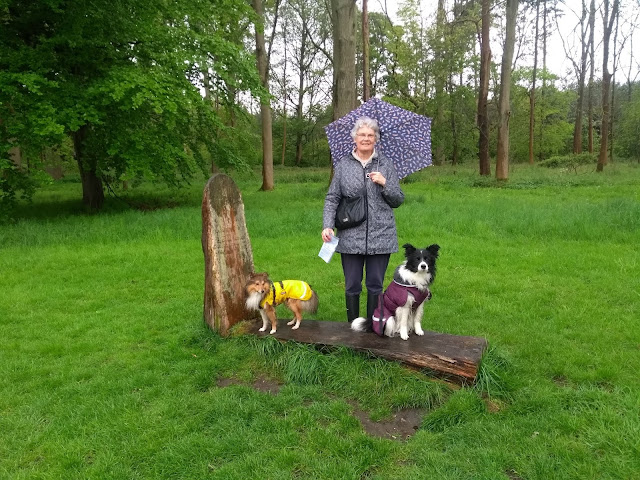 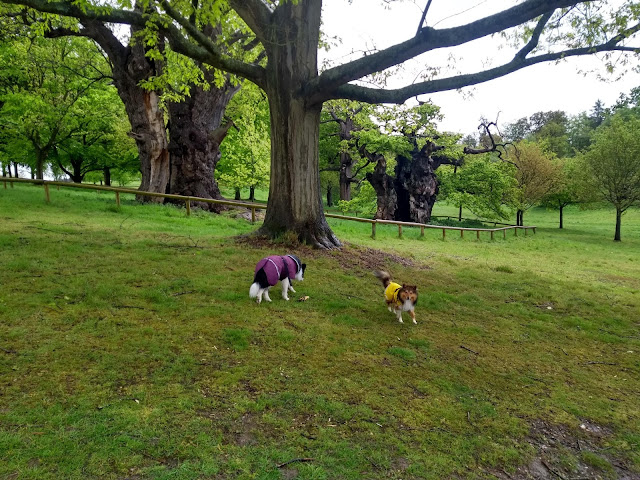 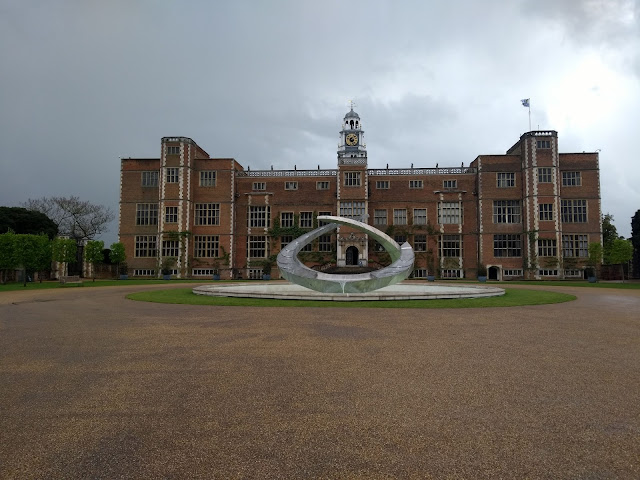 We also went to Ashridge and some nearby Bluebell woods, it was drier for this walk luckily! 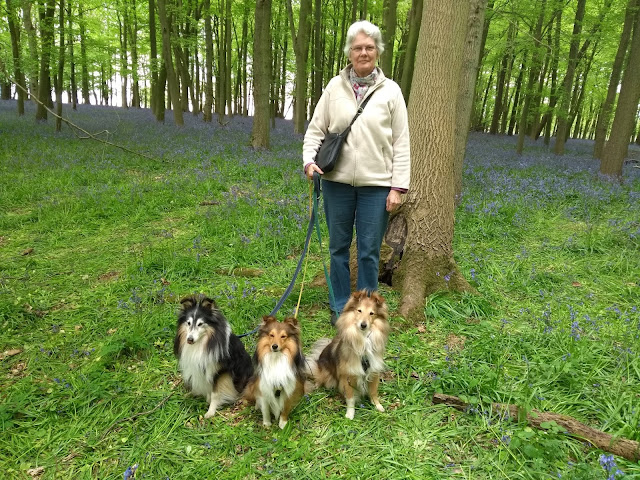 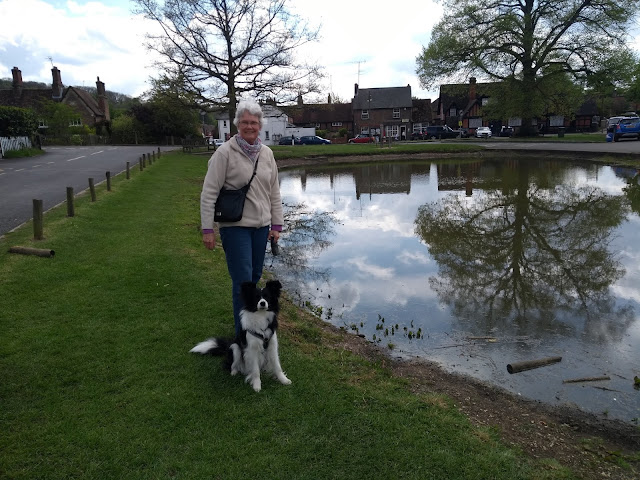 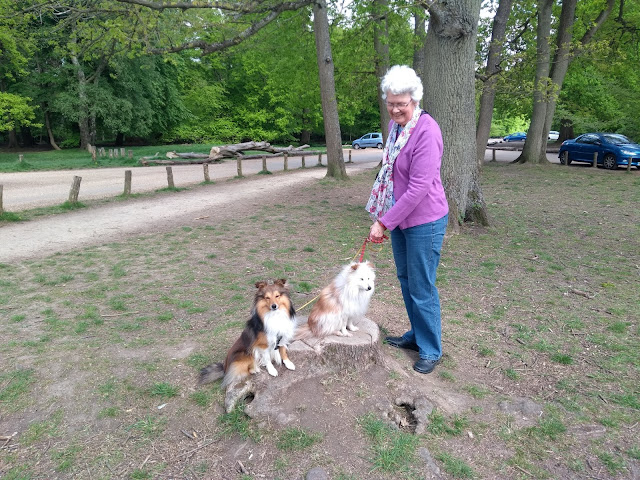 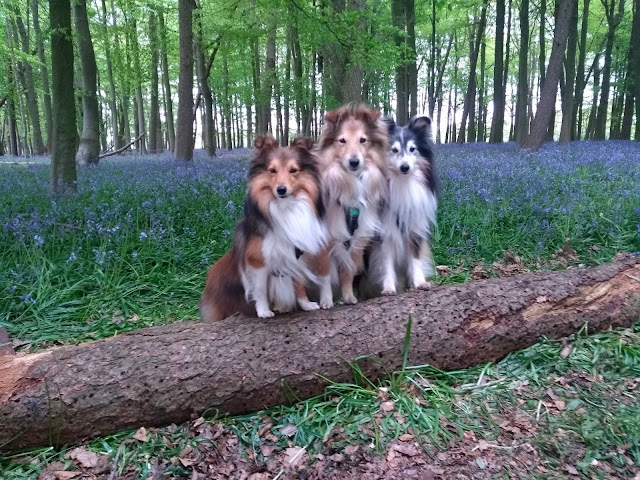