We have had a very busy week with a couple of meals out, 2 AGM's to attend and some agility training! We did managed to get to training on tuesday but unfortunately the indoor arena has been all done up with a new surface which is probably fabulous to ride on but is not great for long haired dogs. The waxy sand really got stuck in their coats and took each dog about four washes to get the worst out!
We went to the Letchworth DTC AGM on thursday and Brax won the small dog points trophy. Lisa and her gorgeous merle sheltie Tyler won the medium trophy so clever shelties all round!

We had the ESSC (English Shetland Sheepdog Soc) working section AGM yesterday and it was so exciting to see all of our sheltie friends! After the meeting we had lunch and played some fun games with our shelties. These included recall races, musical papers (like musical chairs but you have to stanf on a piece of newspaper with your dog) and one of the funniest which was getting the right number of feet on the floor out of 6 feet (you and your dog). So if it was four feet, you had to arrange your dog into only having two feet on the floor or three feet and stand on one leg yourself. It was a hilarious party game although I suspect the shelties all thought we had gone mad!!

The annual awards were announced as well and we are so proud of our two woofs. Brodie won the Foula trophy for the best agility starter which Bracken had won last year. Here is a pic of him looking very pleased with himself! 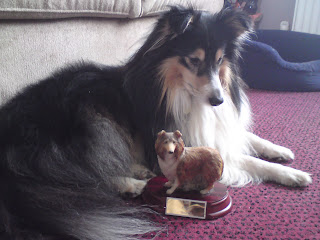 Bracken came away with three beautiful trophies! The Suky trophy for the best novice (G3-5) agility dog, the Night Shadow trophy for overall agility points and the Tony Seys trophy for overall sheltie of the year. We feel very honoured to have won them as there are some amazing dogs names on them. We can't believe that our gorgeous, fiesty little pet has won such illustrious prizes but then Brax never ceases to amaze us! It was lovely to have Brackens breeder June Warnes sitting with us when Bracken got her awards presented and we have to thank her for breeding such a super girly! 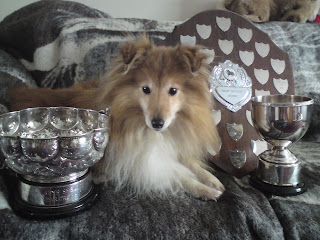 Brodie's points meant that he came 4th for the Night Shadow trophy and 5th for the Sheltie of the Year so I'm very proud of my wee man as he is young yet. After such a busy day out playing party games, the woofs just wanted to sleep! 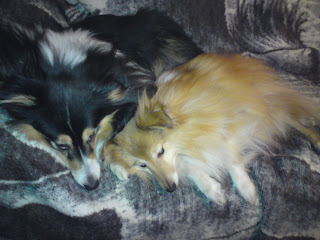 I have just found out for definite that Brodie has qualified for this years Agility Club Starters Challenge! Yay Brods!! He did so well in it last year (coming 2nd) so to be honest, its just fun this year to be in the final and hopefully less stressful having done it once already!

We are off to training tonight and will try running Brax to see how she gets on. She doesn't seem to have lost too much fitness after having two weeks off but we have a training day with Dave Jolly in a couple of weekends time so need to get her working even if its just 20 minutes. I think the same about Max pony, its better to do 15-20mins productive work than carrying on and getting nowhere. I often only do 5 mins here and there at work between training classes, answering the phone and seeing customers! Although Brax would work all day, Brodie is very different and struggles if he works for too long but he is getting more stamina with age.
Posted by Rhoda at 18:46 1 comment: 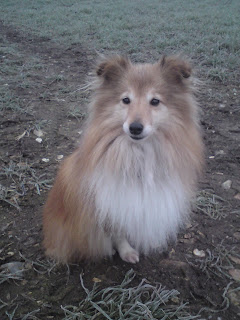 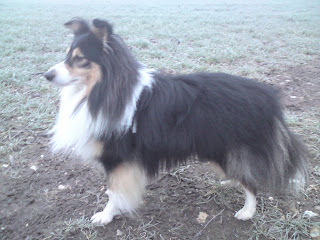 Brax is definitely on the mend now and is getting back to her normal, fiesty self! I had a lovely frosty walk with the dogs this morning and it was the first time I have let Bracken off since she was poorly. She has a really nice run around but seems tired now so we'll have to work on her fitness. Brodie on the other hand is full of beans and raring to go! In fact after sorting Max this morning (too icy to ride again-grr!) I decided to go for a run and Brodie came too. I pop him on a harness and put a training lead over my shoulder so I'm 'hands free' to run. We only did about 3 miles at a jog but Brodie would have done twice that!

Brax was also allowed her favourite treat yesterday as she no longer has her bucket on her head! She loves nothing better than to climb into an empty dog food bag!! 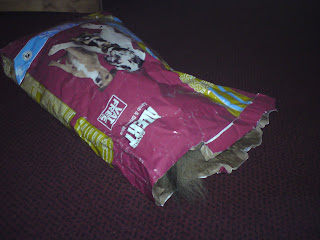 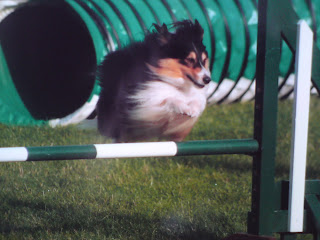 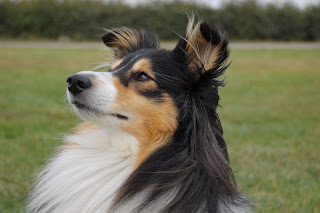 My wee Brodie is 3 years old today! I can't believe it as the time has just flown by so quickly. We are going training tonight and is going to have a special chew for his dinner! Brodie is such a special dog, he is so affectionate, willing to please and a real pleasure to own. Plus I think he's very handsome although I'm possibly biased!

Bracken has just been to the vet and has had her stitches out and is allowed to have her bucket off so she is running around the house like a lunatic picking up every toy she can! Hopefully she can get back to training in the next week.
Posted by Rhoda at 18:40 No comments: 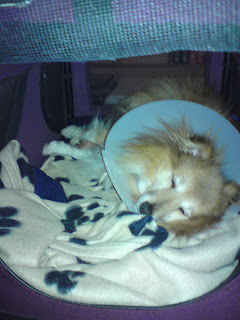 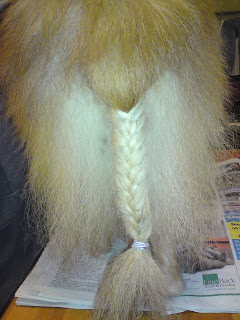 Brax is now doing some little walks and is due to get her stitches out this week. As the area is healing so nicely however, the scab is getting very itchy so we are still watching her intently to stop her scooting on her bottom! I took her purple tail bandage off yesterday (possibly cut a bit of tail hair as well-oops!) and rather than put another bandage on it, I decided to put my plaiting skills to good use! I'm sure her tail would be ok left down but just in case her tail hair made the area dirty, I have done a horsey tail plait to keep it out of the way. She does look funny with her bucket on her head and her little stick of a tail! Brodie is very concerned about his sister and keeps sticking his head in her bucket and kissing her - awww. 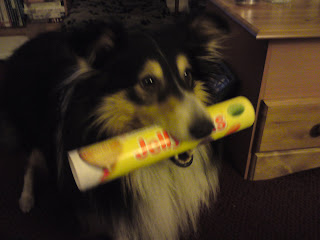 Brax being out of action has meant that Brodie has been perfecting his some of his skills. This is him practising a 'hold' with cardboard tube - he does love to work! Brodies motto is work hard, play hard and then sleep lots!! 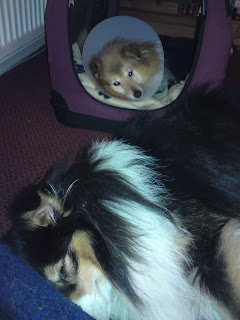 After a busy day at work I got home to find a pile of post and the top letter was for Bracken!! Awww, what a nice surprise from Saturn her pairs partner (clever boy - always knew shelties were smart) which was a homemade card with the cutest picture on it of Saturn holding a daffodil. Thanks so much to Saturn and his mum Lian for cheering up wee Brax!!
Posted by Rhoda at 19:13 No comments:

Little Brax is a bit better today and doesn't seem to be quite as sore. She went back to the vet who says she is doing well but NOT to let her scoot on her bum - arrgghhh!!! Anyone who knows Bracken will know that she is very fast at scooting and will go for miles on her bum!! We will have to watch her all the time and crate her if shes unsupervised as the vet warned she'll want to scoot more as it heals and gets itchy. Oh and her buster collar has to stay on for a least another 10 days so hopefully she'll learn to negotiate the furniture by then!
Posted by Rhoda at 19:15 2 comments: 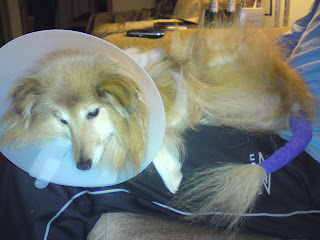 Bracken is having a bad week. She seemed to be scooting on her bottom more than normal and appearing constipated but on investigation, we found that she had an abscess on her anal gland. Poor Brax! She had to stay at the vets yesterday to have it cleaned out and drained properly. The abscess was huge, about the size of a 50p and the vet has stitched one side and left the other side open to drain. Brax is on loads of drug and is very cross about having to wear a buster collar and a purple bandage on her tail! The vet was very kind and saved as much butt hair as possible! Unfortunately though she is on cage rest for three days and then not allowed to do much, certainly no agility for 2 weeks :(
Posted by Rhoda at 19:06 1 comment: 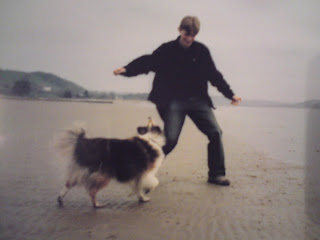 I was looking through some old photos the other day and came across these pics of my old girly Bramble. I'm afraid that they are photos of photos so they are not great quality but she is the sheltie that started it all! She never did proper agility as she would have only just measured large and struggled over a whole course of bigger jumps. She did love her jumping though!! She was a whizz at jumping picnic tables and benches in the local park. Bramble was a wonderful aunty to Bracken and kept her in line when she was a puppy. Bramble was my 13th birthday pressie and the best one ever!! 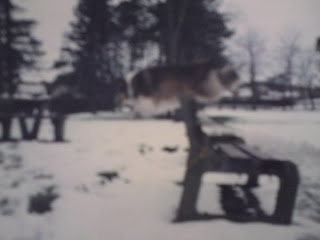 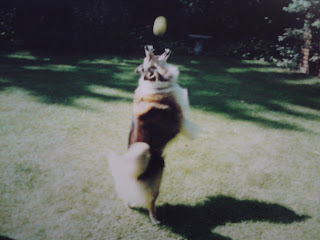