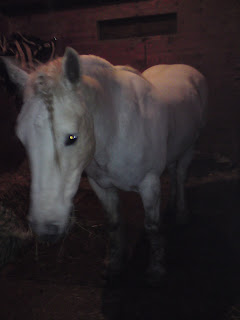 Thought I'd pop this on the blog for all the people who have never seen Max looking clean! He is grey really and not muddy brown coloured!! I have just had a riding lesson and realise how unfit we both are after a couple of weeks off with the snow. Better start running again...!
Posted by Rhoda at 19:12 No comments:
Labels: Max actually looking clean 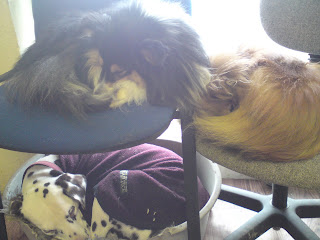 I took this pic at work yesterday as I couldn't resist, they all looked so cute curled up together! Bracken really wanted to snuggle up on the same chair as Brodie but had to make do with the old swivel chair! Spot the dalmatian is owned by my boss and can fit into any of the sheltie sized beds quite easily.
Posted by Rhoda at 19:07 No comments:
Labels: Sleepy dogs

We had a club competition last night at Letchworth and I took Brodie along really to get a bit of experience walking courses. As he has been promoted recently to class 4 he had to compete with the medium dogs that have lots of competitions under their belts! He did me proud though and got two clears, coming 2nd in Agility and either 1st or 2nd in Jumping (unf I couldn't stay to find out the final result). He was really attentive and enjoyed both runs so fingers crossed when we start competing in March!
Posted by Rhoda at 18:54 1 comment:

Its been such nice weather this week that we managed to squeeze in a bit of training at work on my lunch breaks. I got Matthew to video a couple of exercises as its useful to see how I can improve my handling (first thing I've figured is don't wear big boots when running!!) Brodie needs to build up confidence on rear crosses as his directional commands are a bit hit and miss occasionally! We ran the same exercise but once with me crossing behind and once in front. Sorry about the quality of the video, it was taken on my mobile and it was into the sun as well.

Brax is a nightmare with empty Burns food bags! She has to dive into them and not surface again until she feels its totally licked clean. I tried to get a video of her diving in one but shes so fast you can hardly see her!!

Posted by Rhoda at 11:05 No comments:
Labels: Bag Monster 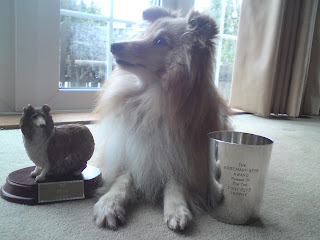 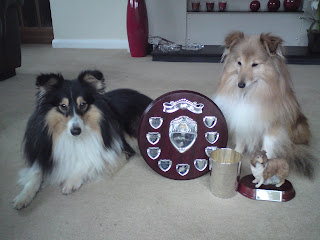 We are so proud of the dogs! We went to the Shetland Sheepdog Working Section AGM yesterday where they presented the annual awards for points gained competing in various disciplines.

Bracken had mostly done Agility competitions and Brodie had done Obedience and Breed classes as he was too young to do Agility. Bracken won the Foula trophy for best Grade 1-2 Agility dog and was awarded the Rosemary Seys Trophy which meant she was runner up on overall points gained for the year! Brodie won the Pixham Shield which was for best opposite sex in breed classes and obedience combined. They came to the AGM too and really enjoyed meeting up with their sheltie friends!
Posted by Rhoda at 10:45 1 comment: 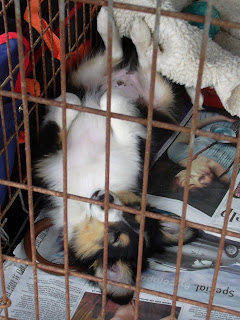 This photo was taken at the Sheltie Agility show in 2007 when Brodie was only a few weeks old. Even at that age he was good at taking it easy...
Posted by Rhoda at 18:46 No comments: 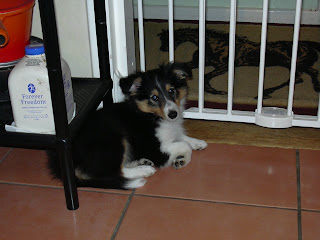 Aww I can't believe it, Brodie two years old today! He has had a bit of a rubbish birthday to be honest as our walk this morning was very icy and I caouldn't walk at our normal pace and this evenings walk was similar with a bit of mud thrown in for good measure! The roads are so flooded that we're not even going training tonight :-(

Did find Brodie puppy pics though!
Posted by Rhoda at 18:36 1 comment: 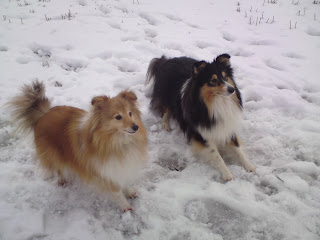 I was trying to catch the dogs jumping in the air to catch snowballs that Matt was throwing but my timing was terrible and this was the best non blurry attempt! I love the way Brodie crouches right down to pounce!
Posted by Rhoda at 10:40 1 comment: 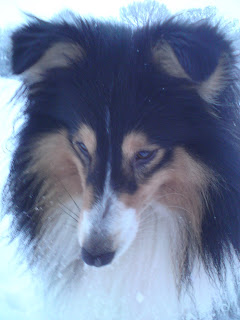 I love this pic I took of Brodie as I was walking to work last week in all the snow. He thought it was so much fun to chase snowballs! It only takes 25 minutes to walk usually but in the snow it was hard going and took more like 40 mins as it was like walking in sand dunes!

Bracken is not so keen on the snow as its hard walking in it when you are only 11 inches high! Also it has meant no agility training for 2 weeks now :-(
Posted by Rhoda at 10:36 No comments:

I am fed up of the snow now, dog walks have turned into a battle to stay upright and I have barely seen poor pony for the last week. Fortunately I have loads of great friends who have looked after him for me. Bracken hates the snow with a passion but Brodie thinks its brilliant fun! Photos to follow soon...
Posted by Rhoda at 18:19 No comments:
Newer Posts Older Posts Home
Subscribe to: Posts (Atom)