Brodie has won into Grade 7!!!

This will be a short update after our mega agility holiday as I need to sort out videos and pics. We went to Dashin Dogs for three days and then onto the Summer Open show. The dogs worked really well and Brodie got his last Grade 6 win on a tricky 6-7 course at Dashin Dogs. I can't believe he has only been Grade 6 for 5 weeks!! He will be Grade 7 in time for the end of the season so we will get some training in over winter and who knows, maybe try our hand (or paw) at a couple of champ classes next year?! Quick well dones to Megan and Hattie who won into Grade 2 at Summer Open and also Lisa and Dylan who won into Grade 4. Both very well deserved wins!! Proper update soon...
Posted by Rhoda at 19:51 1 comment:

We had decided after doing the KC Festival last year that we would try a different show this year that wasn't quite as big and stressful. Hare n Hounds was a lovely show (although it was a long way to go) it was worth it for a 2 min walk between the rings and the car, a real ale tent and a relaxing atmosphere!!
Brax did really well and got six wins and numerous placings! Here is a video of her winning a C1-7 jumping class. Brodie got 8th on this course as well.

All of the classes were C1-7 or C4-7 apart from one graded class on the sunday. Brodie did well to get three placings considering he was up against 3 agility champions (and 3 fast collies) in all of his classes!! Considering the courses were relatively flowing and not too taxing, I was most pleased by the fact that Brodie was one out of the places 5 times and the majority of the time he was the fastest clear that wasn't a Grade 7. This is Brodie doing a C1-7 agility and me being a bit rusty after a couple of weeks off - looking back at the video I didn't give him enough warning about the turn before the weaves!

Big congratulations must go to all our friends who did so well at the KC Festival, in particular Jackie and Mr George who have qualified for the Starters Cup at Discover Dogs :)
Posted by Rhoda at 19:39 1 comment:

We have had a relaxing weekend without doing agility but it did feel weird on Sunday not to be getting up early! We decided to go off to the cinema after taking the dogs for a nice walk. I had a fab day yesterday, catching up with an old school friend. We had a meal out and did a couple of nice dog walks, including one to the local pub as the weather was lovely :)

What was really obvious was that the shelties were far more unsettled than normal as they hadn't been out at a 'party' all weekend! Oh well, they'll be busy enough in the coming weeks!!
Posted by Rhoda at 06:45 No comments:

Wow we have been chasing our tails this weekend! On saturday Matthew took the dogs to the Agility Club show in Ardingly. Brax was a good girl and managed to get through to the Champ final but unfortunately flew her dog walk contact. Back to the contact school for little Miss B! However, we did realise that she has made it to final of every champ except one so at least she is relatively consistent!

The big news is that the Medium ESSC team has QUALIFIED FOR CRUFTS!!! The team was made up of Lian and Sing, Lisa and Tyler, Bernadette and Zen and Eleanor and Smo. What a great team!! Unfortunatley the smalls didn't qualify but I'm sure the meduims will do us Sheltie fans proud :D

I drove round the M25 on saturday to get to the show in time for the Starters Challenge which Brodie had qualified for last year. He started really well and was the fastest dog until the point that he fell off the seesaw! Awww poor Toad had a wimpy moment as the seesaw was pointing towards the crowd and it just spooked him. I made him go back on it and he was fine although he went into the wrong end of the tunnel as you can see him on Lians video looking at the crowd. He came 2nd in the final last year but was really affected afterwards and wouldn't run at all the next day. In fact it took over a month to get him running properly. I was hoping that the same wasn't going to happen this year and I'm pleased to say he was brilliant on sunday so major relief! Whereas many people struggle with contacts or weave entries, I know that Brodie is far more likely to spook at a judge running too close or someones dog barking at the ringside.
http://www.youtube.com/watch?v=docWjOlPRA0

We went back to Catton Hall on sunday to the Derbyshire show. Brodie was really on form, winning his graded 5-7 agility, getting 3rd in graded 5-7 jumping and a 4th in graded 4-7 jumping. That means that Brodie has now got 3 of his wins towards grade 7!! Although the show was in the same place as last weekend, the classes were much bigger with almost 50 in grade 6 mediums so I'm very proud of Brodie as there were some very good dogs there. Brax did a lovely agility run and then just missed her dog walk contact again (conact school asap!!) She did some fast clears in some other classes but missed out on a place. We are having a weekend off next weekend before the manic august and sept shows start! I think the dogs deserve a well earned rest too! 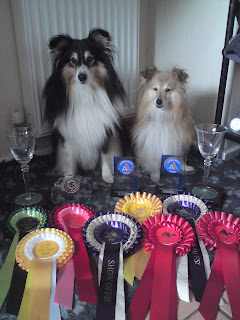