Wow the shelties did really well at the Breed and Obedience ESSC Spring Show!! My lovely Mr Toad dusted off his show lead and did me proud by winning the Special Open Working dog class and then coming 3rd (1st and 2nd were 'proper' obedience dogs!) in Beginners Obedience. To top it off it turned out that he had won the Miyrowan Salver for the dog with the highest obedience mark that was also placed in a breed class :) Love my little boy-who says men can't multi-task! ;-) 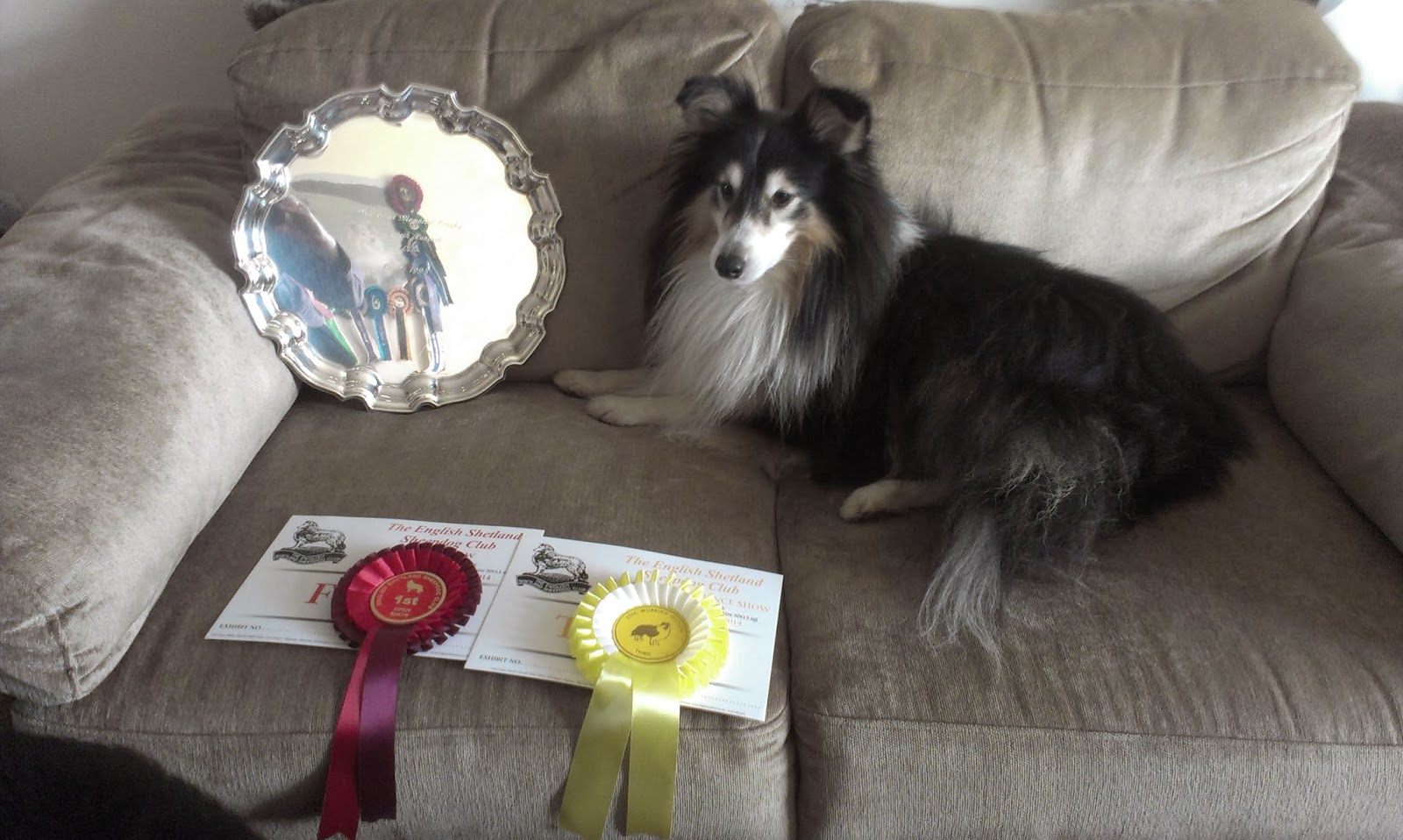 The girls did really well too-Brax was definitely the entertainment in the obedience ring!! How she came 4th is beyond me, mind you I didn't see all of her round as I was too busy crying with laughter!! In her recall she skidded straight through Matt's legs and ended up in a heap but somehow managed to sort herself out. She didn't spit the dumbell at MAtt but she did give it back and then do the most enormous 'bounce' (one of her fav tricks!) in celebration! Then in her heelwork she swaggered round yipping and as she as the steward said exercise over she got his trousers!! Naughty diddly! 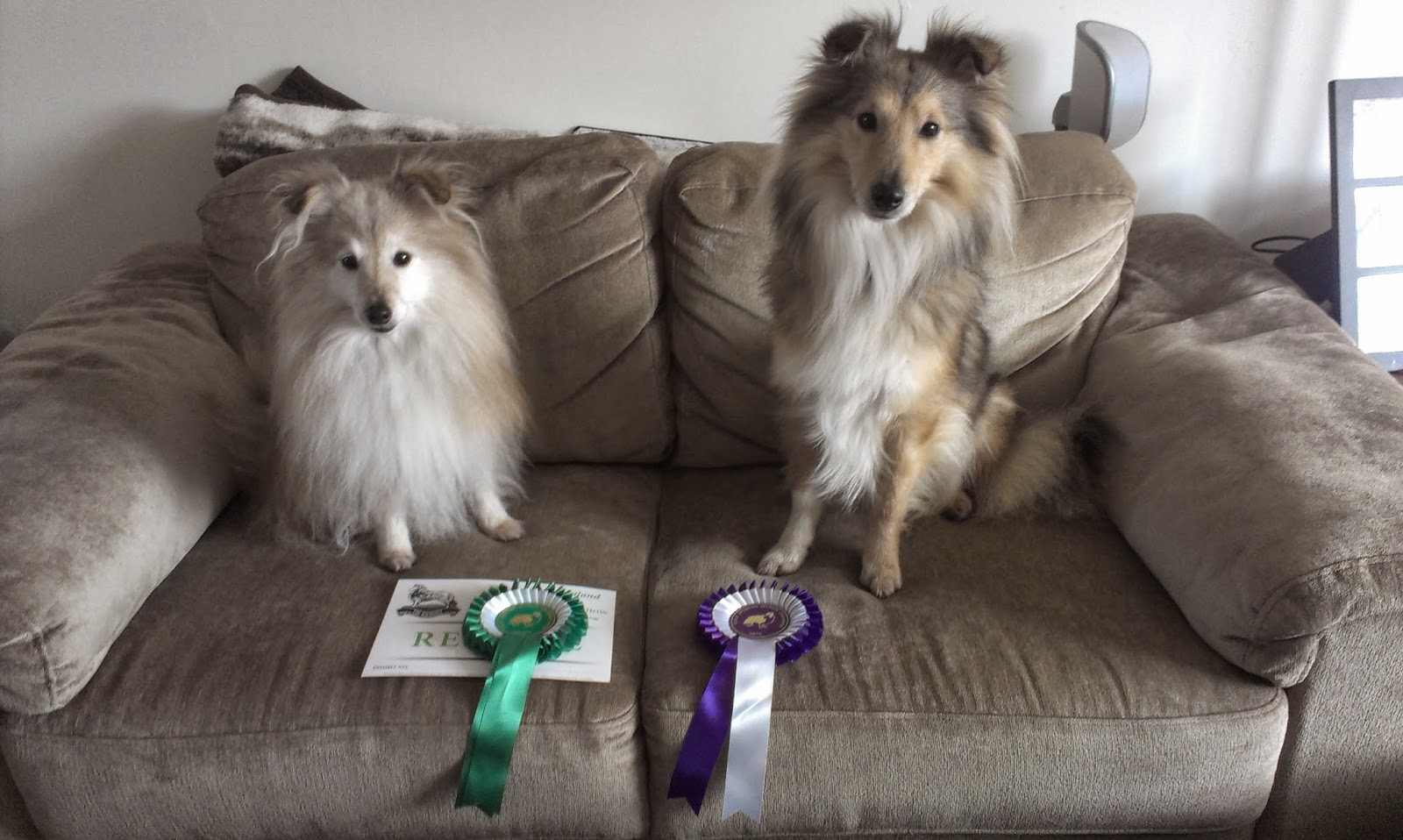 The handsome merle is Rommy and it was Jenni and Rommy's first go at obedience and they came 2nd in Pre-Beginners-yay!! He was brilliant and they worked through the tests like pros. 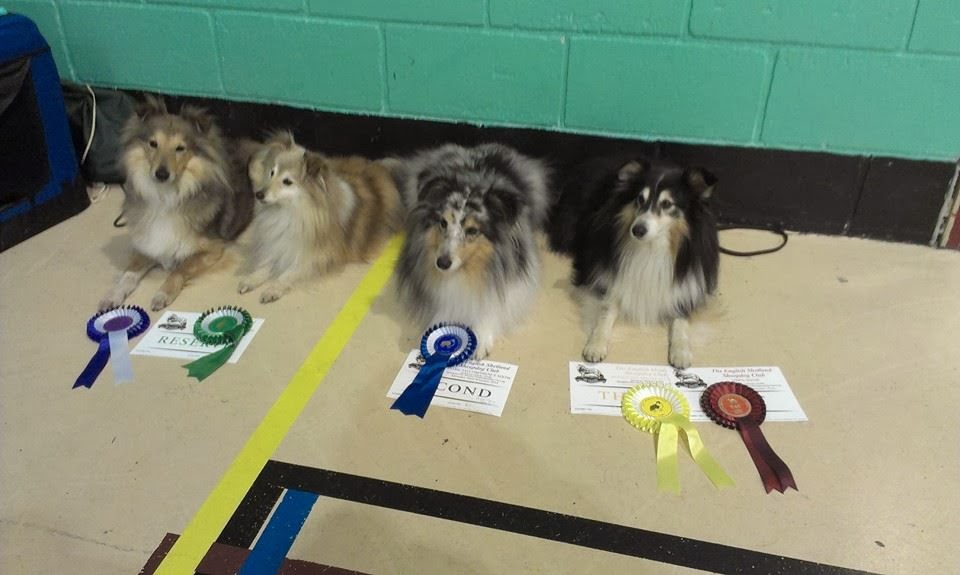 Brooke bean was a really good girl-she ended up 6th in Beginners because of the retrieve. She thinks its a game so she gets the object, comes most of the way back and then spits it out and goes 'throw it again!' Shame as her marks up until that point were amazing. We had a few people come up and say how much potential she has in obedience, especially in her heelwork. She is poetry in motion to watch (like watching a horse doing passage for all you horsey people!) She never made it into the breed ring as it clashed with the stays unfortunately. She was very tired after her busy day! 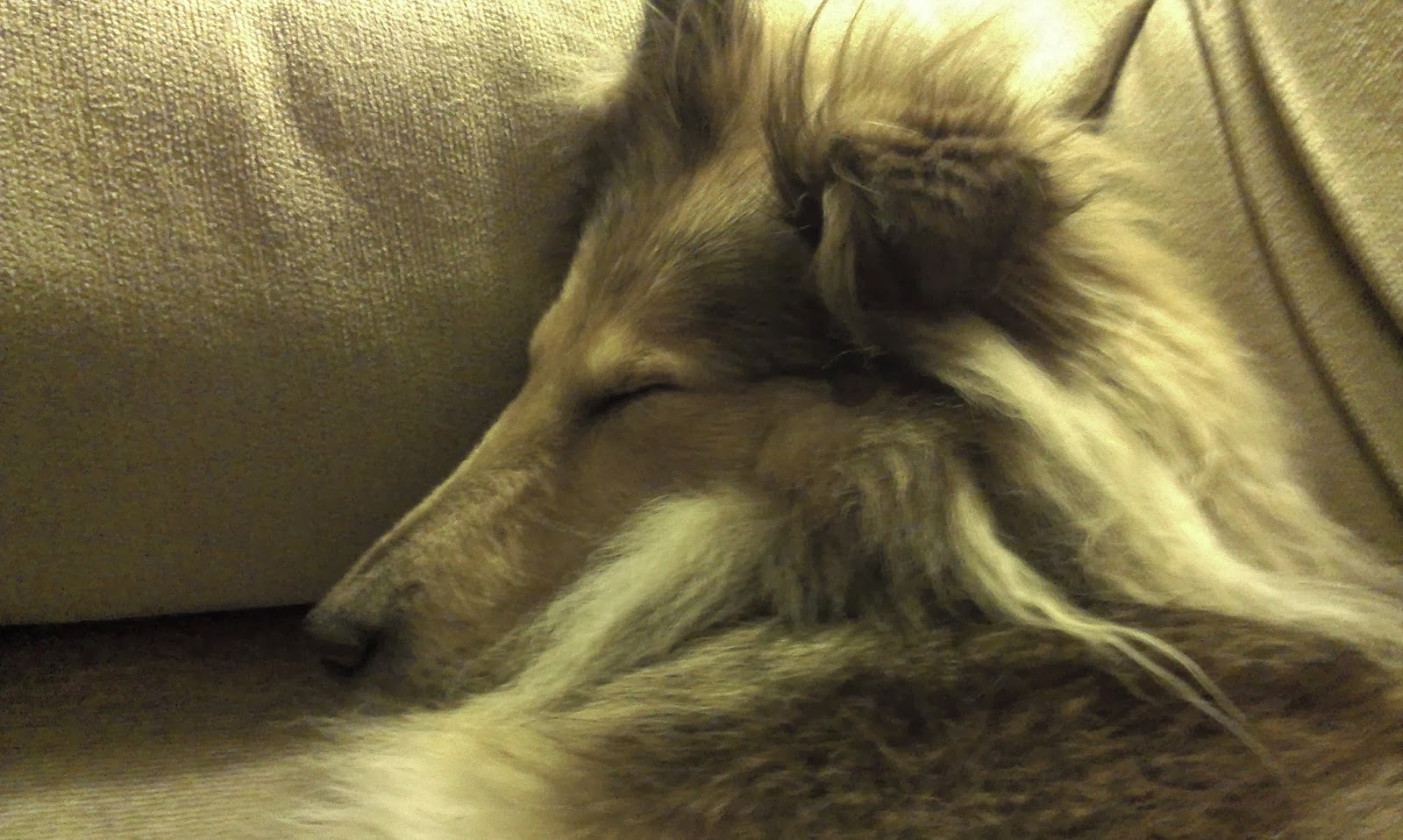 We have lovely Bailey staying with us at the moment-he is such a lovely dog and fits in so well with our lot. He loves his Uncle Matthew too :) 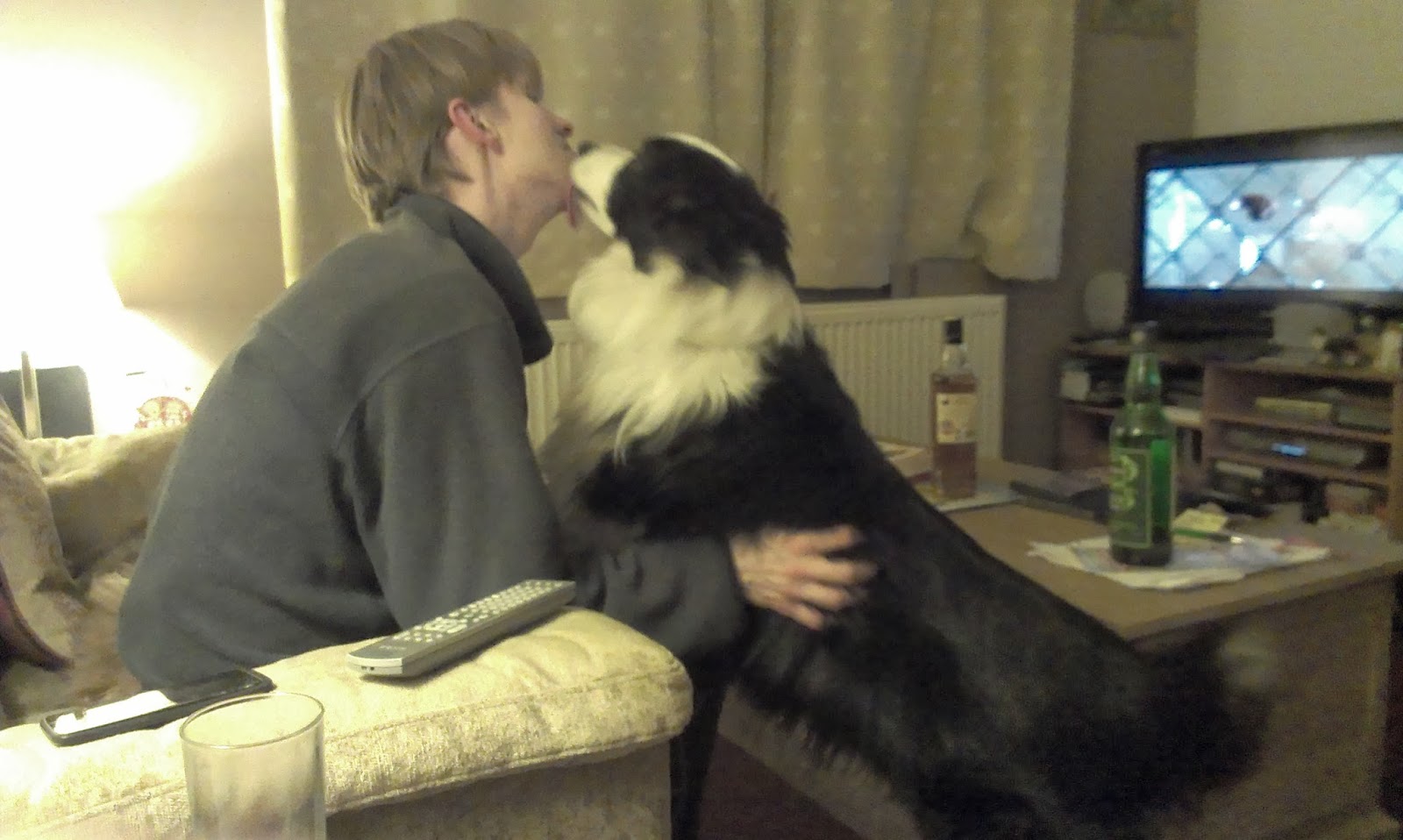 Naughty Brodie is good at pinching his bed though-poor Bailey! 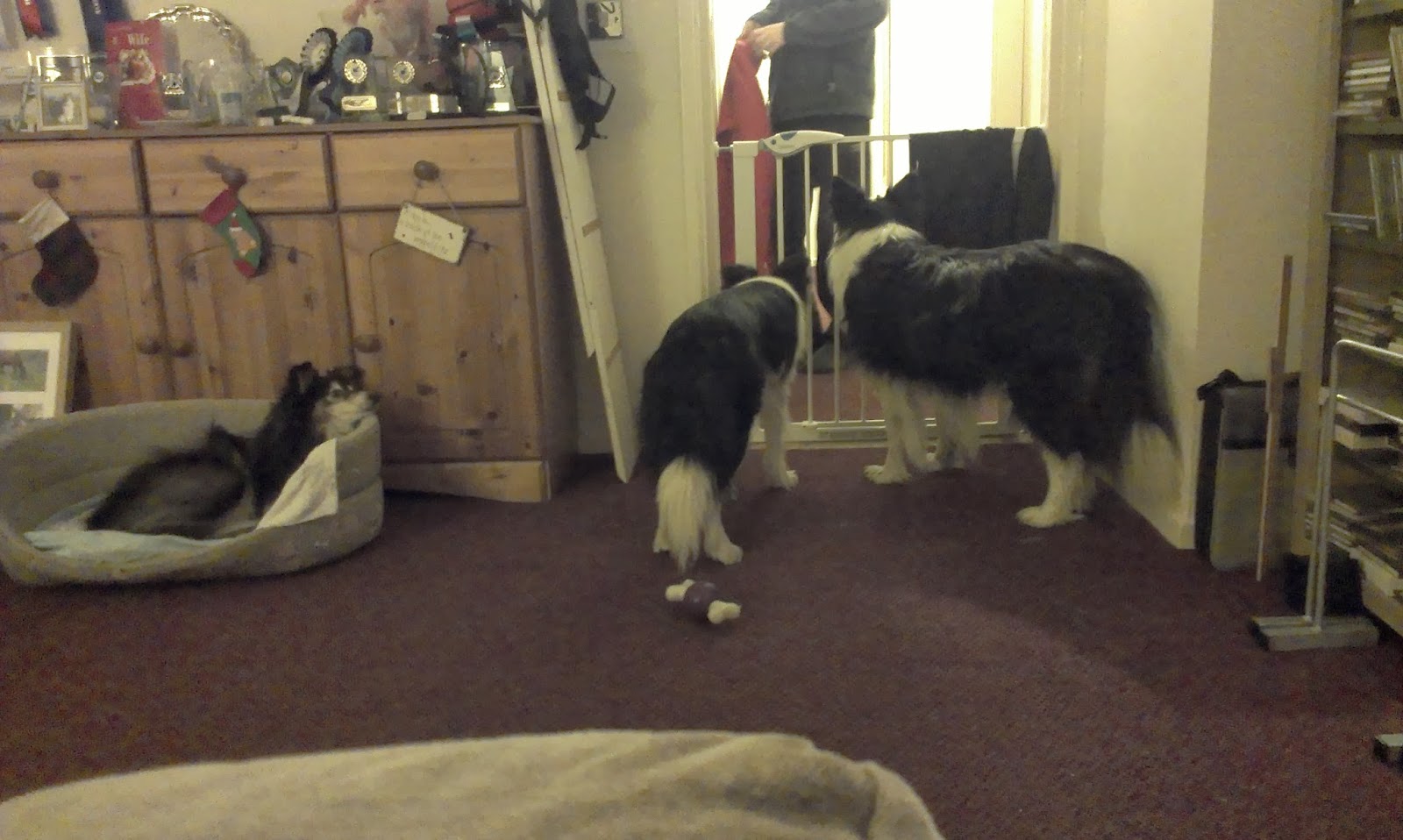 Bailey last stayed when Sparkle was quite little-she is trying really hard to endear herself to him but its not working really... 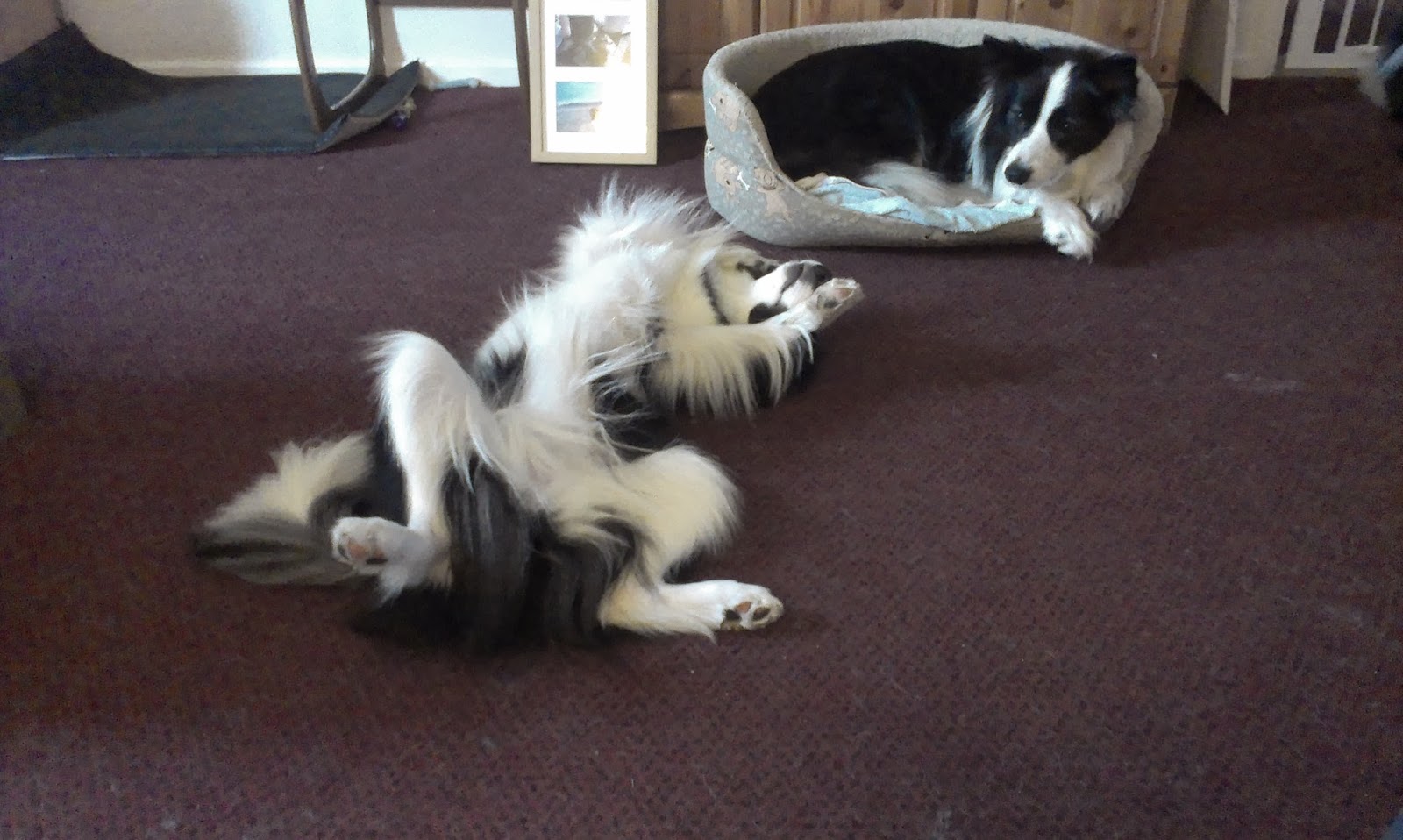 Bailey is cage ball mad, just like Brooke and Sparkle-I had to find extras for playing in the field today. Then Brax decided she wanted one too, jealous little miss! 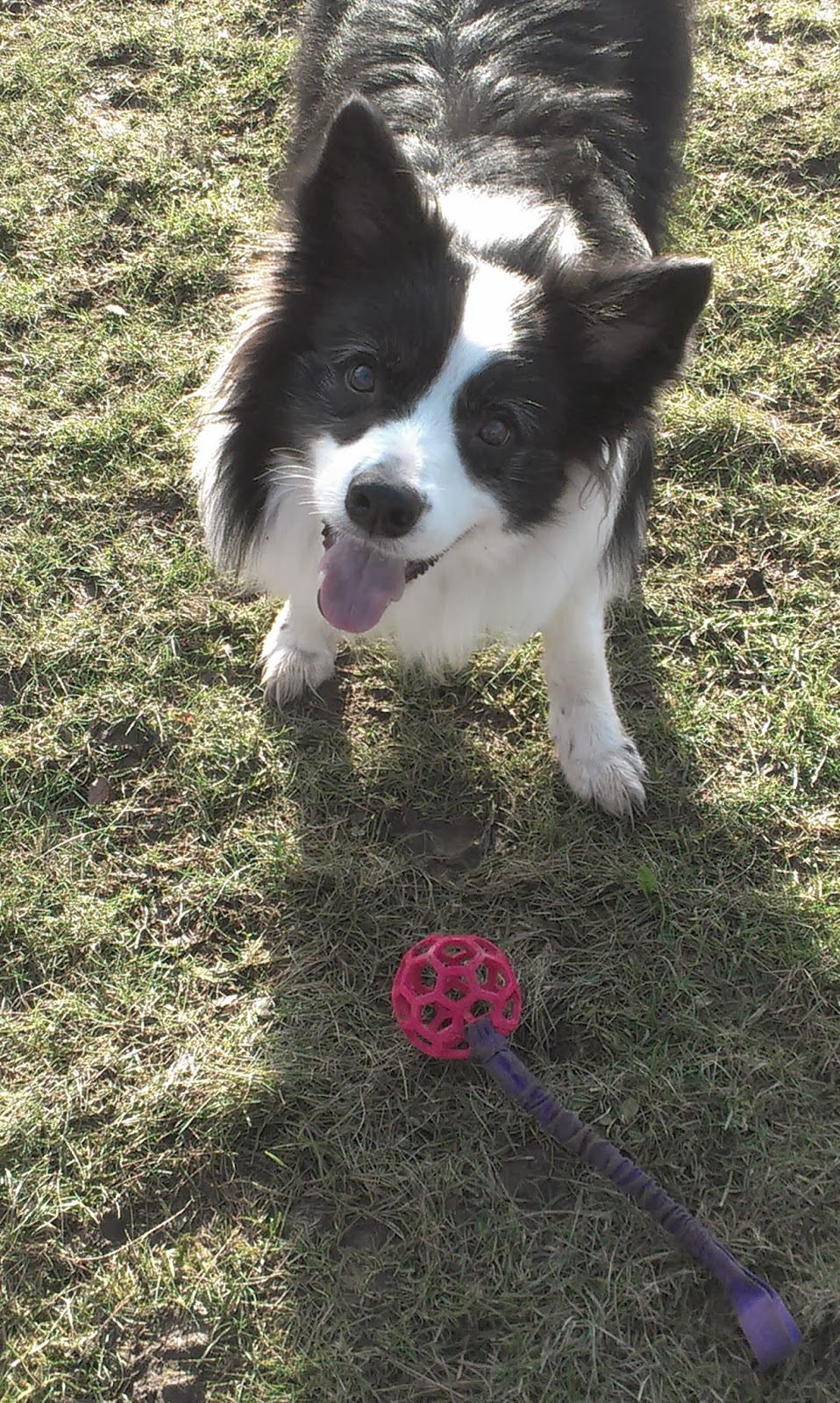 General milling around but look-its SUNNY!! 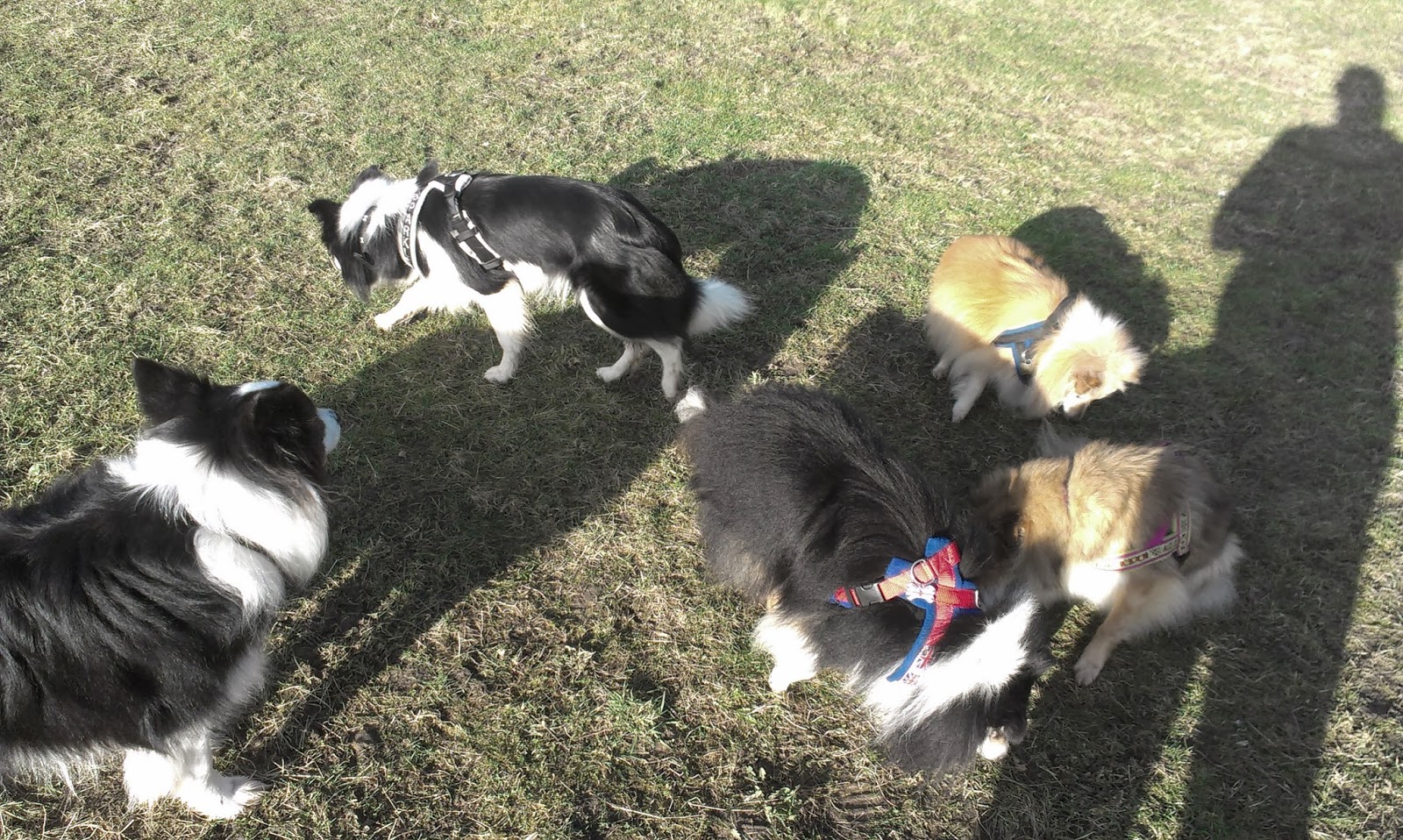 I haven't posted much on her about the horses recently, mainly becasue I have been making some hard decisions :( I have taken the heartbreaking decision to sell Max sadly. Mucking out is taking a real toll on my back this year, partly as because of the awful weather he has to be in for a long time as he breaks through the electric gate if he decides he's been out long enough! As he is very wide (being a Highland pony) he puts my back and knee out if I have been mucking out and its sore already. I feel I can't do him justice and so he is going back to his previous owner. I'm so pleased that he is going to such a great home where they will keep me updated. I'm so sad as I love him to bits and will miss him so much but I have to do whats right for both of us :( 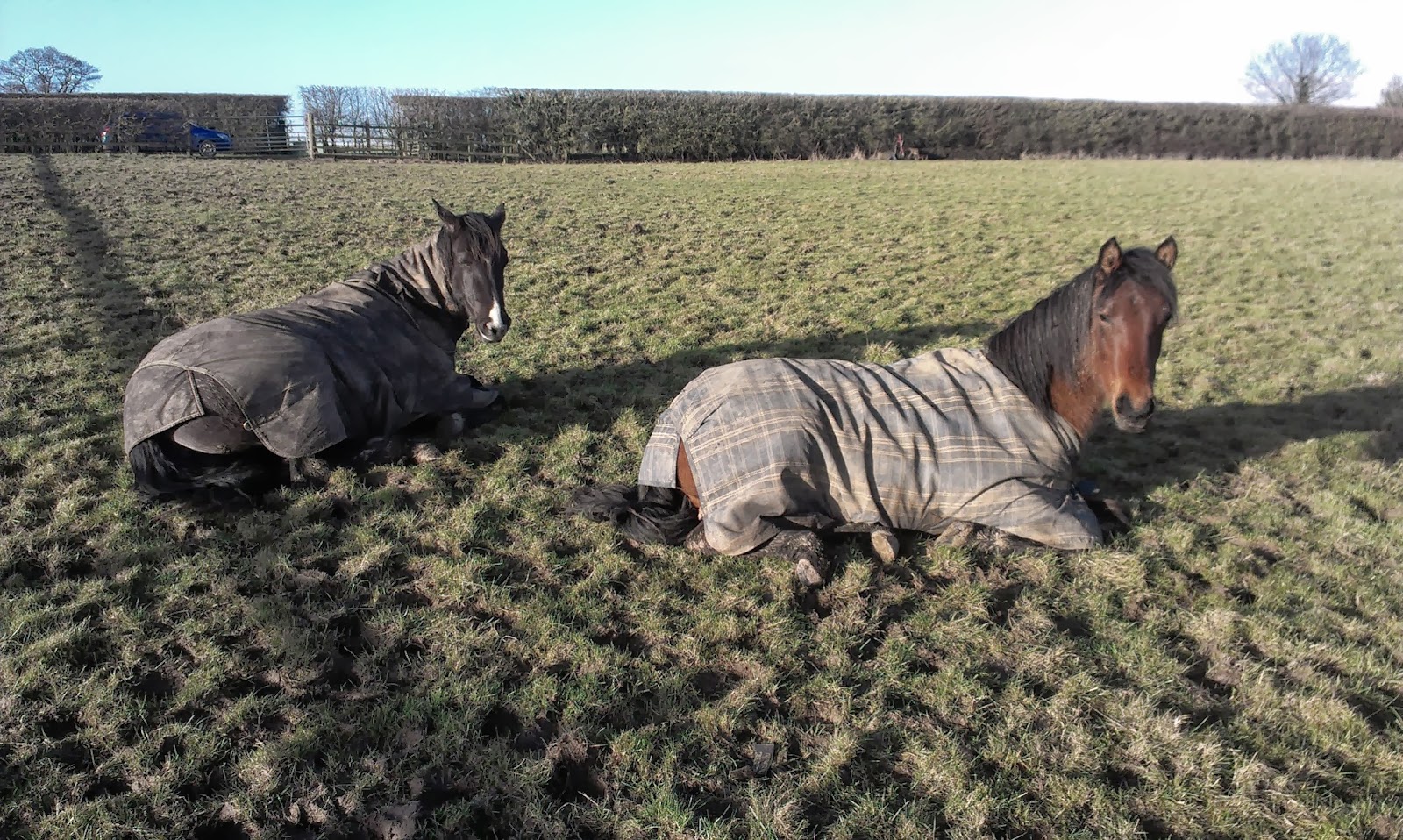 I will keep little Diva for now as I don't have the same physical stresses and time constraints looking after her. I will see how the next couple of years go but at the moment she is eating herself silly and enjoying being a baby with her pals!!
Posted by Rhoda at 19:45 1 comment:

Fun at the Dog Barn!

Our doglets had loads of fun doing some training at the dog barn at the weekend. Lian had hired it so it was great that Brooke puppy worked so well with her Grandma around! Rather than waffle on about it I will let you see how much fun we had :)

The only thing that concerned me was Brodie's apparent dislike of the dog walk-he was very unsure going in one direction only! Luckily I had booked the barn again for my class yesterday so I took Brodie too and did a lot of rewarding his dog walks and he was much better!

We have had so much rain for months now, it does make everything take twice as long! Fortunately my field was fine after a whole day of teaching yesterday but I have had to cancel classes today due to constant rain. I'm excited about next week as it involves a visit to the dog barn to train some of my competing people and their doglets! I am also very lucky in that my friend Helen (who owns Sparkles boyfriend Trek) has an indoor venue and we try and have a training session there once a week. I have taken Dolly dog as well as mine and she is coming on really well with her weaves despite not having done much training at all over winter.

Here is a little video of her-I love her floppy spaniel ears in the weaves!

The big news is that Jenni and Rommy have qualified for Crufts!! They will be taking part in the YKC Senior Jumping so we are all looking forward to cheering them on! :D Jenni and I went to Leamington so she could run him on their Crufts carpet to see how he ran. He coped really well with it and it was lovely to be inside out of the rain!

Over the next few weeks the doglets are going to be busy. Sparkle has workshops with Toni Dawkins and Natasha Wise as well as her weekly lesson with Uncle Dan. I'm dreading her coming into season as she hasn't had one yet and is bound to soon. I will hopefully take a understudy in the form of Dolly to all these agility parties instead if she does decide to have bad timing! The shelties are all doing fun ESSC related things for the next couple of weekends before the show season starts. All I can say is-roll on Spring!! :)
Posted by Rhoda at 15:36 1 comment:

Happy 7th Birthday to my special boy :) I can't believe that he is 7, he really doesn't act his age at all and totally entertains us with his goofy antics and happy sunshiny personality!! I love him to bits and am so lucky to have shared so many wonderful years with him. I couldn't have wished for a better first agility partner-his enthusiasm and desire to please are fantastic and I am thrilled that we have been on such an exciting agility journey together. At the moment he is in his favourite place-curled up on my feet :) 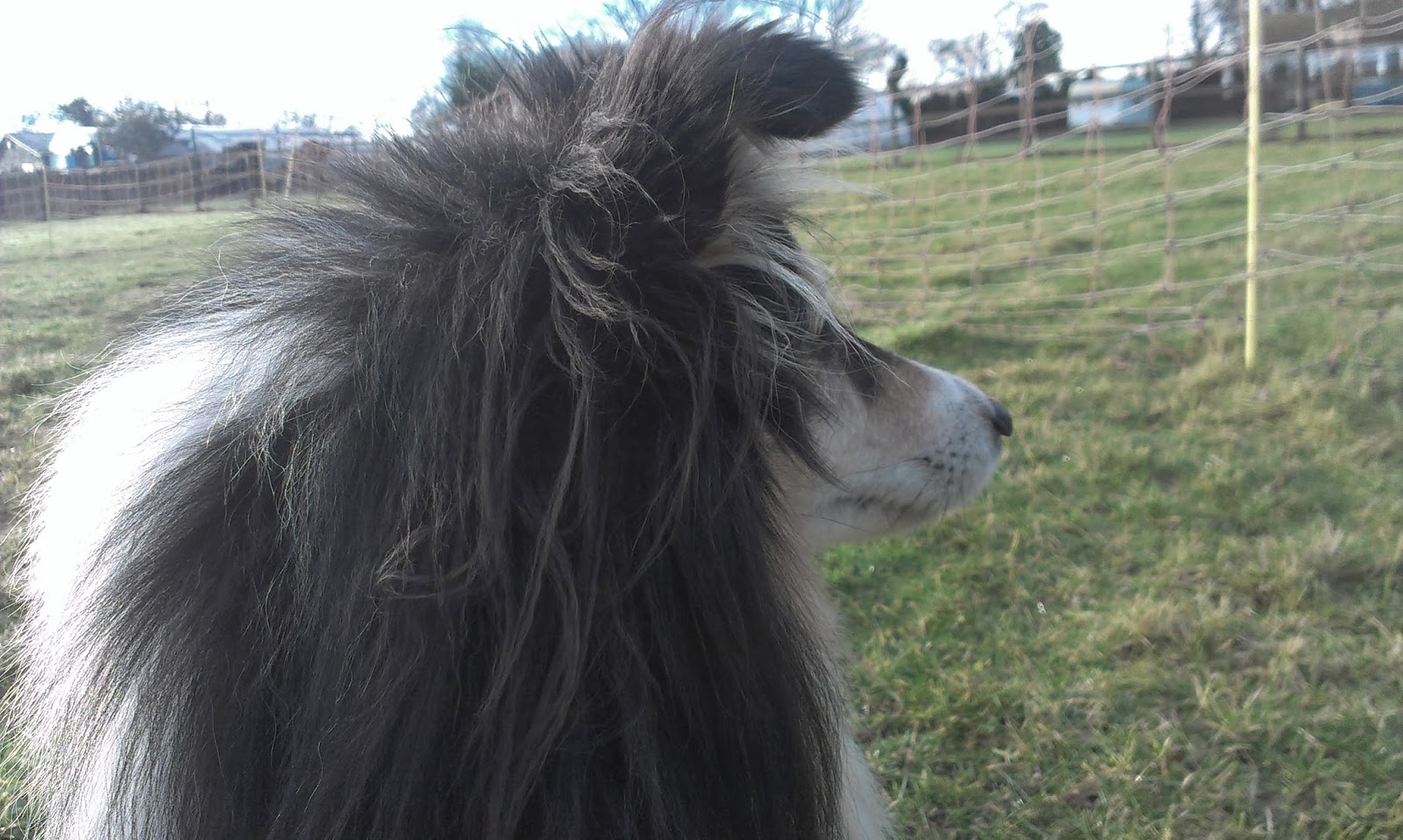 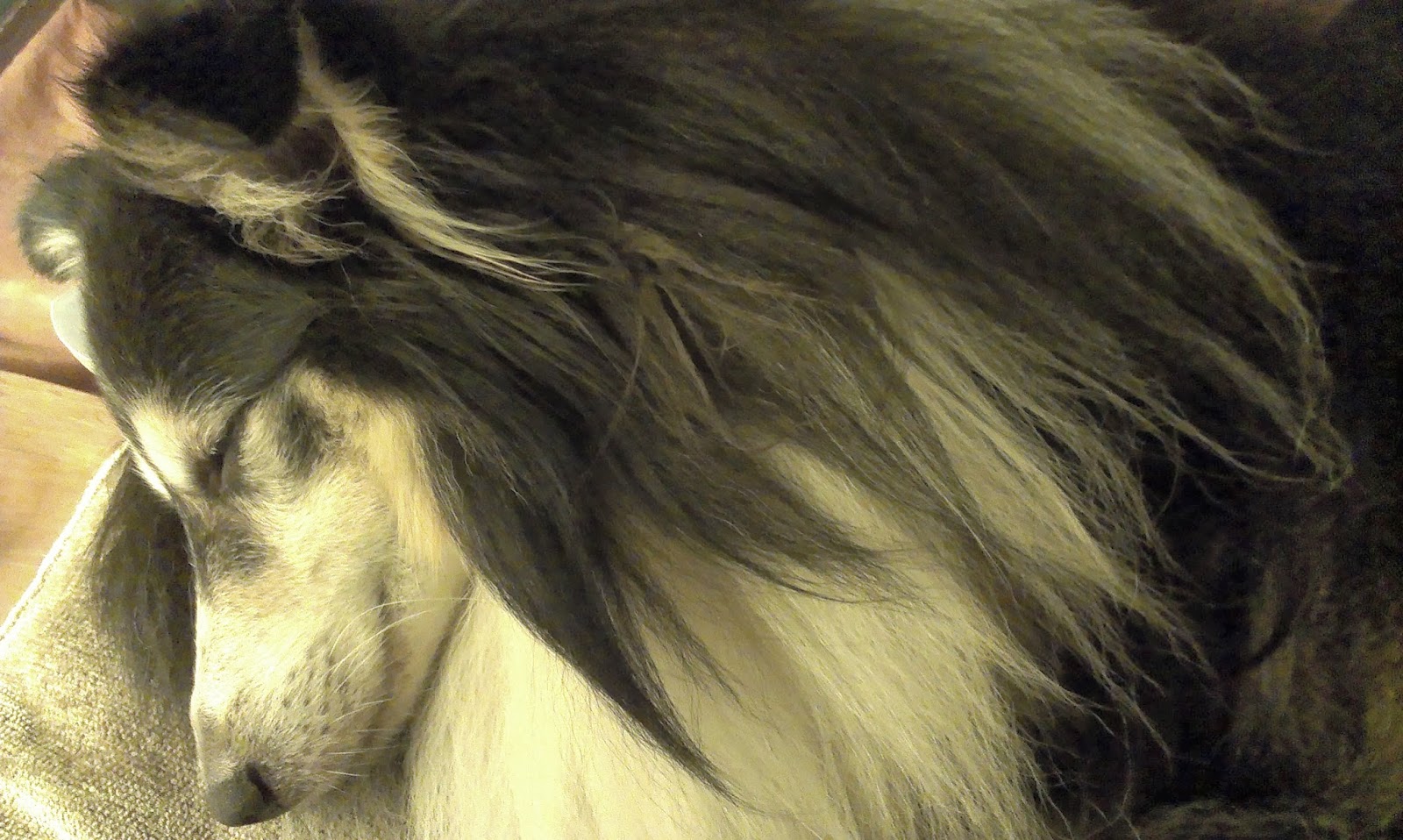 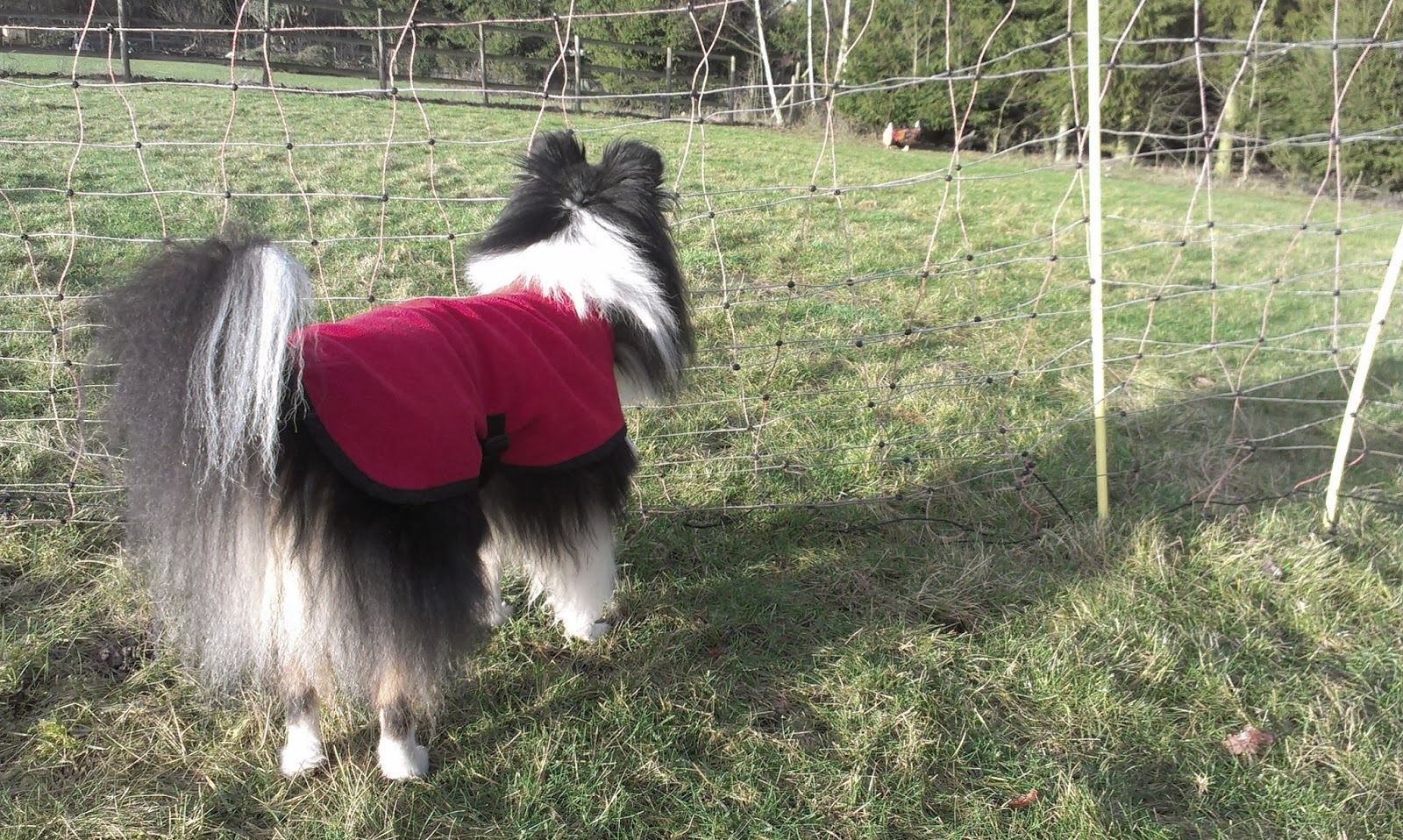 A special mention for another special doglet, Mitch the greyhound has had his metal plates removed from his leg after breaking it but unfortunately got an infection which he is doing his best to fight off. Get well soon Mitch from all of us xx

This is Brodie having a run round on his birthday! I don't normally run that badly, I pulled something in my back mucking out and am really sore today :(

I also 'ran' a little sequence with Sparkly pants. Again, my lack of movement didn't help her out much but she was a good girly. Her and Brooke had been playing chase with a cage ball for 25 mins before this so she was a bit tired. Slower Sparkle helped my timing, lol!!

Can you believe that my little Sparkly is ONE?! Where did that time go? I was looking back finding puppy pictures and she was such a cute fluffy puppy-I know I'm biased! 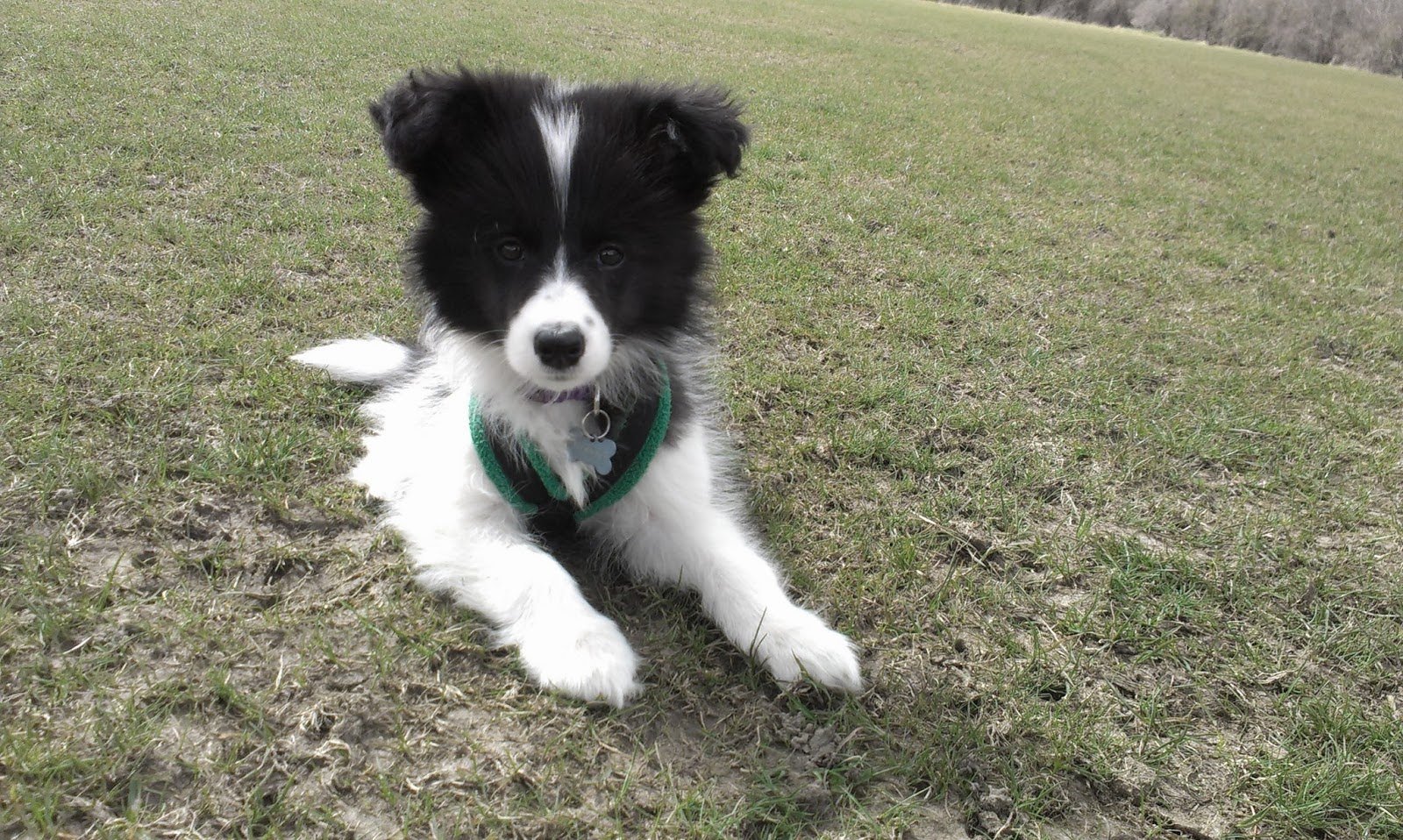 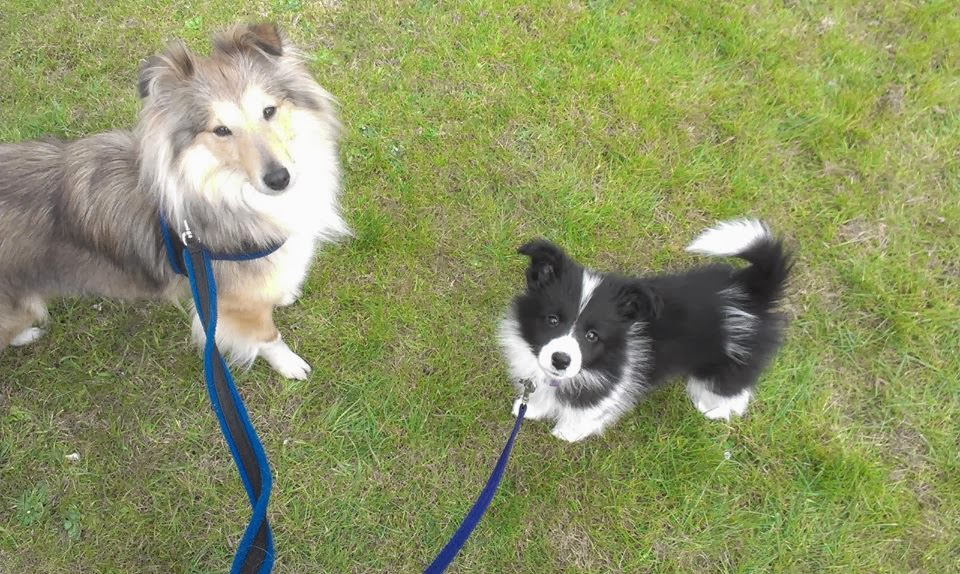 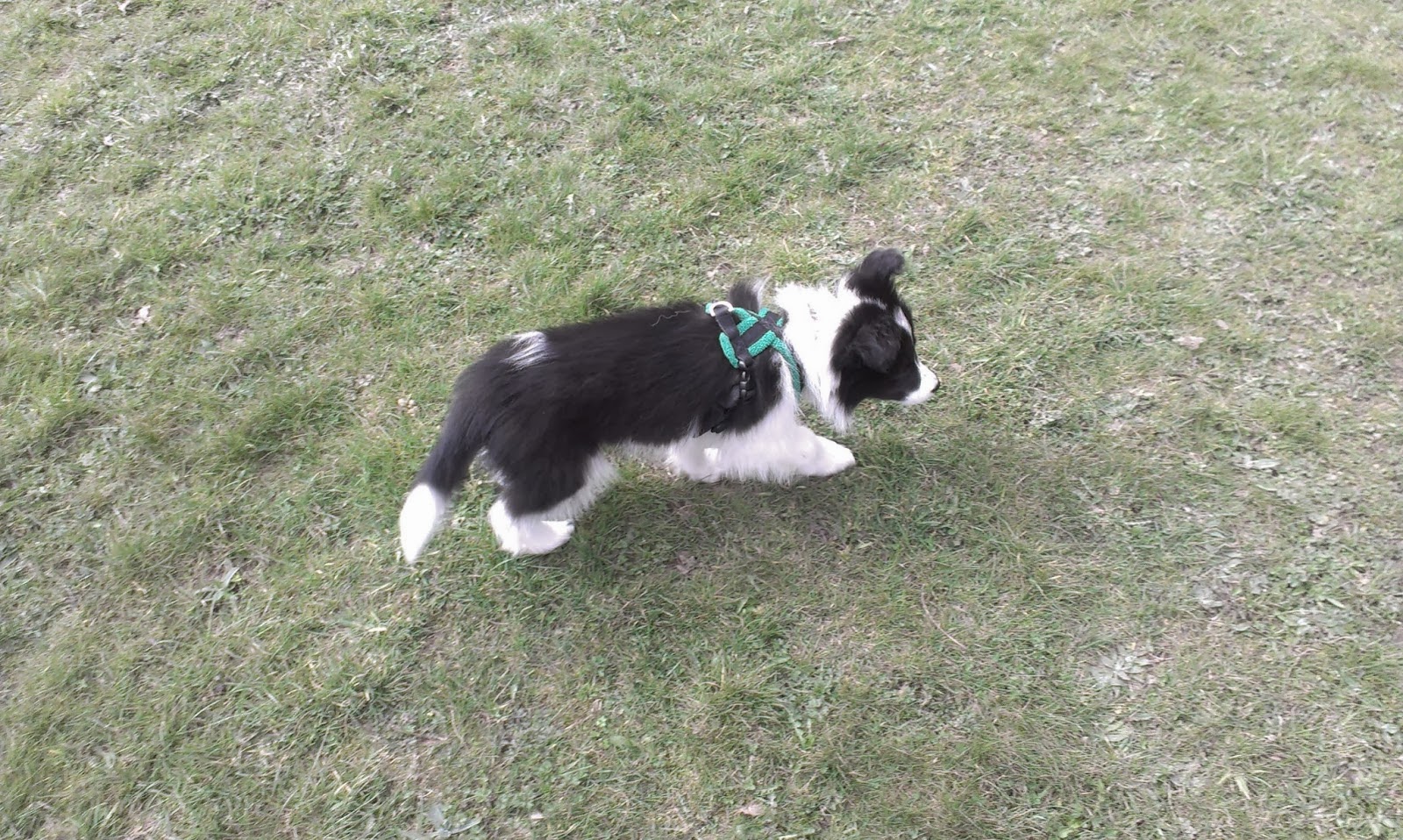 From this ickle poopy she has blossomed into this beautiful girly... 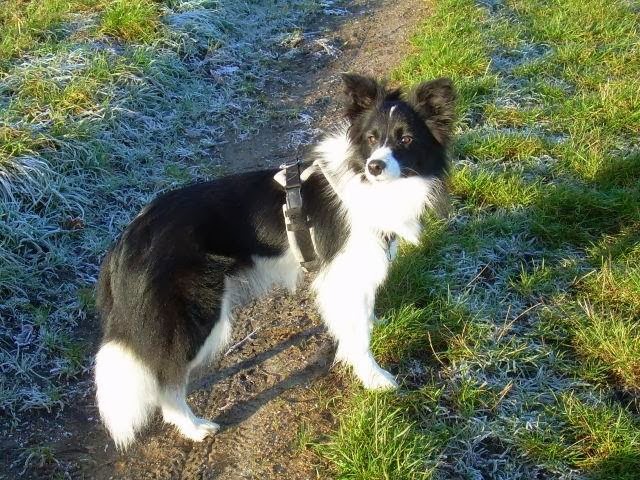 She celebrated her birthday by doing some dog walk plank work and getting soaked on a long walk! Saturday we spent a lot of time inside so she ended up getting some of her birthday treats and might have overdone it-oops :( Yesterday we went to a Dave Munnings training day and she was just not quite 'with it' I put it down to her brewing a season as Brooke has just had one but it turns out she had awful runs and her tummy is still not great this morning. Poor girly, I feel so bad that I blamed her hormones! She is totally different to Brodie though as he just won't jump if he feels bad.

All the shelties have done a bit of agility this week. Matt had a 1-1 with Dan yesterday and worked both girls so he has homework too. Brodie got to do a bit at the end of Dave's training and loved it! He is my comfy slippers :)

Next on the list is to do some more obedience practice! I have got as far as bringing the dumbell out of the car...