Brax had a very exciting saturday, going off with Matthew to compete at obedience. Yes you did read that correctly - Brax doing obedience!! The venue was the Championship breed show at Stonleigh and we had entered her in Pre-Beginners and Beginners. She has done a tiny bit before but certainly not at such a big show. In typical Brax style she got stuck into learning how to retreive her tiny dumbell and bring it back. On the day she was let down a bit in her heelwork in pre-beginners as there was lots of crumbs on the floor that were tempting! She only lost 1/2 a mark in her recall and her stays were perfect so she came 5th overall. In her beginners she did her retreive very well and did better on her heelwork and ended up 6th overall. One lady came 1st - 5th with her five shelties that compete a lot so we thought Brax had done very well!! Here she is with her rosettes. 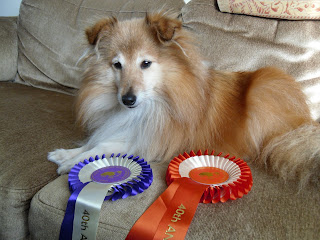 Exciting news is that my Mum is coming to visit me this week. I can't wait to see her and the shelties will be beside themselves! She lives up in Aberdeenshire and they have already had snow so I'm hoping she doesn't bring any with her! Here are a couple of pics from my Mums where I grew up. The mountain is called Bennachie and it has some lovely dog walks when its not snowy! 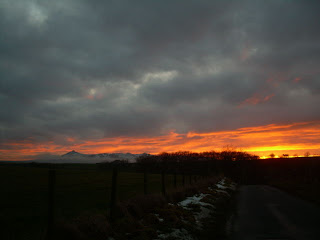 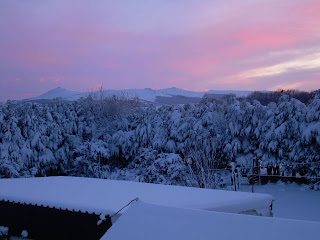 It really feels like winter is here now, digging out thick coats, loads of layers and woolly socks! Max has had his first clip of the year and I gave his tail a good brush through this morning - this is what it looked like after I had finished!! 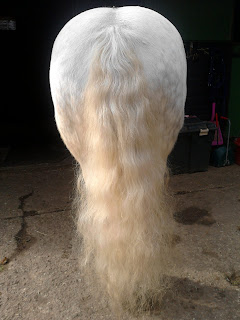 Brax has definitely been feeling the cold more recently as anyone who sits down for long enough acquires a furry lap warmer!! I was going through some photos recently and found this great one of Brodie on holiday last year - I wonder what he is thinking about?! (Click to enlarge and see the silly expression on his face!!) 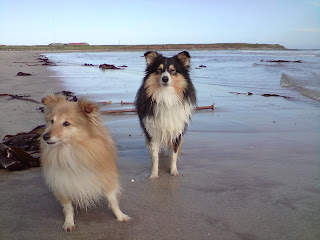 Oh and a big well done to our friend Jackie and her young spaniel George who have qualified for the Agility Club Starters Challenge 2011 - what a good year they have had!
Posted by Rhoda at 15:57 No comments:

We felt a bit lost this last weekend as it was our first non agility weekend for ages. We took the dogs for a really long walk instead which cheered them up a bit! We have been doing some fun games with them in the flat just to keep them mentally and physically ticking over. Here are a couple of videos of Brodie doing some gridwork up the hallway! In the first video he isn't very confident of his footing or particularly fast. After a couple more goes, I took another video and he is much more confident and therefore faster (unf this video wouldn't load on here - grr!). I think work like this is so good for their coordination and motivation - he thinks its great fun!


Last week Jenni brought her 9 week old sheltie puppy Rommy up to visit us at work - he is soooo cute!! He met Brodie and Brax and thought Brodie was far less scary! Rommy and Brodie are cousins as they are both grandsons of the lovely Blenmerrow Barnaby. Rommy made himself at home in Brax's bed and had a good chew on her rawhide! 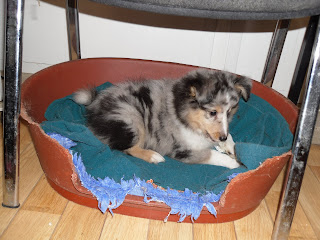 This last video is of Sykes who is an English Springer Spaniel. He is a show dog and has qualified for Crufts next year. As a younger dog he did a lot of obedience and foundation agility work in his private lessons with me, mainly to help with his coordination for showing. However, we discovered he loved the baby agility work so his owner has just started proper agility lessons now that Sykes is over a year old. This is a short video of him in his 2nd ever agility lesson - it also highlights the importance of a wait! He is an incredibly powerful, driven springer and I love the way he can already work his striding out over a line of jumps.

What an exciting weekend for two of my favourite sports - Great Britain have done so well!! The eventing team won gold and an individual silver at the world equestrian games and have got silver medals in dressage as well. Natasha Wise and the phenomenal Dizzy have done it again for British agility - MEDIUM WORLD CHAMPIONS for the second year in a row!! Her runs are on U-tube and are just amazing. Not forgetting all the other GB competitors, including Dave Munnings and Dobby who came 2nd in the large individual event!

On a more down to earth note(!), we went to a relaxed agility competition just a mile up the road at the Herts showground yesterday. Brax didn't do any runs as the grass was very long and she was in danger of disappearing under it!! Brodie only did one run in C1-7 jumping and came 2nd but we got soooo wet that we didn't stay for the agility. We were however, cheering on our friends including Megan and Hattie, Sue and Dab and one of my saturday class regulars Chester the beagle who was doing his very first show! They all did really well - Megan got numerous places and a win with Hattie qualifying her for 'Starter dog of the Year' finals next year. Paul and Chester did so well for their first show only 5 faults in each run and fabulous weaves in both classes. I think he is the fastest, most focused Beagle I have ever seen - watch out for them competing next year! :) 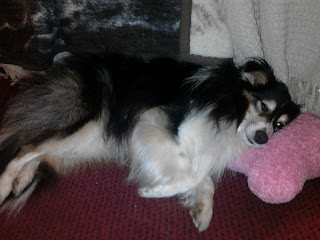 Matthew also got talked into doing the 'have a go' agility with my friend Kates terrier Dougal. He is a flyball dog so I think Matt was a bit surprised when he let Dougal go and he did most of the obstacles by himself! By the time we got home we were drenched and it took ages to dry the dogs off - Brax was sooo happy to be snuggling on the sofa for the afternoon! 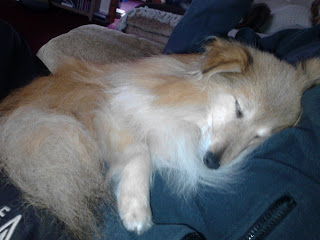