Brax gets Reserve CC at Thames!! 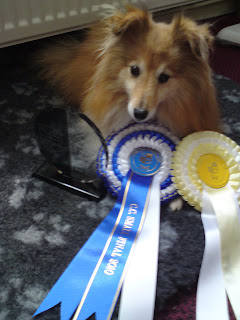 We are so proud of Bracken! We went to Thames show for just the one day this year and didn't expect to do that well as it is such a huge show. Brax surprised us in the morning by getting 3rd in a C6-7 jumping class as it was a fast course and she went wide in a couple of places. She was a bit cheeky in the agility which was the first class of the day but once she was e'd, Matthew used the opportunity to practice layering which is not Brackens strong point!

In the Champs, the courses were very interesting in that there was a good combination of straight runs and very tight turns. Not many dogs went clear and Brax got faults but managed not to get eliminated on the jumping or agility rounds. One of the trickiest bits was a straight tunnel and weaves side by side. In the agility the dog had to go from the tunnel round into the weaves but in the jumping the handler had to call the dog back after the tunnel and start the weaves from the other direction (I know I'm not explaining this very well!) Quite a few dogs got eliminated on this bit but lucky for us Brax has never been that interested in tunnels!!

Matthew was third to run in the final but there were so many good dogs in there that we didn't hold out much hope! He went clear and I don't think I breathed at all while they ran! Watching the rest was equally nerve wracking, although the tunnel into weaves bit still caught a few people out as did a straight line of jumps into a 270 left turn. Anyway, despite the quality of the dogs in the final and a few clears, the only one that went clear faster than Brax was a stunning run by Scout handled by Greg Derrett. To be fair he was 3 seconds faster but he is about twice her size!!

Ironically, when Matthew got presented with the Reserve CC, it had been written out wrong and said 'Matthew Burdett owned by Mountland Made in Heaven'. Hehe, thats about right really!

I am so very proud of Matthew and our little sheltie girlie. He has worked so hard with her to get her consistent in the ring and when he started competing her in Grade 1 a couple of years ago she was a cheeky madam! Ok, she still is but we love her to bits and she will always be our champion :)
Posted by Rhoda at 10:54