Brax has had a very busy weekend with the Interclub match on saturday (Letchworth, Wellingborough, BATS and Redgates) and we all went to Waverunners UKA on sunday. We are still recovering from the serious lack of sleep!

I didn't get to watch Bracken on saturday due to being at work :( but Matthew came home with four red rosettes from four classes!! Well done to everyone at Letchworth for your brilliant results! Brodie and I wish we could have been there.

We went to Waverunners on sunday which was being held at Newbury this year. Although it would have been possible to do five classes, we chose to do three each, especially as Brax had been so busy on saturday. Brodie did jumping, agility and snooker and Brax did two steeplechases and snooker.

I ran the jumping first and it was a flowing course with a straight run up to a tunnel to start. Unfortunately I didn't go right up with him and he missed his tunnel entry as I was already moving to get a front cross in. I was an idiot as I had forgotten my grippy trainers and wasn't running properly! Sorry Brodie!! Anyway, amazingly he got 4th in the class for fastest 5f which was a shock. He was a clever boy coming 2nd in the agility and winning his snooker class. Thanks to Matthew for helping me walk snooker as its a nightmare without a 2nd opinion! 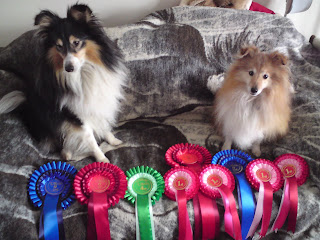 Brax was a superstar as usual and got a 2nd and a 1st in her Steeplechase classes which (finally!) moves her out of novice and into senior. We decided that snooker was not her thing as she thought that Matthews legs looked far more exciting than the cloth tunnel! Naughty girly!

Congratulations to Lian and Saturn who had a fab weekend and got placed in all his classes therefore qualifying for the Tuff e Nuff finals in July. Yay go Saturn! A special mention must go to Ruth and Jamie (who come for a lesson with me every week) who not only got their first clear round in steeplechase but they WON the class!! I'm sure its the first rosette of many. Jamie is an incredibly cute Papillon and Ruth has worked really hard to build his confidence up. He reminds me of Brodie in that if he is relaxed in the environment he will work fast and consistently whereas if something scares him, it takes a while for him to get his confidence back.

Talking of Brodie and confidence, it took ages for him to have his measuring done at UKA! He didn't like the measure as its very different from the KC hoops and he was very borderline again. It took three people a long time to decide that he was only just out of toy and into midi!
Posted by Rhoda at 18:08