We had a busy weekend away at Catton Hall for Adams show and didn't get home until Monday hence the lack of blog updates! The dogs were travelling in style in their new car crate 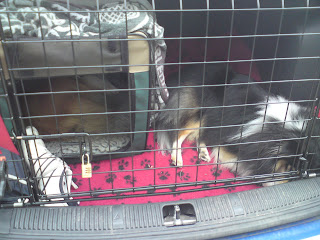 The poor dogs were definitely ready swop us for new handlers on sunday! We had a cracking graded 6-7 course which had tunnels under A frame and dog walk and required the ability to work your dog at a distance. It also included the weaves and dog walk twice each! I was so proud of Toad as he was one of the few dogs to get round all the tricky bits and he was fast and clear until I pushed him over the start instead of the finish - arrgghhhh!!! I knew there was a chance of that happening and I had meant to be on the other side of the dog walk but he surprised me by working faster than I had anticipated. I was very proud of him working so well despite me!! Brax got a jumping win on the sunday but her and Matthew really got it together on Monday winning the G7 agility and jumping and getting 3rd in the helter skelter. This is a video from my phone of her jumping win on Sunday

Brodie ran like a star in the Graded agility and won by over two seconds, I can't believe he has a second Grade 6 win already! He was going nicely in the jumping and unfortunately I just dropped my arm on a 90 degree turn and he did what he was supposed to and came in to me. It was my fault for trying to front cross before the weaves whereas I should trust that I can rear cross on the weaves (which he did perfectly after he'd been eliminated). He ran well in the helter skelter and was clear but just out of the placings.
There wasn't any videos of Brodie doing agility but I thought I'd video one of his little habits that makes me laugh! He has this funny quirk about rubbing like a cat on the feed bins at work - it always concerns me that he likes the Bakers one best!!