We went to K9 Sports UKA at the weekend and had a really mixed bag of runs! Brodie was a clever boy on Saturday getting 3rd in Champ jumping and 2nd (unplaced) in champ agility. I was really pleased with his dog walk as I have been practicing loads of stops and this was a perfect course for a running dog walk and he did it well :)

Here is his champ agility run - thanks to Colin for filming it!

Dolly was a tad WILD in the Beg steeplechase!! It was a fun course and involved eight straight tunnels, she did about two and then her brain exploded and she had a fit of the zoomies. I laughed at her all the way round which probably made her worse but we had fun!! She did a good run in the jumping but missed her weave entry. Her agility run was lovely and she would have been 3rd (held contacts) but they placed to 2nd. Her speed totally threw me over the weekend, she was so much faster and more confident which is great but I need to speed up my handling!! Thats the great thing about agility, you and your dog are always evolving as a partnership and learning new things about working together.

On Sunday we had all five doglets with us as Matthew came to run Brax. My two were not on form, poor Brodie took off over the first jump in the CSJ agility qualifier and pulled up lame :( I have just been to the vets and he has anti-inflam tablets and a weeks rest. She wasn't exactly sure what he has done but thinks he must have just tweaked something, poor boy. This was Brodie looking sorry for himself last night having mummy cuddles. 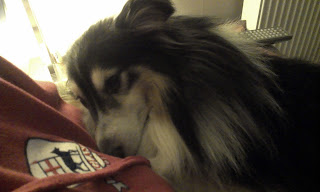 Dolly was threatening a fit of the zoomies again on Sunday! She had a minor zoom off to the scrimer in the jumping (very unlike her) and then missed the weave entry. Totally my fault as I haven't trained her for a couple of weeks so def doing some homework this week. Matthew did film my jumping but stopped after her second fault on the weaves - she did them after he stopped filming! As her speed has increased I have lost some of the tight turns so need to work on that as well. I forget she is only a baby sometimes! She had a 'moment' in agility and after coming off her contacts which she NEVER does (in fact getting her off them is hard!) she had a poo in the ring! Poor girly must have been desperate!! We had walked her round for ages and nothing so the excitement obviously got to her - oops. She did her run in pairs beautifully and got her contacts so made up for the poo incident!!

Matthew ran ickle Brax in champ agility and she went really well to the point that he wasn't fast enough to get his front crosses in! She likes her handler to be right with her so is the total opposite of Brooke who prefers a bit of space. This is Brax's first competitive run in almost a year, yes she got E'd and missed her A-frame but look how excited she is to be running again!! Spending the winter building her fitness up has worked as she managed to win Champ jumping (ok she was the only one in it) and do a cracking clear in the pairs. I looked at her time for champ jumping and despite Matt almost falling over and Brax stopping, she was only a second behind the midi and standard winners, bless her. This is her crazy agility run! :)

Because Brodie was lame, Vanessa very kindly lent me her fab poodle Tia to run in the pairs with Jenni and Rommy. Tia is amazing - almost 13 years old but still runs faster than a lot of younger dogs! They were a great pair and we both went clear! Jenni had to steer Rommy round on toy height and did really well and clever boy did his weaves to tunnel beautifully which caught a lot of dogs out. I really enjoy running different dogs as it is so good for my handling :) 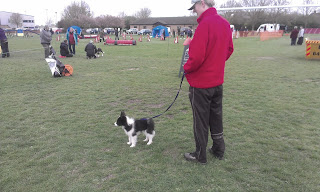 It was my little Sparklers first outing at a show and she was FAB! So confident with all the things we take for granted - the tannoy, people shouting commands at their dogs, barking and loads of people. Well in fact she was in her element - the more people the better! Thanks to everyone who came and said Hi to her, she loved meeting everyone :) This is Sparkle and Matthew watching a dog run - she was fascinated but very attentive to us for food and a toy which was great. We did some restrained recalls and she was such a good girly :)