We had a nice weekend competing at Shuttleworth. We hadn't been to this show since 2010 so thought as its not far we would go for a day out. Brodie unfortunately wasn't running but Dolly and Brooke did. Dolly had two runs in jumping (combined and graded 1-3) at the start of the day and Brooke had her two at the end of the day by which time it was raining!

I was absolutely THRILLED with the spanner!! We got a refusal on each course but I just loved running her, it was the first time that I felt that great team work feeling with her. It was like we were really on the same wavelength :) The courses weren't that straight forward - weaves to tunnel in one and tunnel to weaves in the other and a staircase of 4 jumps to two pull throughs. In the first run she went off to investigate the weave number and then did the weaves perfectly. In the second run she did all the complicated stuff including the pull throughs and tunnel to 12 weaves and I was so excited and proud of her that I dropped my arm and pulled her off a jump - what a muppet!! :) She was amazing despite me :)

Brooke was a little star as well - exactly the same thing in her first run as Dolly, she went off to look at the weave number! Other than that she did a lovely run. I took a video of it on my phone so its not good quality unfortunately. Her second course was C1-3 jumping and it was a tough one. She had a pole, got E'd and missed her weave entry (coming out of a tunnel) but she worked so well and kept her speed up despite having the pole and having to re-focus. She completed her weaves and did some really nice work and Matthew came away with the same buzz I got from my runs - we were soooo proud of the baby doglets. Just can't wait for the next show now!!

I have to say well done to the J9ers who were competing, Caroline and Bobby with champ S/C wins  at Broadlands and Paul and Chester getting their first G6 win - just three more to go!! Jenni and Rommy had an incident with the cloth tunnel where he got twisted quite badly in it :( Such a shame that they can't just get rid of them. Matthew and I have had so many issues with wee Brax over the years trying to get through wet cloth tunnels. It is not a consistent piece of equipment for each dog on the same course is what I hate about it. I remember at Rugby Champ a couple of years ago there were about 75 ish in the smalls. The first half of the class had done the jumping run with the wind blowing the tunnel open. Unfortunately Brax was towards the end of the class and it had started raining and so many small dogs got stuck trying to get through it in the rain. Brax is less than 4 kg and took a good 3 seconds in there!! Sadly a really good foreign dog had to be PTS after an injury in the cloth tunnel recently. Ok rant over now!

I took some photos of the shelties posing in the field this week. I just love the one of Brodie - he is such a handsome boy. The gingers are the better posers though! I can't get a decent photo of Sparkle so will try again today. She is just a blur in all of them!! She is now 10.5 weeks old and almost ready to be out meeting the world - I'm not sure if the world is ready for my little bundle of energy!! :D 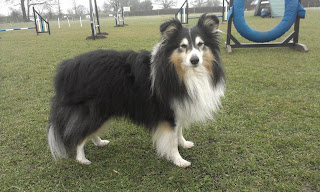 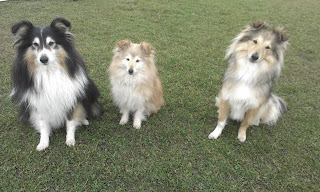 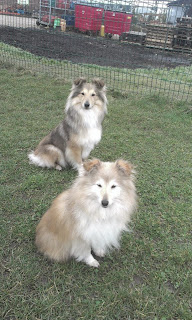