We have had such a busy weekend that I don't know where to start!! On sunday we went to the Sheltie Agility show which thankfully was inside as the weather was terrible. The dogs were soooo excited about all the other shelties being there! Many thanks must go to the working section committee, especially show sec Lian who had to endure the electronic timing not turning up (second time this has happened at sheltie show). We had a great time and Brodie did really well getting a 3rd and 4th (3-5 and 1-4) in the jumping classes and a 2nd in the agility (3-5). The icing on the cake was being awarded Best Medium Novice in show!! He won the Best Medium starter last year so I'm so pleased he is still consistent!! Brax was a good girly and won the pairs with Saturn and also got a 2nd in the 5-7 jumping and 2nd in the 6-7 jumping. After the show a few of us went out to a local pub for a meal which was a nice way to unwind and catch up! 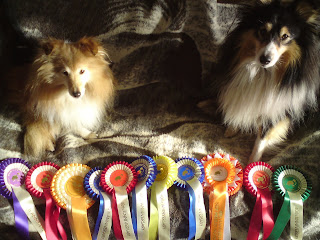 On the Monday we went to Vyne KC show and had a day of mixed emotions to say the least. It was Brackens first champ class so poor Matthew spent the morning looking very pale and like he needed a couple of strong drinks! Brax had an agility class in the morning and despite being e'd early on, he carried on to make sure she got her contacts. Her jumping class was amazing, she absolutely flew and ended up 3rd in the C6-7 jumping against some very fast dogs despite it being a fast dog course without all the turns she needs to make up time!

Brodie on the other hand was not having such a great day. His first class was the C1-7 Olympia agility and the start was jump then dog walk. Well he went off like a rocket and I still don't know what happened but he fell off the top plank. I think it was the wind probably combined with him being in mid air and he isn't a heavy dog, weighing in at just under 7kg. I put him straight back over it as he can be such a nervous boy that I wanted him to 'get back on the horse' and he seemed fine going over again. Not surprisingly he is very stiff today especially through his back so I am going to get him looked at by a physio before I run him again. His wonderful Auntie Lian has lent us a Back on Track coat which is helping his circulation -thank you!! I just hope that when he runs again that he is not nervous about the dog walk.

Anyway, Brodie being out of action for his other two classes meant that I could concentrate on Brax doing her champ class. Matthew felt better having walked the jumping (oooh it was fun getting to walk it without the stress of doing it!!) and Brax went in there and did a stonking run going clear. It rained and hailed between the jumping and agility but fortunately stayed nice for Brax's agility round. I couldn't believe it, she went clear which put her through to the final! The final wasn't held until 6.30pm by which time everyone was frozen and wanting to head home but the Brax fan club were still going strong! We couldn't believe it but again she went clear in the final and ended up 7th which was only one out of the placings! She is the smallest, naughtiest little sheltie with the biggest attitude but we think she is the best girly!! We are so proud of her to come so far, from our first agility dog who would NOT weave or do contacts to going clear in a champ class!! We love you Brax :)
These runs were caught on camera by Colin and Lian