MERRY CHRISTMAS AND HAPPY NEW YEAR!!
I have been a bad blogger as I have not been at home since Christmas day. We had a lovely but busy time over Christmas and New Year working and staying at the kennels while my boss was away. Combined with looking after horses for various people I have been chasing my tail!

Unfortunately the weather has been so awful that I haven't ridden since mid December and agility training has been impossible due to snow and heavy frosts. We did make it out to have a little play on new years day, mainly using poles on the base of the wings. I have been trying to do some pole work with Brodie using leg wraps as well to make him more aware of what his legs are doing. Here is a pic of him modelling his wraps! 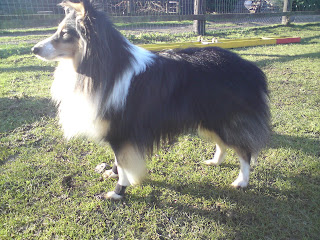 It was a good thing that they had a quick practice on Fri as their first show of the year was on saturday at Keysoe. Both dogs were superstars for Matthew and clocked up 6 clear rounds! Brax got 2 3rds in very competitive c5-7 classes and clever Brodie won his c3-4 jumping. Matthew drew a pic for me of the course and I was really pleased that Brodie had done so well as there was some quite complicated bits including the dreaded pull throughs!!

I haven't put a snow pic on the blog yet so here is one of the pups! 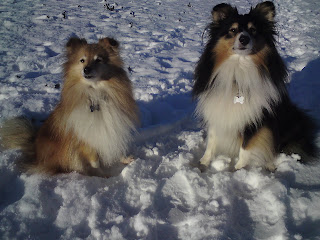