A real agility adventure this weekend! We decided very last minute to go to LAPS UKA as there was a Beginners Steeplechase and Pairs qualifier on the Saturday. Well Brooke puppy was a good girly and managed to qualify despite a fairly wild run!! No video as everything all happened at once and I only got a couple of runs on video. It was a lovely venue and despite the heat we managed to keep the dogs cool parked in the shade.

The dogs had all seen Sally the physio on Wed. Brooke had the all clear, Brax has a slightly tight bit in the middle of her back and Brodie has a little niggle in a shoulder muscle. Brodie's only run over the weekend was in pairs which was good as he went like a rocket over the toy height jumps! Brax did some NFC dog walks quite nicely and unfortunately made a mistake in the weaves and then back weaved resulting in an elimination in the pairs. Brooke did a lovely run in the Beginners agility but had a pole, see video below

On Sunday we went to Billingshurst KC show with our lot and Dolly spaniel. It was a lovely day out as Jenni and Rommy were there and we also met up with Chantal who has Savannah (Brookes sister) and Spice and Roz with Brookes niece Tula and her sheltie boys Alfie and Toby. Dolly and Brooke had three runs each. I had pulled Brodie out of his run as Sally thought a twisty G7 course would be too much for his shoulder this weekend so he had a day off to his disgust!

Dolly did well, she came out the weaves in the C1-4 Agility but the rest was lovely. She got a clear in the C1-4 jumping - her first KC clear and the timers stopped mid run!! I did it again and bless her she went clear again and ended up in 12th place out of 110 dogs :) Her confidence is growing and we are getting it together more in the ring. Her last run of the day was a disaster as my poo bags flew out of my pocket and put her off and she had brain ache by then!!

Here is her jumping run 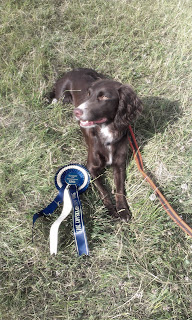 And this is Dolly's agility run

Little Brooke had a bit of a wild day yesterday! Matthew and I were talking about it and we think she threw his timing a bit as she is now speeding up in the ring. She did some really lovely bits though and she really doesn't seem bothered by the heat, crazy puppy! We love that wild little Bean!! :)

This was Brooke last night after her busy weekend! 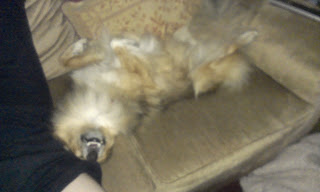 Sparkle cooling off in the paddling pool this morning - she loves it, maybe its her flyball parentage?! 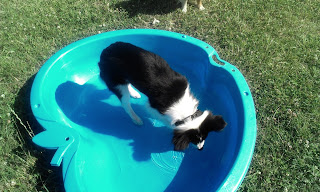