We took our three to the ESSC champ show at the weekend where the Working section run obedience alongside the breed showing. We entered Brooke into Pre-Beginners, Brodie into Beginners and Brax into both. In pre-beg, the dog has to do a set pattern of heelwork on and off lead (that the steward tells you as you go along so unlike dressage you can't learn it in advance!), wait and recall to your front and then move into the 'finish' position, 1 min sit stay and 2 min down stay. Beginners is exactly the same except they also have to do a retrieve.

Brooke won pre-Beg with some amazing 'flicky' heelwork! She had tied with Bracken going into the stays but Brax thought the floor was tooooo cold for a down stay and broke it so ended up 5th. In the Beginners, Brodie was 4th and Brax was 3rd (I haven't heard the end of it!!) so clever shelties all round. Considering most of the people competing are regular obedience competitors we are really pleased! We don't make a point of training them purposely for obedience (apart for the annual sheltie obedience training day) so they cope well with it! To be honest, I like them to do it occasionally as its great ring training for agility and they have to remain focused for a long time through the exercises. Even getting a stay in a ring full of other dogs is great agility training :) 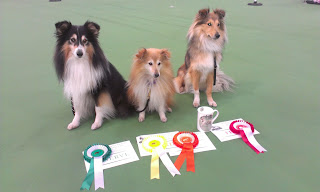 During the show, a lot of people asked us how old Brax is and were all surprised when I said only seven. Some people said that their smaller shelties had prematurely greyed in the face when middle aged which was interesting. Maybe its something to do with being so tiny? Matthew had a very interesting conversation with someone about other signs of Brax ageing (reluctance to walk in rain, seeking out heat, hair loss, weight gain)   and they suggested it might be a thyroid problem :(

We went to the vets this afternoon and she has had a blood test so keep your fingers crossed for wee Brax.