Well when the vet said that Brax would be back to full power and will be like a different dog I didn't think we would see the changes so quickly! Since she has been on her tablets she hasn't shivered (despite the cold weather), she has been striding out in front on walks, playing with the others and 'killing' her toys constantly! I ran her round at the field and she was back to her pocket rocket speed - yay!! :)

Brax hasn't done any 'proper' training for a while but she is going to be coming back into work and helping a couple of people learn more about handling. She is a great 'schoolmaster' as unless you give her the right commands she will not get it right. Brodie bless him will guess if he is unsure of someones handling whereas Brax just stops and barks!! If she was a horse you would say she is not very 'honest'! 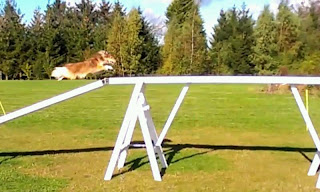 Brooke has had the all clear from the physio today and is allowed to do agility again as long as she has the appropriate warm up routine and wears splint boots. Sally (physio) thinks that as she is so fast and has such long pasterns and delicate legs that she shouldn't jump without carpal wraps/splint boots on as she risks tweaking an important ligament if she lands awkwardly as she has a carpal deviation (knocky knees!). Sally has made her a pair of wraps that look very smart.  The above photo is a still from a video on my phone from a couple of months ago - as you can see Brooke isn't slow about anything she does!!

I am a very proud trainer this week as one of my clients went to her first show with her super Lab Bailey. He is a very clever but quite anxious dog and tends to run on his adrenaline. Bailey can be reactive with high energy dogs but his Mum has done so much work with him and he will now focus on her when close to other  dogs. I was going to a UKA show and suggested that she should enter as he could do Nursery and Beginners Steeplechase and if he was too worried about the other dogs then he could just get used to the atmosphere. It was a perfect show as it was only three rings and well spaced out. I had Dolly and Brodie with me and they were both little stars - Brodie WON champ agility and Dolly spaniel got weaves in the ring which was my goal - super doglets!! Anyway Bailey was very good in his Nursery and got his contacts and more importantly focused on his Mum. She put him in Beg Steeplechase not nfc and he only went and came 3rd out of 12 dogs!! Pretty good considering he was the only non collie! If you want to see the video of Bailey then look at his blog. I suggested to his Mum not to do a wait as there was a man with a very excited dog right behind them and I thought it might make Bailey break his wait. It lost them a second or so but once he gets into his stride he looks great - not many Labs can bounce those distances either so gridwork paying off :)