My boys did me so proud this weekend!! Brodie had his turn on saturday as we went to a UKA show at Prested Hall. We did three runs and I swear he got faster the more he did! I've been careful with only doing two runs at our two shows so far this year but thought I'd try three. Agility was up first and he ran very enthusiastically and I didn't get there in time for a push out but contacts and tricky weave entry were all solid so v pleased - great dog, shame about the handler!! Power and speed was next and he ran his little socks off winning the speed section by 5 seconds. The last two jumps were through a box and had to be layered as you couldn't squeeze through the gap. I just told him go and kept my arm out and he was great :)  I tried to get Brodie to pose with his rozzie but was too busy chewing his rawhide!! Steeplechase was last and again, little man was so fast that I didn't quite get there and we got a refusal but so pleased as up the last line of jumps he was taking one stride where he would have taken two. His confidence in jumping midi height is so obvious. We have a KC show coming up so it will be interesting to see how he does over the higher jumps. 5cms is quite a lot extra to jump when you aren't very big!! 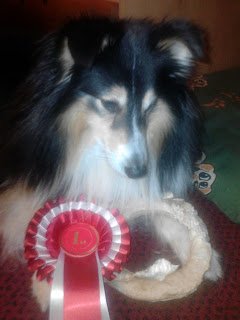 I have to say well done to Heidi and Jenson (JR) who had two nearly brilliant runs. Only his third show but clever boy got his weaves in every class :) Unfortunately his jumping run was spoilt by someone playing with a squeaky ball right behind the scrimer so Jenson did a detour. Almost clear in the steepechase as well so getting closer to that clear every time - keep up the good work! I have to also say well done to Jane and Robbie dog who did the double at Wallingford and won his agility and jumping. He also won agility last weekend so is going grade 4 in style - sheltie power!!

Anyone just interested in dogs I suggest you stop reading now... 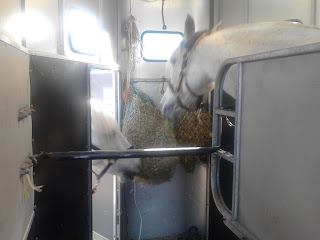 Anyway, onto dressage! On sunday Maxi pony and I hitched a lift with my instructor Kate and her gorgeous andalusian mare Speedi (also Max's girlfirend!) to do a dressage test. My first time in about 4 years doing dressage and I was soooo nervous compared to agility. It was worse than doing a champ final!! This is Max and Speedi sharing hay with Max sticking his head through the jockey door of the trailer! 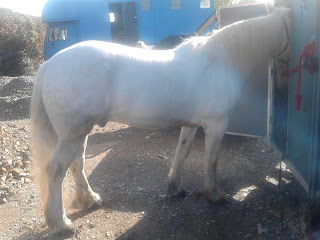 The problem with doing horse competitions is the amount of time to get ready! Lots of cleaning and scrubbing (especially with a grey!) whereas with the dogs you throw on dog clothes and pop the dogs in the car and you're off... 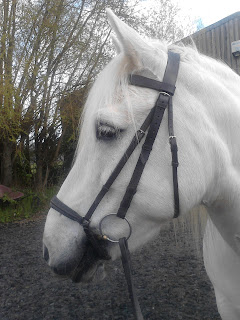 Anyway, suitably smart and dressage test remembered off we went... and WON!! Can't believe it as didn't expect it at all and really enjoyed riding my test. Kate took a video and I'm smiling trotting round and didn't need oxygen at the end!! What a clever pony - love him!! The professional photographer took lots of pics so when they are online I may have to by one or two :)

To be honest, the best thing was that five of us from our yard went and we all had such a fun, relaxing time. Horses enjoyed it too and it was a gorgeous sunny morning. All five of us managed to go home with a rosette so well done to Kate and Speedi (who also won their class), Heidi and Slipi, Claire and Finn and Hazel and Bridie. The photo below was kindly taken by Kate and is L-R Claire, Hazel and me. If you click on it, it comes up bigger. 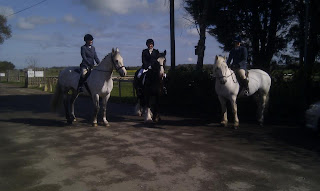