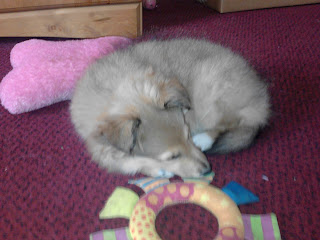 As I type Brooke is busy chewing up a toilet roll to get the treat out :) She is such a fun puppy, really inquisitive and quick to learn. In the last couple of days she has been
- carried round the common and sat on a bench to watch cricket
- been passed round everyone in the gallery at agility training
- met the horses and loads of people at the yard where I keep Max
- been for several rides in the car
- been to visit the staff at the kennels and watch me train (while someone held her)
- said hello to children coming out of school

As well as all the socialising we have been getting her used to settling herself in her crate when she is tired. She likes going in there when she is getting sleepy and will scratch at the door to go in if the door is shut - how cute!! :) So far she is being really good at her toileting outside (I don't want to speak too soon!)

We have also been playing loads with her - she is a tug monster and will hang off anything, 'killing' it and doing little growls. To begin with she would only tug inside and outside our house but as she gets used to new places she is starting to tug in new situations as well. We have been doing fun stuff with the clicker and she is pretty reliable at sit, down, come and paw in any situation. We have been playing with roll and spin which she likes doing. All credit to Lian who did such a great job preparing her for the big wide world as Brooke takes everything in her stride. She is utterly adorable!

Yesterday we gave her one of the dog games toys with some food in, she worked it out almost straight away! 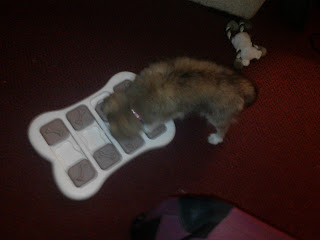