We are back after spending a week in Somerset. We had a fantastic time doing a lot of walking, eating out and drinking cider! :) It was probably the best place to be in the country weather wise as although we had some beautiful frosts, we escaped the snow! 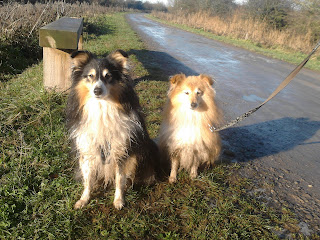 We visited Bath and Cheddar during our holiday and the dogs really enjoyed going down the caves in Cheddar. It was nice to go to a place where the dogs could go into all the pubs and attractions. They are very good at lying under tables in pubs! We did some spectacular walks including one with the thickest frost I've ever seen. 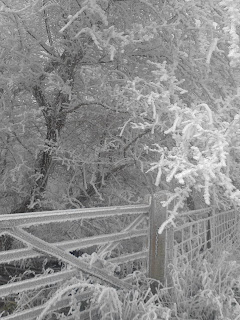 We went for a walk round Bath and although we didn't see much from the hill, it was very atmospheric! Here is a pic of Matt and the small ginger one by Sham castle (so called as it is just a wall, not an actual castle!) 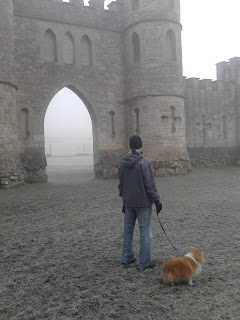 Here are a couple of pics from our walk round Cheddar gorge. If you look closely, you can see a couple of Exmoor ponies grazing. 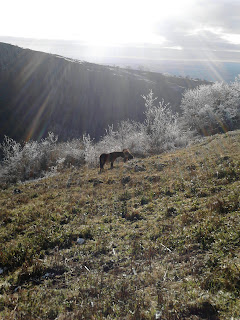 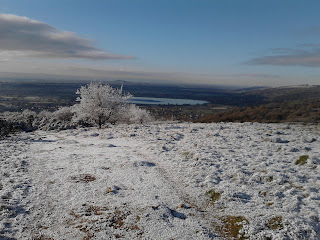 We were meant to be doing agility last weekend but it was cancelled because so many competitors couldn't get there because of the heavy snow. We had decided to try out for the England squad for the World Agility Open Champs that are being held next year in May. The heights suit our two shelties well, particularly Brax who will actually be at the top of her height catergory for a change!! Brodie and I entered to gain some experience of doing some more technical courses and to stop me getting ring rusty! The event has been postponed to Jan which means I can't go :( but hopefully Matthew and Brax will still have a try.
Posted by Rhoda at 13:53