I can't believe that it has rained so much over the last week, as a result Max pony is now stabled at night and I have been washing muddy clothes like crazy! Fortunately now we have an artificial grass arena at work to train on I don't get muddy paws on me at work :) We are starting to get lots of people hiring the arena for winter training and Crufts practice - it is fabulous and in all this crap weather it hasn't been waterlogged at all, not even the hint of a puddle!! 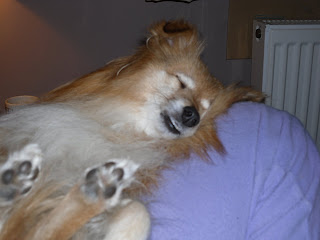 I had a run round with Brodie earlier in the week and worked on tricky weave entries and going round the back of jumps, next on the list is practising tunnels under contacts in case we get brave enough to enter any champ classes next year! With Brax we have been working hard on gridwork as she is not that confident of her striding and will always pop in an extra stride if shes not sure. Here are a couple of videos of her doing rainy day gridwork - the first one is her first attempt and she squeezes in an extra stride and the second video is her being braver on her second attempt!