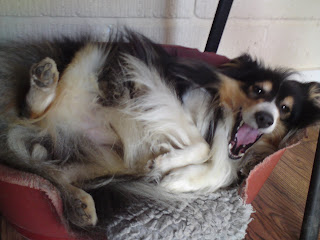 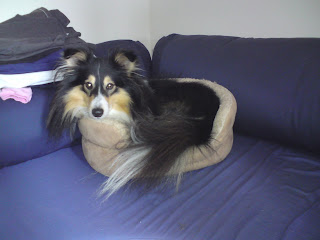 Brodie also had fun at Dog Vegas but didn't get any placings as despite being told by my physio NOT to ride or do agility, I did two runs on Sunday and have been suffering since. I just couldn't get to where I needed to be quickly enough and got poor Brodie eliminated for back jumping. I took the opportunity to practice some movements that we haven't been brave enough to try while out competing. In the jumping, the tunnel was in front of three jumps so I tried layering it by standing in the middle and shouting 'OUT' and hoping for the best!! I'm so proud of my little boy as he did it!! I took a couple of pics of Brodie this week being lazy and the one of him yawning is hilarious and the other one is him in Brackens 'cat' bed.
Posted by Rhoda at 15:08