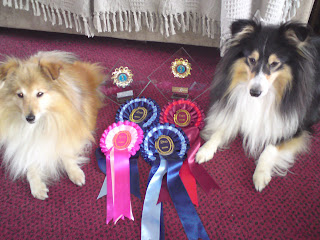 Brax had a very up and down weekend at Burnham Agility show-literally! The 'ups' included a 2nd in the C4-7 jumping (again just tenths of a second off another G6 win) and a 2nd with Andrew and his small very speedy poodle Ollie in the pairs. The downs came on Sunday as she flew off the see-saw in her agility class without tipping it at all - idiot dog should have had a parachute!! Amazingly she seemed fine afterwards but didn't go clear in her next two classes so she'll be taking it easy this week.

Brodie was a good boy and despite being lumbered with his mum as a handler we managed to win the C1-7 snooker class. I think I needed oxgen after I'd finished!! I was so proud of Brodie though as he had never seen the wishing well and just flew over it three times. I was also really pleased that we were 7th in C1-7 agility (placed to 6th!) out of 57 dogs behind some very fast dogs. Well done to Lisa with Tyler who got 4th in the agility and with her young collie Dillon who won his jumping class!!
Posted by Rhoda at 18:49