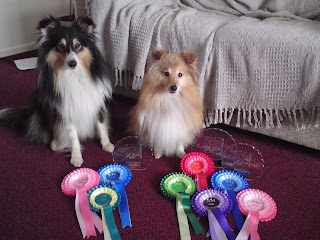 We were at JDA show at the weekend and not being too biased as JDA is our club but I think its the nicest show I've been to all year! It was a lovely showground that fortunately drained well on saturday after the rain. It was a big show without feeling too big and losing a friendly feel. Well done James and Dave and all the other team members who made is such a success. Also big thanks to Matthew and Lisa who spend all weekend in the secretarys tent sorting the paperwork and still managed some cracking runs with their dogs!

Brax did well on the saturday with a 5th in C4-7 jumping, 4th in C3-5 agility and 2nd in the G3-5 agility. On the sunday she did a cracking run in the very competitive C4-7 jumping and as I was ring party on that ring I got to watch. Imagine the disappointment when we found worked out that she would have to do a run off for 6th/7th place. Well, she went in there and did it faster the second time round to get 6th place! Then I was too busy to watch her C3-5 agility but clever Brax won it!! We are so proud of her as it was the last class of a long weekend.

Brodie only competed on the sunday and I admit I was quite nervous at the thought of having to tackle some 3-5 classes for the first time. At least I have been walking them with Matthew all season so I knew what to expect. Fortunately our first class was a C1-3 jumping that was straightforward and a bit of a blast. I was thrilled to come 5th as there were 47 in the class including some very fast spaniels that seemed about twice Brodies size!! We then tackled the G3-5 jumping which had a fairly tight course time and were thrilled to go clear as there seemed to be sooooo many twiddly bits!! It turns out that although there were a few clears in grade 3, only two of us were within the course time and we came 2nd - clever boy!!

Brodie's C3-5 agility was a nice but trappy course and we had done all the hard bits so I was a bit gutted when the judge freaked him out by racing up behind me while he was on the A frame to check he got the contact. He then went over the jump and onto the see-saw but fell off it whilst trying to keep one eye on the judge. He was OK after and finished the rest of the course well so we do need to practise having people running behind him. She was a nice judge and came over after his run to feed him a sweetie!

He went straight into Richard Brains G3-5 agility course (I love Richards courses as they are always quirky!) and did a very nice clear but was slow on the see-saw understandably so we were the only unplaced clear. If he'd been quarter of a second faster he would have been 4th but I can't complain as he tackled all four courses with enthusiam and to get three clears was better than expected!

I just have to say a massive well done to a couple of people after the weekend. Firstly well done to Megan and Hattie who had an amazing 7 clear rounds out of 8 runs and came away from JDA with three 3rds and a 4th. Clever Hattie!! Also Brodie says big congratulations to his lil' bro Sizzle and Lian who won a Beginners steeplechase at UKA. Its a brilliant win as Sizzle is only 16 months old and it was his first show-yay Sizz!!
Posted by Rhoda at 12:44