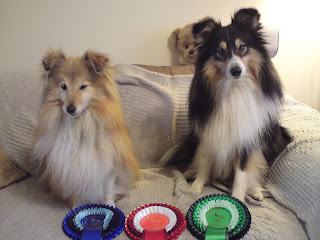 The dogs had a really cold day out at Newbury yesterday-we were FREEZING!! Fortunately we had a late start and didn't arrive until 10.30am which meant a much needed lie in - yay!! Brodie was first to run and got a fourth in the G1 jumping although he still thinks pole pickers have no right to sit in the ring! Unf I messed up his agility round by assuming the judge had given us 5 for him parachuting off the seesaw and then giving him the verbal command. Instead of saying 'left out' I just said 'out' so no wonder poor boy was confused-I need a sat nav!!

Brax was fab, she got a second in the C3-5 jumping and won the C3-4 agility over a very tricky course which included the tunnel under the Aframe and some tempting traps. She went like a rocket and got her contacts confidently which was great :-)

Matt and I are going up to Scotland for the weekend for a short break. We'll stay at my Dads just outside Edinburgh which is practically on the beach and the dogs love it. Just by coincidence there happens to be a two day show on in Perth so it'll be interesting seeing what the Scottish agility scene is like. Hopefully there will be loads of Shelties!! Brodie is doing C1-4 classes and an Olympia qualifier that is also run as a graded 1-7 agility class. Should be fun!
Posted by Rhoda at 20:55