Firstly a quick show update! We went to Adams last weekend and had the three shelties running, Brodie came 3rd in a C5-7 agility by turning the wrong way at a jump as his silly handler told him to! Brax won the same class on small height and Brooke bean got another jumping win. She was very close to having an agility win but Matt said weaves as she was in the air over a jump and she dropped like a stone and took the pole!

Dolly came too and did really well getting a 2nd in C1-3 agility with (four!) held contacts. What a good spanner! I still think its a shame that she has to win her way up in Combined classes just because I run her whereas other Grade 1 dogs can also enter combined classes. At least she is showing that she is capable! It just limits what shows she can do which is a shame. Here is her agility run!

And Mr Toad having a zoomie in the field!! Love that little monkey so much :-D 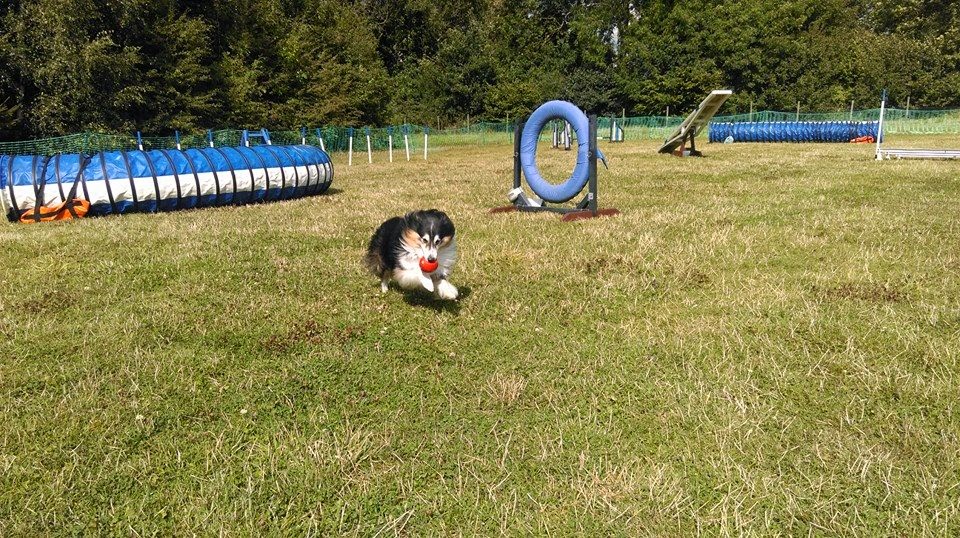 One of my lovely clients has written about me on her blog as she is doing a blogathon during August. Her website is here. She sells lovely bags, wallets and various other leather goods. She is writing a post every day about local people and things she enjoys. Its a lovely idea! Julie has a lovely rescue dog called Reacher who as a first dog has provided a few challenges but is a super lovely boy. They are coming on so well with their agility and he has blossomed from a nervous reactive dog into one that looks to his Mum for guidance. A perfect example of the saying that 'life is about the journey, not the destination'

Anyway talking to Julie got me thinking. We were saying how it would be fun for Reacher to try a little competition next year and have a goal to aim for. Like many of my clients when we first start mentioning the show word, she said she would only want to do it for fun. I wish everyone who competed in agility thought like that-how true, yes it should be fun for you and the dog. Matthew and I do it for fun and also like to be competitive but how many people are at shows and have lost the sense of fun? I certainly know/have seen a few. The whole spirit of agility should be about trust, partnership and having fun with your dog. It would do some people good to remember that and your dogs will thank you for it :-) If anyone ever sees me leave a ring without praising my dog you have permission to come over and kick me!!
Posted by Rhoda at 09:03