Warning - this post is not really about dogs until the end!!

Over the weekend I flew up to Edinburgh to see my little sister and celebrate my Dad's birthday. The weather was really kind to us and we made the most of it! Unfortunately the previous weekend I had slipped and really hurt my knee. I had acupuncture on it last week and again today but am still on restricted exercise. Its very frustrating as I can't ride for another couple of weeks or run the dogs properly :(

Anyway my visit to Edinburgh came at a good time for my knee as I had three days away from mud!! 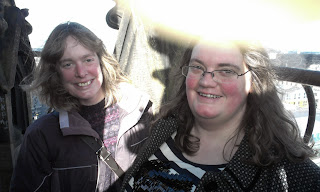 Amy and I looking a bit rosy after climbing the 287 steps in the Scott monument (below).Yes, it was slightly mad to do it with a sore knee but the views were worth it! My Dads springer Pepper keeping cosy - she'll be 14 in May! 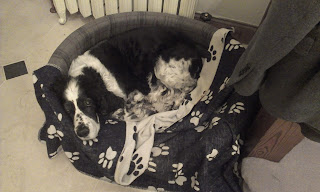 The train themed birthday cake - my Dad is a HUGE train fan! Amy made the cake and it was modelled on a real steam train. She is the artistic one!! 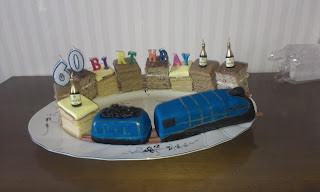 Amy in the mirror maze in Camera Obscura - well worth a visit! 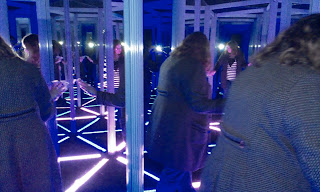 When I got back home it was nice weather and the ground had started to dry out a bit. The ponies are now getting a wee feed just to keep their condition on and Diva has a very bizarre habit! After she has finished her food, she rolls next to her food bowl, just literally drops like a stone!! Has anyone ever experienced that with their horse? Its quite comical and her breeder said she used to do it to her Mums food bowl, much to Belle's disgust!! I led Diva over a pole today and she just plodded behind me without turning a hair - her brother Rio on the other hand turned himself inside out trying to avoid the nasty pole! 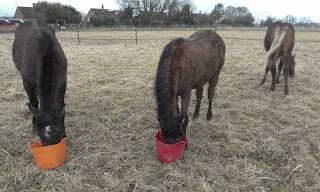 Onto the dogs! Brooke went to a training session on monday evening with Sian Illingworth. We had a bit of a disaster as Matthew got lost coming straight from work so Brooke didn't see him until her first run. She was a little superstar though and Matthew even did some very nice Ketchup turns! I wish I had video'd but in the rush I'd forgotten the camera and my phone wouldn't work in the indoor school. Its not long until our first shows so we are getting really excited now! Despite my crap knee, I 'ran' Brodie on tuesday with Jenni and Rommy to practice pairs and they both looked great. Ours are off to the physio tonight for their pre season MOT so hopefully I will have nothing bad to report next time :)