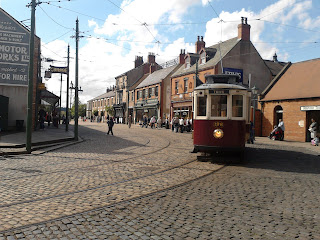 I have been very late with catching up on the blog as we were away over the weekend at Letchworth show. Anyway, back to holiday!

After staying in Scotland with my Dad we travelled down to Durham and spent a couple of days exploring the area. We really enjoyed going to the Beamish outdoor museum which allows dogs except in the buildings. Brooke saw pigs, chickens, horses, other dogs and loads of people, she also got to ride on the trams! 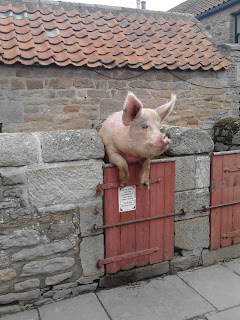 On the friday we went to Preston as we had planned to go to Wyre Agility Show on the saturday and sunday but they were very sensible and cancelled it after a huge amount of rain on the friday. We decided to go to Blackpool and explore a bit and we found a lovely big park with putting (Matthew won again!) and the dogs had a great time :)

On the sunday we did champ at Wyre in the rain. They had saved a ring for champ but the conditions were still not great - footie boots were def needed. Brodie did a clear in the jumping qualifier with a dodgy turn (I said right and he went left!) and Brax went clear despite hating the conditions! In the agility qualifier, Brax did a nice clear again and after a flying start, Brodie failed came out the middle of his weaves. Watching it in slow motion on the video I think he lost his footing a bit and didn't turn tight enough. Any, after that I handled like a numpty and got a refusal as well! Brax made it through to the final and ended up 4th, not bad as it was such a long way round on mud for such a small sheltie!!


After Wyre, we did the monday at Northern Week. It was in a massive field and had a huge exercise area which meant that little Brooke had the chance to run around after her ball like a looney! The champ agility course was good but quite challenging in that it forced you into handling in a certain way in places but both dogs ran well, despite Brax flying off the dog walk - grr! Brodie almost goes airbourne over the Aframe which worried me a bit! The qualifying rounds are on Youtube. Brax ran well in the jumping qualifier as well until racing up the last straight and running INTO the wall. I think she was chasing Matthew and missed her stride. She used to take a lot of poles until we started grid work with her but she hasn't done it for ages. Brodie did another clear run in the jumping to put us into the final. Brax also got through as so many dogs had been eliminated.

The final was probably slightly harder than the qualifying rounds which is unusual in champ as often it is more of a blast in the champs I've done. The tunnel under the Aframe caught out loads of dogs but so did the start. The push through meant that you started the serpentine behind the dog but then needed to be the other side of the dog walk. I went for the legging it and sending him out option and to be honest was just pleased to go clear. I had a hairy moment when her turned left instead of right again but managed to save it! Brax had a refusal and ended up 4th. Imagine my shock when I found out that Brodie had got the RESERVE CC!!! Steven Richardson and Libby won the ticket making her Ag Champion so lots of hugging all round! I am so proud of my little Mr Toad, going from a nervous grade 1 up to a reserve ticket, he really is my dog in a million :D :D :D His brother Sizzle had won the Reserve Ticket at Kingdom of Fife two weeks earlier - what clever boys!

He really is my dog of a lifetime and he has achieved so much considering I got him to show and do some fun agility with! Love him to bits! Here he is posing with his posh rosette and ticket 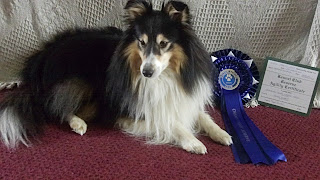 After three days of being on cloud nine we had to get organised to go to Letchworth 3 day show which is our club show so we were ring managing and helping. I think agility wise that the dogs were tired after holidays and also we stayed in a tent so none of us slept like normal except for wee Brooke! Brodie had some lovely runs on the first couple of days including getting 7th in the EO qualifier and one out of the placings in a couple of other agility runs. I know when I am helping that I don't warm the dogs up as much as normal and I think I made some silly mistakes when running. In the pairs on sunday Brodie just wouldn't run at all and kept looking at the judge. It reminded me that dogs are great levellers and have moments and we should never take consistent runs for granted! He is a quirky little dog who used to do this a lot but hasn't done it all year. Turns out that he had a sore tummy and wouldn't eat or even walk later that day - what a bad mummy :( I felt bad for making him run and should have realised but I was rushing around, poor boy. Fortunately he seems better now - he has a chicken allergy and someone had fed him treats without me checking what they were first so think those were the culprit. (No videos from Letchworth as didn't watch each other run) Here he is feeling much better on a walk this week 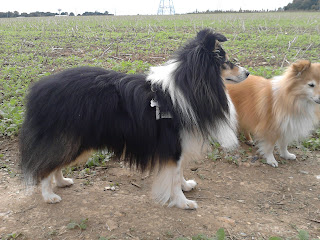 Little Brooke had great fun at the show, helping me call and meeting lots of other dogs. We bought them new beds and the fav is a big blue bone shaped bed which the two girls love. 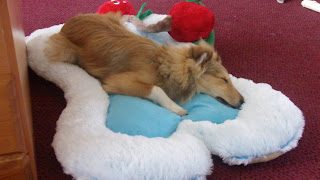 We also got Brooke's new harness through the post - big grown up girly now. Its really padded but best of all it fits - yay! I like the design as it has a loop on the back that is good for winding her up for restrained recalls. She started school this week and did really well - more of that in another post. 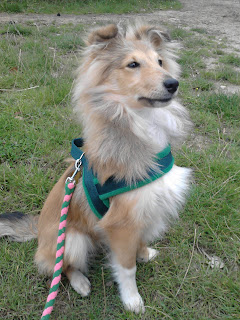