It was my idea of a perfect day yesterday! We went to agility at Burnham show in the morning (9am start) and had done all three of Brodies runs by 10.30am! We then came home and went for a lovely dog walk. We took the dogs across our village common and there was a huge 'do' on which turned out to be a celebration of our village being 900 years old. There were horse and carriages, a stage with bands playing, guess the weight of the bull and some cricket as well as all the normal village fete things!! Later in the afternoon Matthew walked the dogs while I rode Max pony and we did some serious blackberry picking!! It was lovely and warm so it was nice being outside for most of the day.

Bracken did well in her C4-7 agility and came 4th. Brodie came away with no clear rounds but mostly because he was faster than normal and it threw me a bit! Also, he missed his first contact of the season :( He was going so fast into the dog walk in the C1-7 agility that he didn't stride it right and missed the down contact. He would have come 4th if he had got it and there were some fast dogs there so I'm pleased with his new found turn of speed - I just have to control it now!! Here is Brodie curled up on Brax's 'mooey' after his busy day! 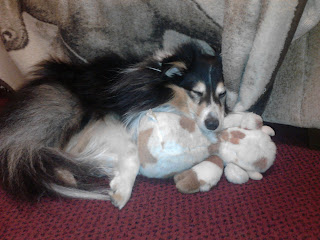