Brooke 13 weeks, oh and some agility! 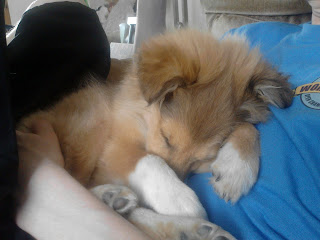 I have been a bit lax posting about agility what with our little Brooke constantly entertaining us! She is now 13 weeks old and is so much fun to play with - it amazes me how much she want to learn and she takes everything in like a lil sponge! She is soooo food motivated so we are trying to reward lots of behaviours with toys. Progress today, she had a really good tug with me right next to the school buses dropping the kids off :)
She was hilarious yesterday as we gave Brax an empty Burns bag to play with as usual and Brooke thought it was some alien life form! We did get it on video but you'll have to turn the sound down as we laugh as the way through!!

Brooke went in the bag voluntarily after Brax was finished and didn't want to come out - I think cloth tunnels will not be an issue!

Agility wise we went to Axstane and didn't last long the first day due to the weather. The runs we did are on YouTube We had a mixed weekend! Brodie only did one run on Saturday and it was the KC Olympia C1-7. We had 5 faults on the dog walk as I was an idiot and told him tunnel while he was still on the down plank. Poor dog hasn't got a hope! Looking at his time it was nice to see that he would have come 6th. Brax did a lovely run with Saturn in the Mini/Mixi pairs and they came 11th. She also ran well in the jumping, we were laughing at the video as she is the same colour orange as the equipment!!

On the Sunday we had champ and Brax got E'd in the jumping first thing as Matthew got slightly ahead of her and she ducked behind him and took the wrong jump - quirky lil girly! Brodie ran OK in the jumping apart from spotting Matthew on a turn and getting a refusal! We both did champ agility and I got E'd on obstacle 18, totally my fault, I flicked him the wrong side of a jump. Again we had a fault on the dog walk which is unlike Brodie so I'm putting it down to an increase in confidence and therefore speed. Bit of homework as no shows for few weekends.
I have to mention our lovely trainer Lisa and her sheltie Tyler who did their first Champ class and got through to the final and also came 3rd in the jumping round :) Also congratulations to Nancy and Bernadette with their OBay shelties who took the small and medium tickets with some cracking runs - I bet Zen was very proud of her kids!

Brax had a lovely run in C4-7 jumping and ended up a respectable 6th out of 90+. Brodie got a 6th in the Celebration Connection so here is a pic with their rosettes. The firsts and trophies in the pic are from JDA where we won the pairs, I just hadn't got round to a photo until now! 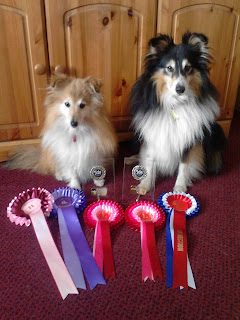 Here are a couple of pics of the dogs out in the wind! 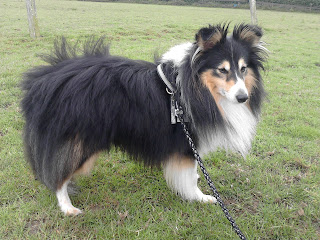 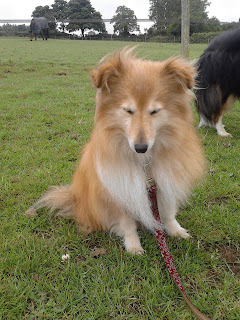