Our little princess has reached the grand age of 11 weeks already! She has had a very busy week as we have been at JDA and Hinckley agility shows. (More of that in another post) She has been very laid back about meeting new people and playing ball and tug in different situations. We have started walking her out and about now as she has had both of her jabs. I found an old harness that Brax had as a youngster as she occasionally goes silly and races around on her lead in circles and I don't want her to hurt her neck. This is her relaxing at JDA - she is sooo cute! 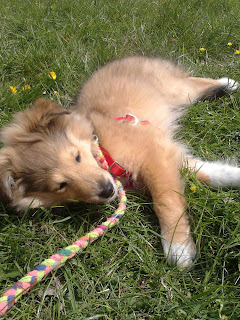 Brooke has also been off her lead lots over the fields, both with and without the older two dogs as we don't want her to be reliant on them but to listen to us instead. She loves bouncing along next to Matthew, a Daddy's girly already! After using the little red harness for a week, we decided to try Brax's old green harness on her. Its much more padded and it just about fits on the smallest settings so it has growing space. Lian gave us a pretty pink and green lead so now Brooke is very colour coordinated!! 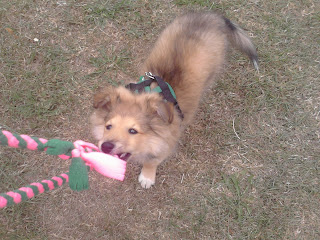 Today we went along the High Street to Sainsburys and waited outside while Matthew went shopping so Brooke could meet people. She was a bit tentative to start with as I guess she is used to meeting people in our arms but we met some lovely people who really got down to her level and spent time saying hello. She loved watching the trolleys!! 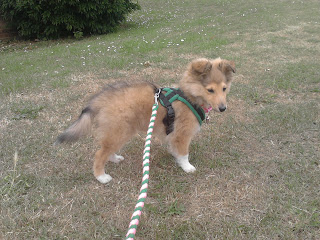 Then we went to the yard in the rain to feed Max and Brooke was fascinated by the rain! I guess she hasn't seen much of it!! :) 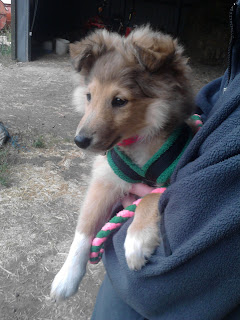