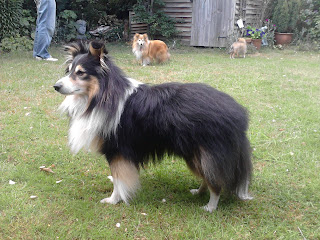 We have had so much fun taking wee Brooke out and about. In the photo above you can just about see her exploring Matthews Mums garden. (Its hard to get pics of her awake as she moves so fast!!) She had her second jab at the vets on saturday and enjoyed being fed large amounts of liver :) Matthew and I took her into St Albans again on saturday but this time without the other two shelties. She was a very good girl being fussed over by numerous people and then she promptly fell asleep when we stopped to have a coffee! 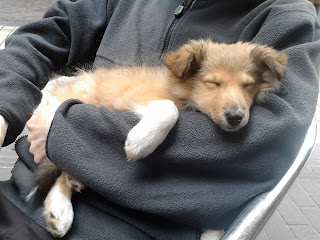 On sunday we went to Herts County show which is a perfect place to socialise a puppy. She is still being carried due to just having her jabs and plus there was a lots of dogs around (plus food on the floor that Brax felt the need to hoover!) My friend Annabel held her while we went off to get food and she fell asleep in Annabel's arms! It was lovely seeing five shelties walking round the show as well - Brodie thought he was in heaven! 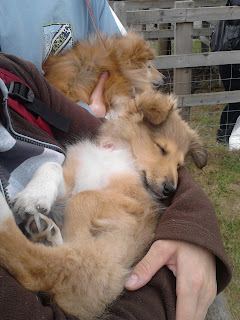 About time I wrote some agility news!! HUGE CONGRATULATIONS to Paul and Maria Bell with their beagle Chester who won into G3 and the qualified for the Starters Challenge Final at only their third KC show ever!! Also massive WELL DONE to Sue Proctor and her fab Working Cocker Dudley who WON G1 agility at Cippenham, their first KC show of the year. I'm very proud of you all!! :D
Posted by Rhoda at 14:34