The doglets have had a crazy agility weekend but loved every minute! We couldn't decide whether to do EASS UKA at Littleport or Ajaxs at Mapledurham so we decided as we live half way between the two that we would do the Masters qualifiers at each. Bracken had already qualified and I was hoping that I could qualify Brodie as that meant all three would then be doing something at the Grand Finals in December and also that I wouldn't just be Matthew's groom, lol!!

Brooke did three runs on Saturday, two nfc's so that Matt could reward her contacts and a jumping. She came 2nd in the jumping, not sure how as she managed to come out of the tunnel on her head - it was a bit wet and slippery and she got mud all over her eyebrows - bless! Her agility run was stunning - her speed over the contacts equated to what she does in training :) Only her nfc runs were filmed over the whole weekend as the video camera died on saturday and we forgot it on sunday!!

Little Brax did lovely clears in both the Masters agility and jumping (the results are combined to get the overall so it's like champ without the final) and finished 3rd overall. Brodie was running like a nutcase iin the jumping and idiot mother managed to get him E'd but he managed everything well. The agility course was great fun - I had an unfortunate refusal as got in his way doing a front cross before the dog walk - I'm just not fast enough on my sore knee so winter training is to focus on blinds and rear crosses! He was such a little dude managing a great running dog walk back to the jump (see course below) and got his weave entry with no help from me as I was miles away-love my boy :) I think he finished 3rd or 4th overall but we as it was late we headed home. Thanks to Amanda Pigg for great fun courses! This is the agility course (click to see it properly) 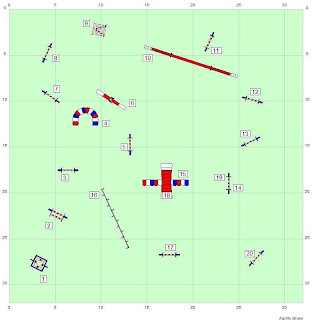 Yesterday we went to Ajaxs and Brooke did two runs and the older two did Masters again. Brooke puppy WON the jumping class!! It was really fast and flowy and little bean was the fastest over all heights by 3 seconds! It was probably the first time that she ran a whole course at the speed she does in training.

Bracken was on form again and talk about consistent! 3rd in jumping, 3rd in agility (5r) and 3rd overall!! She was running so well and her times were really decent considering again the jumping course was quite fast and flowing. Brodie toad managed to win the jumping with 5r as I tried to send him half a mile away into a tunnel  and he wasn't convinced I meant it! Apart from that he did really well, again I struggled to get into position using front crosses so ended up going to plan B and rear crossing loads of it - stupid knee. In the agility all of the midi's got E'd for going in the tunnel under the dog walk so Brodie and I won it overall!! I'm really proud of all three of our shelties, especially little diddle who was retired this time last year. We are going to have fun at the Finals but lots of work to do before then, for me and Brodie its definitely blind crosses, tightening rear crosses and speeding up his seesaw. Brax needs to keep up with her contact work - she actually managed 2o/2o in the ring!! Bless her tiny cotton socks :) 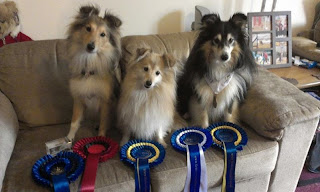 Sparkley bumble had fun playing at the shows and getting cuddles! Her eyes almost popped out of her head when she saw a canoe race at Ajaxs on the Thames. What was even funnier is one of the people passing in a canoe called out to her and it was my wonderful osteopath Gina who was competing in the race!! Sparkle almost jumped in her canoe!! :) 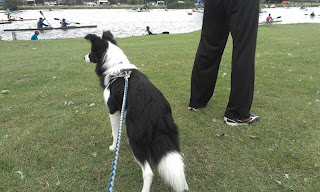 Took a video of Sparkle catching daddy long legs in my field - she is hilarious!! Brooke keeps looking up as though to say 'what on earth is she doiing??!!'