Awwww we have had a fun weekend!!

Firstly thanks to everyone who commented about Sparkles restrains and has put up with listening to me brainstorm about it! She is getting better but I also have some good exercises to work on that don't need a restraint which also means I can train her on my own more effectively! Very exciting :) She was a model pupil at her Multi Skills class and worked really well with new dogs in a new environment. Anna is a lovely fun trainer and gave me hope as her little collie bitch doesn't particularly like restrains either.

Family photo - I love that Brooke is doing her plank work in the background!! 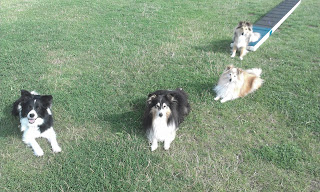 Sparkle in her favourite sleeping place! 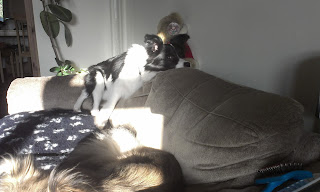 And before going to 'school' with her magic box :) 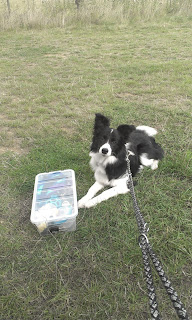 Anyway, onto the shelties weekend! We went to UKA HADS and had a lovely day on Saturday. We arrived too late to walk the Beginners agility so Dolly and Brooke were sadly let down by their handlers, lol! Both girls had a much better run in the jumping as the sat navs were working and had walked the course! Brooke had a pole but was the fastest 5f and Dolly Spanner came 2nd!! Clever girly and that moves her up to Novice Performance at UKA! Some of the runs from Saturday are on my YouTube page.

Brodie did two runs as well and won champ jumping and got a refusal in the steeplechase as I dropped my arm and good boy came in to me. Little Brax did one nfc agility to practice her dog walks which were v good and also did the Circular Knockout Qualifier. (Two dogs racing against each other and if not knocked out you progress to the next round) Well blooming heck it was a fast big course and little diddly (all 11" of her) managed to win it and qualify for the final in December!! I can't tell you how amazing this little dog is - retired last year, then diagnosed and treated for thyroid problems and now not only won lots of the IFCS qualifiers but won and qualified for Knockout and Masters at the UKA Finals at her only attempts. I had to do a photo of Brax with her rosettes as we are so very proud of her xxx 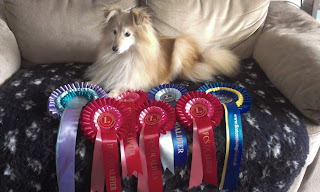 This is round 2 from the knockout - this was her closest one. The crowd really got behind it!! Brax loves the attention - she loved Crufts and the more people cheer the faster she goes!!


Couple of posing pictures from this morning 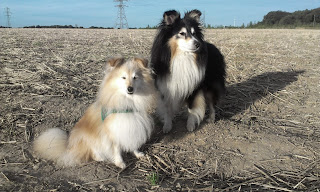 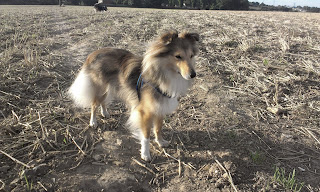