We had no shows planned this weekend so managed to get lots of important things done like catching up on my books and sheltie club stuff. Lian invited us to her lovely farm on Saturday to do some training with the doglets. Brooke and Sonic have both qualified for the Beginners Steeplechase at the UKA Finals in December and Brooke still finds it hard to concentrate when her Grandma Lian and brother are around! She has got much better recently thanks to Lians help but we all thought it would be productive to meet up a few times before the finals to get her used to training with Lian present. Can't thank Lian enough for all her help with Miss Brooke - I have loads of videos of her training but can't get the off the blooming video camera - grrr!! At one point Brooke was working and Lian was playing tug with Sonic in the middle of the course - definitely huge progress!! 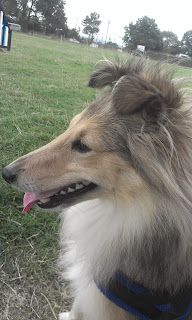 Sparkle and Seren did a wee bit of training as well and were very good! Just some wing wraps, tunnels and go-ons but Sparkle was very focused on her toy and tried really hard. She also did some jumping on the end of Lians aluminium seesaw which was good as everyone I know has plastic or wood ones and the metals ones are much louder. She jumped a bit the first time and was then fine. We also let her run up to the end for a sweetie with it held up which she did no probs :) I do teach the seesaw quite early (not with it tipping but just the running up to a sweet and the banging it down) as I think its important that the dogs learn that planks can move! I see a lot of dogs that learn it last and by then they have got it into their brains that planks don't move and they find the seesaw too much of a shock. We don't let them tip it all for ages but it just gets their confidence high :)

Sparkle being a flirt with Sonic and Saturn! 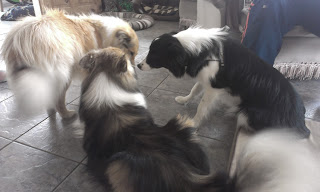 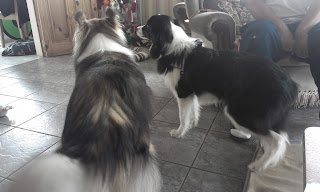 Brooke and Sonic posing - she is very out of coat!! 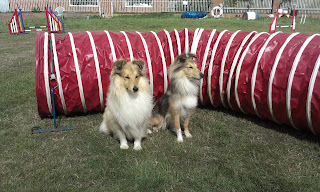 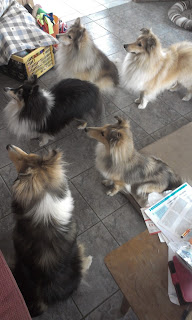 Brodie and Brax were very tired after a morning socialising!! 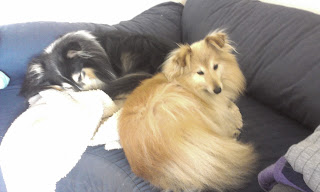 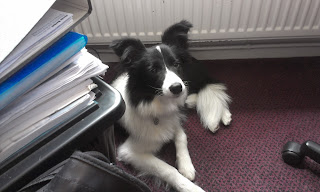