Yesterday we had a lovely time training all three dogs at the field. We had a 'game plan' for each dog as I tend to find without one we are not as constructive!

Brax
As she is now semi-retired, we just keep her doing short exercises over micro height. We particularly worked on rear crosses as these have always been her weakest cross. We re-trained her to a running contact last year and we did a few of these just to remind her of what contacts are - her dog walk is still a bit 'creepy' but we didn't get any jumps so thats progress! The problem with Brax's contacts have been entirely our own doing in that they weren't trained properly in the beginning (we never thought we'd compete so we were taught it wasn't important unless you compete!!) Any trainer will tell you that 'what they learn first they learn best'!!

Brodie
Brodie generally is a very consistent little boy. He too struggles on rear crosses but only going right - left is not a problem! This goes back to last year when he had a back/neck issue and was very stiff on his right hand side. I noticed he was coming out of weaves and not turning right easily and sure enough my physio found he was very sore, poor boy. He is fine now but still prefers left over right! I did some work heavily rewarding right rear crosses and he was doing some nice turns. I also worked on Brodies dog walk as he missed one recently and I need to get it sorted as we have qualified for the UKA Finals which is an agility round. Here is a video of Brodie doing a jumping course recently. I was pleased that I could move away from him in the weaves and layer the jump as he isn't normally very brave!!

Brooke
She is such a crazy sheltie chasing her ball and doing agility that I have got a pair of cheap leg wraps for her. I'm worried about her skidding into the grass or on her contacts and hurting her stopper pads and sure enough after training her wraps were covered in grass stains where she had skidded!! Whether she wears them all the time for agility I'm not sure but it doesn't do her any harm and I think it makes her more aware of her foot placement. We mainly worked on contacts with Brooke, we have managed to wean her off having her manners minder at the end of the dog walk and instead she has a dead toy.

Here is a video of her dog walk in slow motion to her ball.

Her A frame is still a work in progress - Brooke consistently gets the contact but sometimes just jumps the apex and lands on it which is not what we want! We have been using a stride regulator to make her land twice on the descent which is far safer and better for her in the long run.

We have decided to do a 2o/2o on her see-saw and she is enjoying learning her final position. If we ever decided to teach her a stopped contact as well as running her dog walk then it shouldn't be too difficult. No video but here are some pics.

Brooke with her new leg wraps! 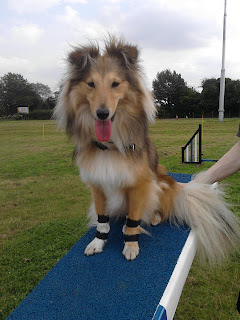 With her pink girly target on the see-saw! She is wearing her new agility collar - thanks so much Lian as its very smart! 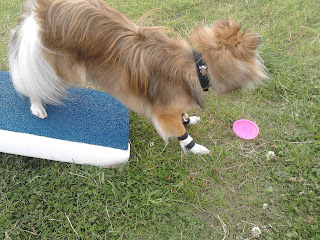 Eating her sweeties on the target :) 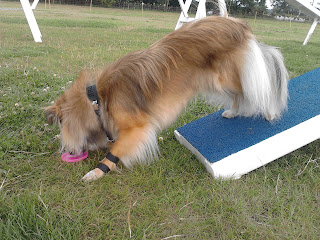 We were trying to put the equipment away and Brooke thought she'd sit in the see-saw and try and get MORE sweeties!! 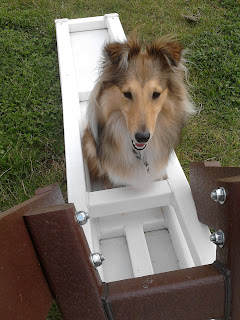