I thought that Max pony deserved his own update as he has been on box rest :(  I am always really careful with his weight as being a native pony they are good at packing in as much grass as possible! This year due to the weather conditions the grass in our field is soooo lush. I was keeping Max in during the day and turning him out at night in a grazing muzzle. At least this way he gets to spend time with his best mate Dice as Dice needs lots of grass unlike Max. I have tried putting him in his own paddock but he doesn't like it and goes through the fence! 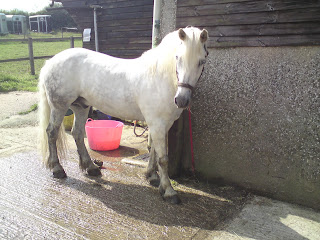 Anyway, he managed to break out of his muzzle last week and when I caught him in the morning he was really pottery on his front feet. I was hoping it was an abscess but the vet confirmed that it was mild laminitis :( He has never had it before and I was gutted that one muzzle-less night was enough to cause him pain. He has been on box rest for a week and is now allowed out for a couple of hours a day. No riding yet but I'm just pleased that the vet is happy with his progress. She has done a blood test for Cushings disease as its common in teenage horses that suddenly develop foot problems. Results for that are back next week. I think Max is enjoying all the extra fuss he is having while he is in - lots of extra grooming and yummy hay!


We were lucky enough to watch the Cross Country event at the Olympics - WOW!! It was truly awesome and so incredible to be so close up to the fences. The course was very twisty and hilly and we managed to walk the whole course before we saw the first British rider jump the first fence. The fences were beautifully made and all had a British theme - this one is called the Royal Herb Garden. 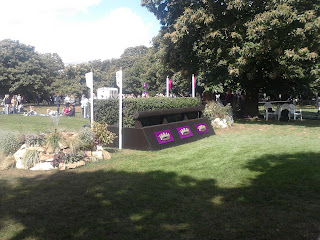 And this fence was the East End fruit barrow - complete with real fruit!! 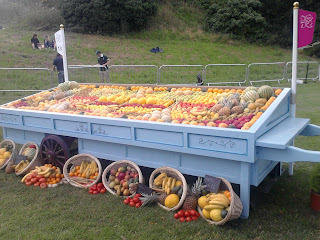 The atmosphere was brilliant and London seems to have come alive with the Olympics - there was happy people everywhere which is very unlike any normal trips into London!! A real once in a lifetime experience and one to treasure. Icing on the cake was that the British team got the silver medal - GO TEAM GB!!!