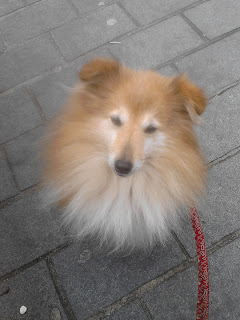 On saturday we went to St Albans market for a wander round with the shelties. It never fails to amaze me how many people will stop to say hello to them. They love the attention and we also used our town visit as a good opportunity to do some focus work with Brooke and Brodie around the pigeons which are everywhere!! 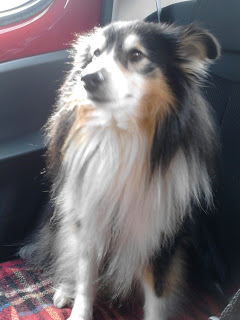 We took the non dog car which mean Brodie has to be on the back seat in his car harness - he really enjoys looking out the window and although this photo is blurry he has his 'smiley ears'  and slightly smug face that he is not in a crate!! Bless my little toad!! 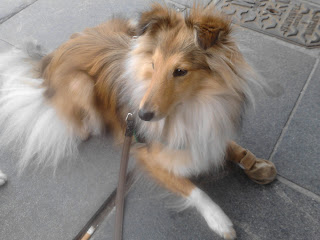 Brooke puppy is still on lead walks with her foot covered due to her cut paw pad :(  She is coping with it really well and being so good about wearing her boot to walk in. Its a boot my clever sister made (she is a saddler) for her dog and she has kindly let me borrow it as it is MUCH easier than a sock and poo bag combo!! 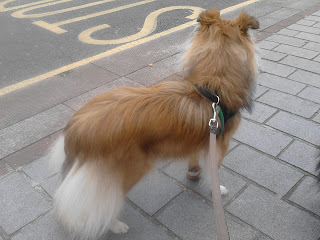 On sunday I did dressage again. Max and I had entered a higher level this time so I was competing against my instructor and other talented people - eek!! I was very proud of Max pony though as he got 60%, mostly 6's (each movement is scored out of 10) and was only 7% off the winner. No placing but thrilled with  they way he went and the fact I remembered my test!! :) 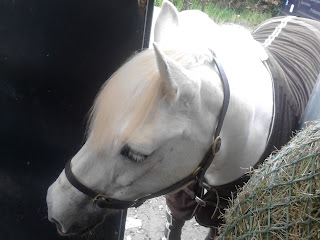 On monday we went to the EABCC show at Littleport. We actually didn't have a first class in the ring and thought we'd have a leisurely start but found out sunday night that they desperately needed someone for the tannoy and ring managers. Matt and I have ring managed several times so thought that was a better option than tannoy! We had a great enthusiastic band of helpers who were all lovely and cheerful despite the foul weather we had after lunch. It makes such a difference having people even giving up half an hour of their day to keep the rings running smoothly. Not wishing to get on my soap box but there are so many agility competitors that don't ever pitch in and help and are rude to the ring party on top of that :(  A simple thank you for the poor leads person (who has trudged back and forward with hundreds of leads in the rain) goes a long way and after all, good manners cost nothing. 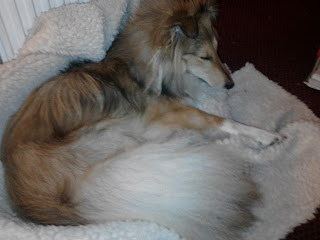 Being ring managers and having bad rain meant that Matthew only did one run with Brax and I managed two with Brodie. I told him to go the wrong way in the steeplechase (bad mummy!) and got E'd and he was clear in the C5-7 jumping (4th but placed to 3rd) I didn't do the agility as it was last in the day and it was so muddy by then. Brax would have been 4th in the steeplechase but they placed to 3rd and tried her hardest but actually measured a couple of jumps :(

We pretty much decided on the way home not to jump her KC small height again. She is so tiny and obviously is much happier at the UKA height so we will stick to that for the rest of the year. Brodie ran lovely over the KC height but again finds UKA midi more comfortable. Its a shame as we won't be seeing much of some of our friends who only do KC shows this year. Assuming Brooke's training goes well we hope to be back at the big KC shows next year. Brax will love doing anysize next year and Brodie might do the odd champ again. The future is filled with a lot of promise! We saw Brooke's older full sister Tig yesterday with her owner Sally and Tig did some lovely runs and got some great placings. They are so alike in a lot of ways and Tig is a real workaholic too! Shame I didn't get photos but the weather was so gloomy.