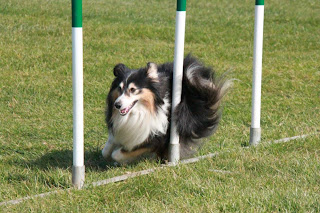 Wow what a gorgeous weekend, the weather was perfect and in fact it would be great if it was like this all year round! As Matthew and I agreed it is good agility weather as not tooo hot, not raining and not too much wind :) Quite impressed that it was so good at Newbury. I have a hang up about competing there after Brodie got blown off the dog walk a couple of years ago at a KC show (pre rubber contacts). Thanks to Lian so much for these pics of Brodie, I LOVE them, especially the look of concentration he has in the weaves! 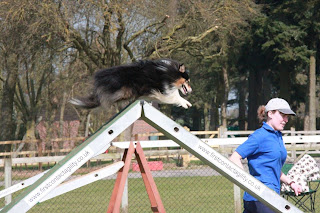 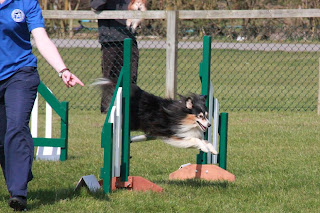 Anyway, it was a lovely show last year and I really wanted to go again, mainly as UKA shows are so perfect for taking baby dogs round the rings and the exercise area is huge and not manic (bordering on dangerous!) like it can be at some shows. Well princess Brooke had a great day out! She absolutely loved being a social butterfly and did some lovely dead toy work and tugging in the exercise area. At lunchtime we took her down to a practice jump and Matthew worked on sending her to a dead toy, wing wraps and rear crosses on wing wraps. She lost attention once when she saw a sheltie but apart from that was focussed so to be honest it was worth going to Newbury for that!! She is such a clever wee girly, love her!! This is Brooke practising a rear cross on a wing wrap.
This is Brooke puppy racing Matthew to a dead toy
We only entered two classes with Brodie and Brax just to get them into the swing of competing again. Brax did Masters agility and jumping and ended up 4th overall which was great! The jump heights at UKA are so much better for our two as they are both so dinky for their height catergory. Brax got 5f on her weaves in the agility but Matt did admit that he should have helped her a bit more! She loved running again and was her normal solar powered little self :) Videos of her runs on our YouTube page or I'll bore you all to death! It was her 7th Birthday so instead I have found a cute puppy picture of her - she was tiny! She is such an amazing little dog, she has taken Matthew from Grade 1 to 7, won a RCC and competed for England. All that though is icing on the cake as she has been the best little companion through some tough times - we love her to bits! 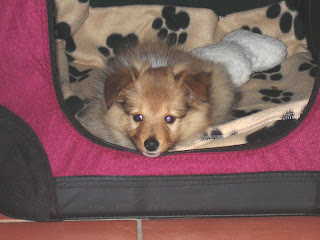 Anyway back to NADS! Brodie had his two runs later in the day and was such a good boy :) Warming him up correctly makes such a big difference to his runs. First was Novice Agility and he ran clear and although he was a little high on his dogwalk (video on youtube) due to lack of homework, he was so much happier in the new spaced weaves so really pleased and he had a blast! He ended up 3rd which I was so pleased with as the dog that won is a grade 7 collie and the course was straight lines! He did his Novice Steeplechase course later on in the day and came 2nd to the same dog which I'm amazed at as he generally needs his running contacts and weaves to make up some time. So thrilled with how he is working and he def finds the jump heights easier afte his back issues during winter. Here is the video of his steeplechase run - I just love running him! :)
Have to say big well done to Amy and Fudge and Marilyn and Tia for winning the Masters and also Kate, Heidi, Caroline and Helen who also did so well with their dogs - great day out all round!
Posted by Rhoda at 18:03