I don't even know where to start!! What an amazing, nerve wracking, emotional and memorable week we had in the Netherlands!! Although its nice to be home and back into a routine, I miss watching phenomenal agility all day, miss runnning my boy and miss my lovely team mates! Bracken and Brodie were totally amazing, they did team training on the Wednesday and then competed Thursday through to Sunday, a total of 9 runs. They were so up for it and crazy!! Two of Lians boys, Sonic and Sizzle were competing as well and she took this lovely picture of the four of them in their Snuggle pets coats :) 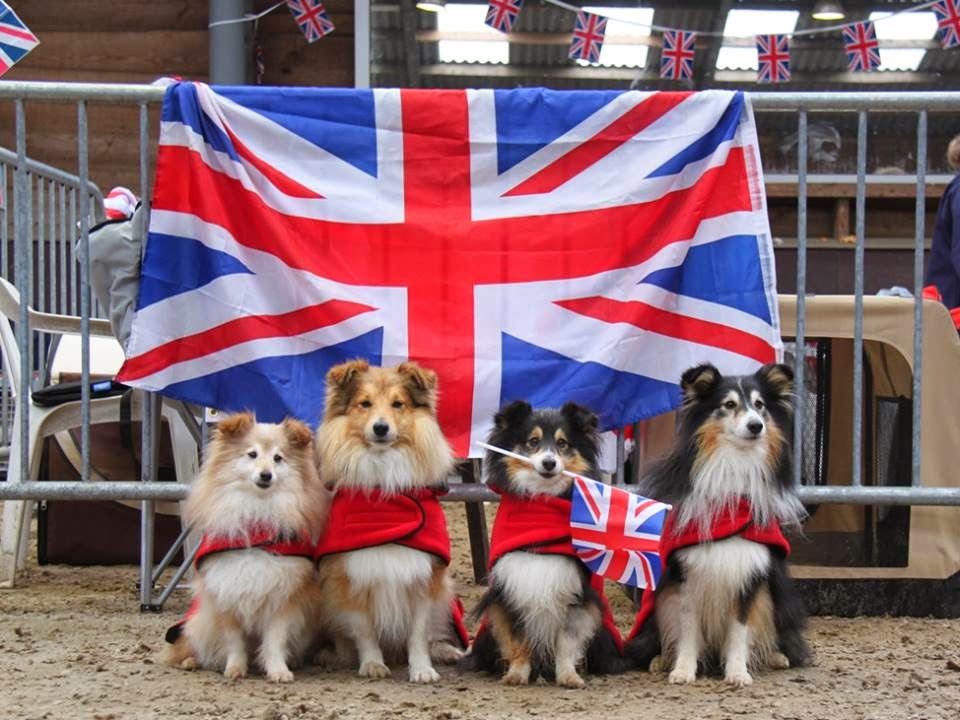 I hadn't met a few of them team before we went out there and I can honestly say that I couldn't have picked a nicer bunch of people! We all got on so well and everyone was so lovely and helpful making sure that we had dogs warmed up in the right place at the right time. We had lots of laughs and meals out together and Matt and I have definitely made some great new friends. As it was my first internatonal team I was worried about being the new kid on the block but the more experienced team members were so supportive and helpful. This is the whole team just after the Opening Ceremony. 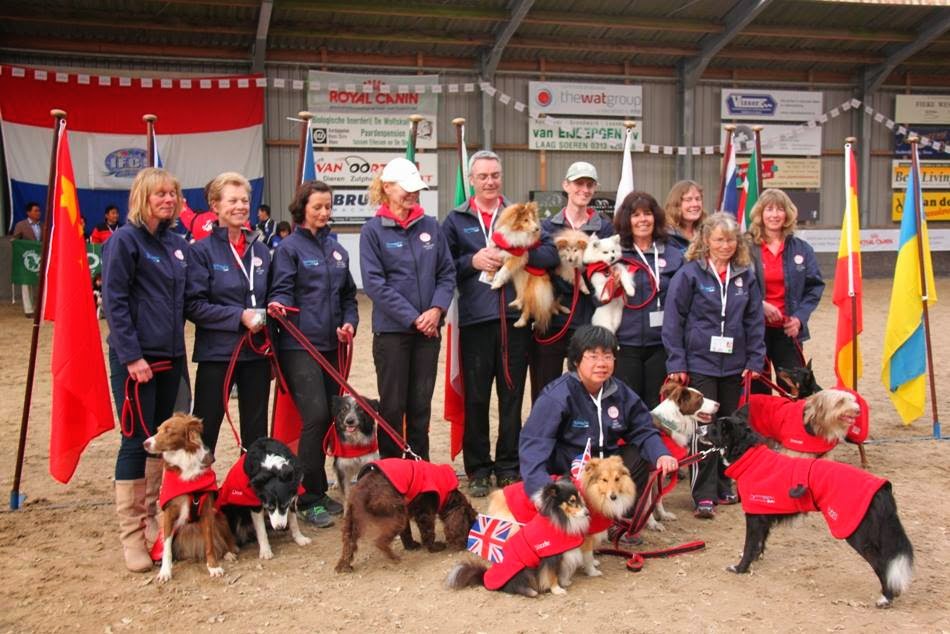 The hotel was brilliant-very dog friendly and there was MILES of tracks and fields for the dogs to run around. Unfortunately it rained almost non stop so we didn't make the most of the walking opportunities! We had Brooke and Sparkle with us as well so we did get out for some nice but soggy walks with them.

We had team practice on Wednesday and the dogs ran really well apart from the tyre which the bigger dogs weren't happy with. Brodie and Brax did it well thanks to Lian letting us practice at hers. Each country had half an hour to practice on the equipment. The contacts are quite different as well, the dog walk is lower, the A frame is a bit higher and so is the seesaw. This is a picture of the Dutch team practicing. 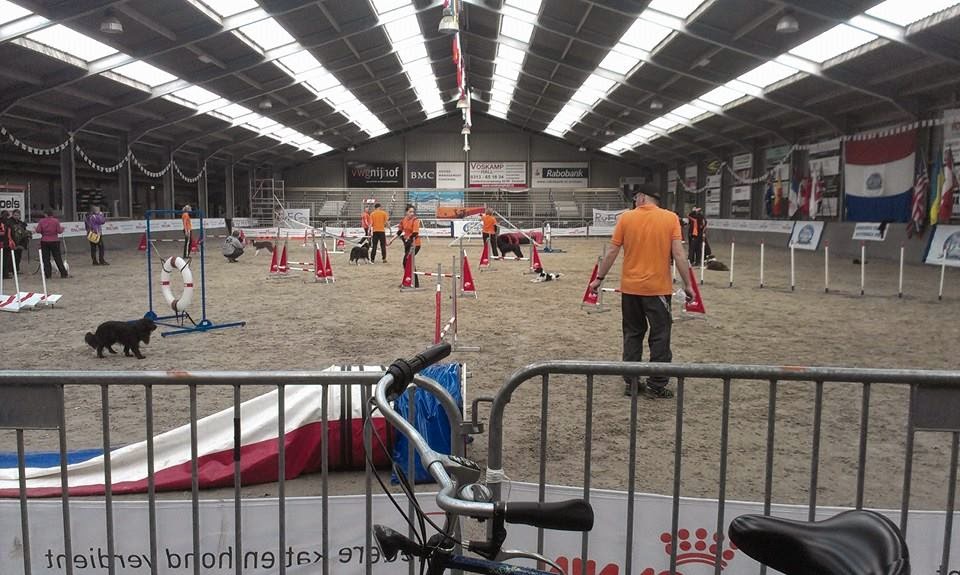 Each morning we got course plans so we had a vague idea where we were going before having 8 minutes to walk it (which goes very quickly!) Here is the course plan for the team agility 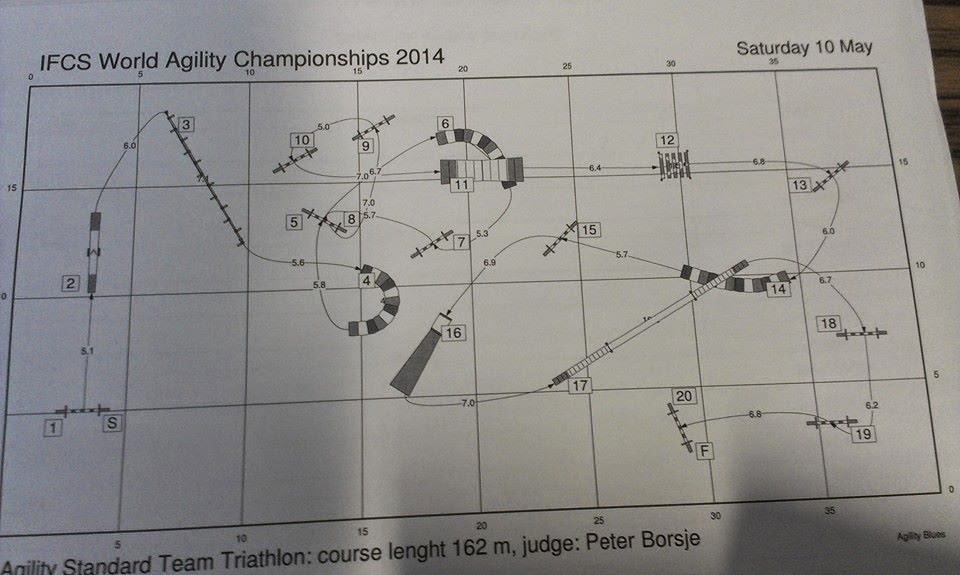 I admit I was really nervous before our first run but settled once I'd got one under my belt and managed a clear despite having very wide turns and Brodie getting stuck in the cloth tunnel which was made of heavy plastic tarpaulin, poor boy! Out of 9 runs he got E'd twice, once as he wouldn't go through the tyre as the first obstacle (neither would a few other GB dogs, think the timer wings put them off) and once as he kept coming out of the weaves but he came out sore after that run on the last day so think he had tweaked something. He managed to finish 11th and 13th individually and his team finished 10th due to a team mate getting an E but we had a cracking run in the team relay and loved every minute! He isn't the fastest but he is consistent and I treasured every run with him, how amazing are him and Bracken to have taken Matthew and me from Grade 1 all the way to the World Champs?!! Couldn't ask for better first dogs, we owe them so much xx 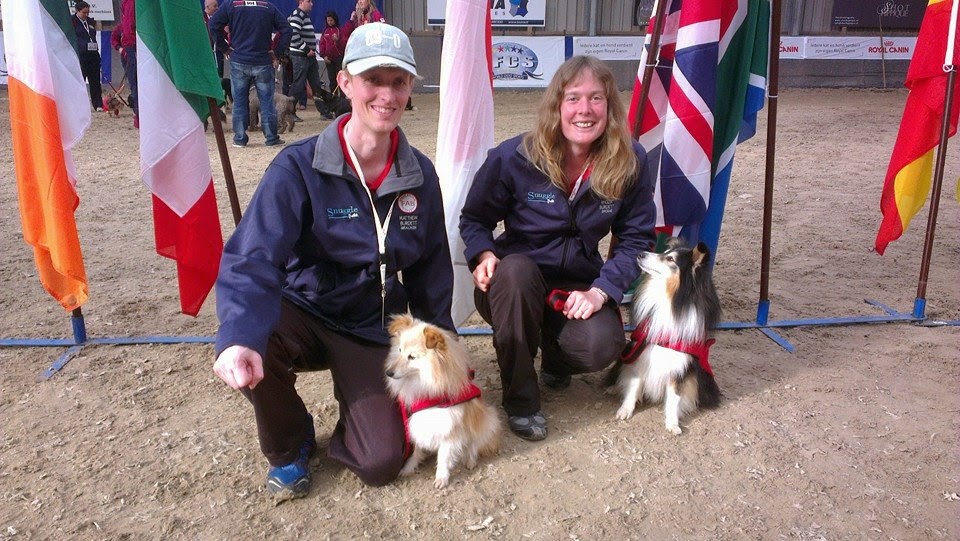 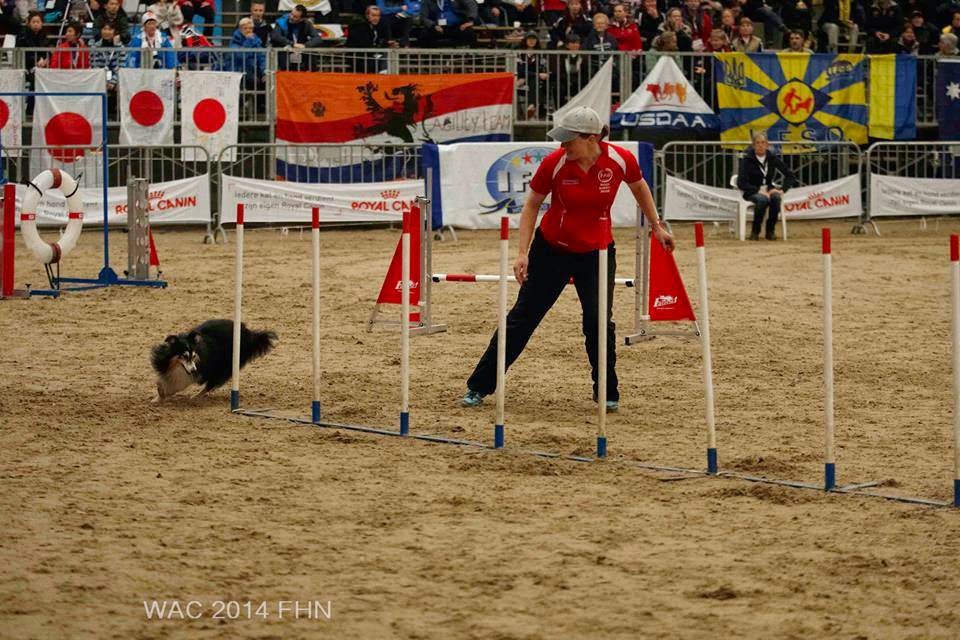 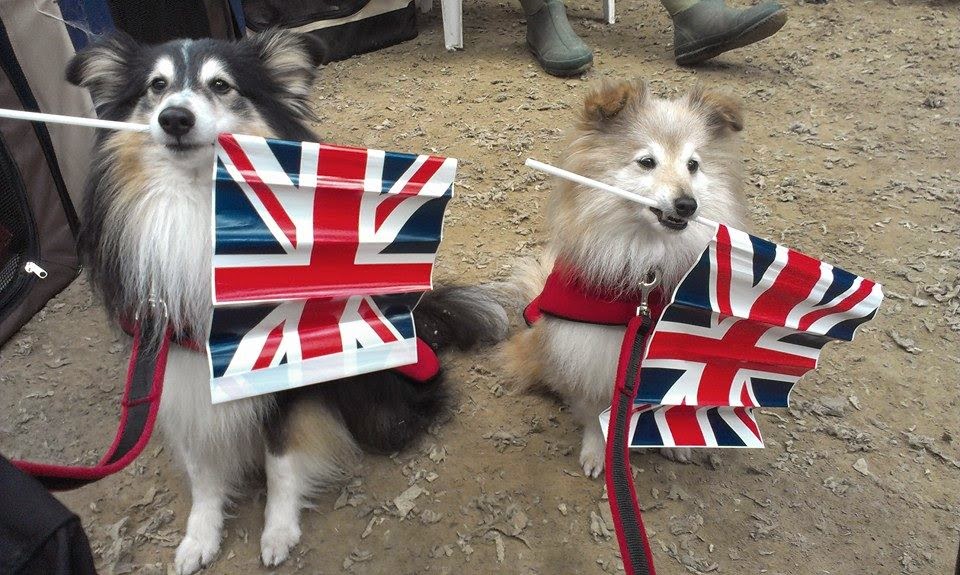 Little Bracken was on fire!!! Her and Matthew finished 4th and 5th in a couple of the individual runs which was amazing :) He did give us some heart stopping moments though as usual!! Brax was so keen and fiesty and excelled in her agility runs by actually getting her 2o/2o on the dog walk in every run!! We even have photographic evidence... 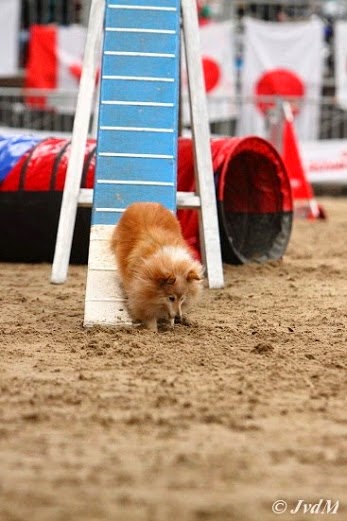 And here she is demonstrating her awesome seesaw :) 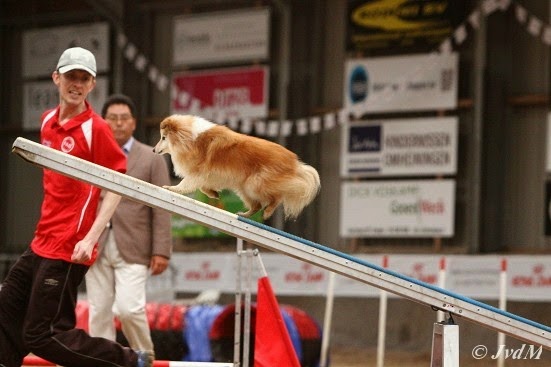 Bracken was the small dog on her team-she also had Pat Brown and Diva and Angela Williams and Tif (both awesome collies) They had an amazing three rounds in the team competition and WON GOLD!!! The other GB team won Bronze and was made up of Lian with Sizzle, Abigail and Oggy and Tracy and Tink. I was soooo emotional watching all of them run, the fact it happened on my birthday and I got to watch Matthew and the team stand on the podium singing the National Anthem made it so special. I had a sore throat from screaming so much!! 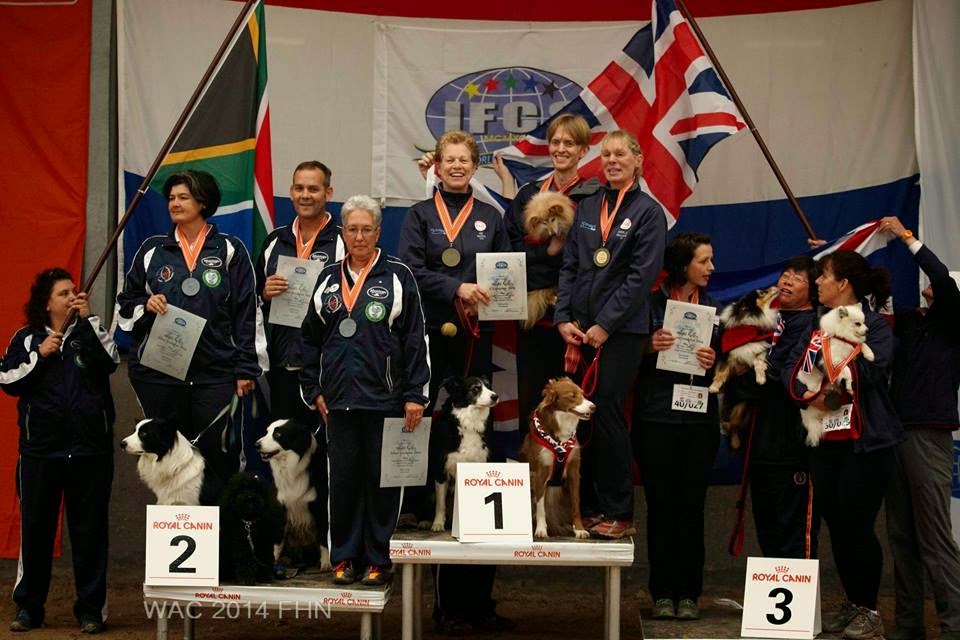 Team Gb did amazingly in the individual medals too with Abby and Oggy getting Gold in the Indv Agility, Dawn and Breezer getting Bronze in Gamblers and Tracy and Tizzy getting Bronze in the All Around!! Wow we had some nice meals out to celebrate!! 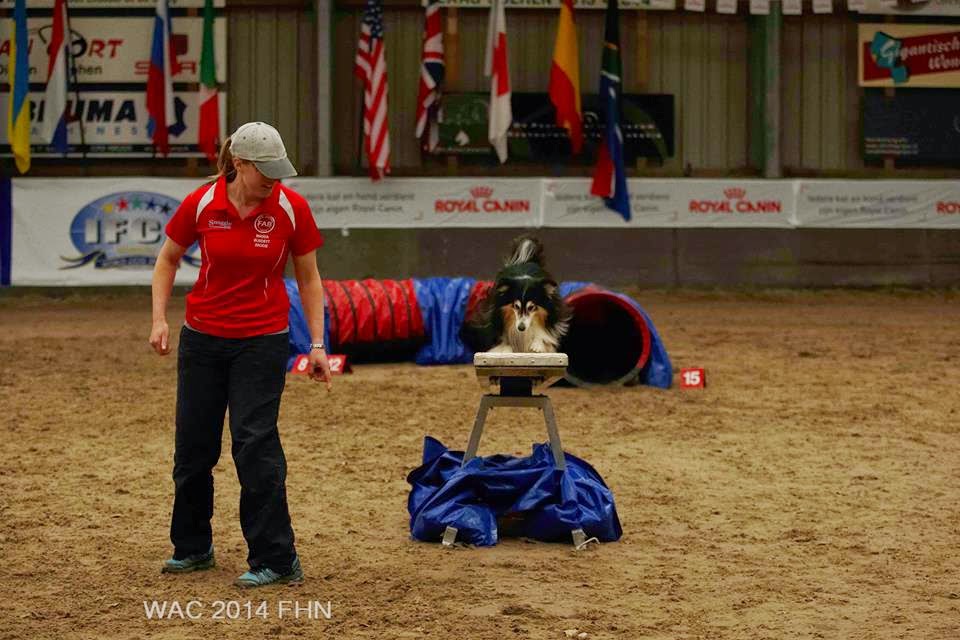 The pesky tyre-Brodie demonstrating that its not that scary after all! 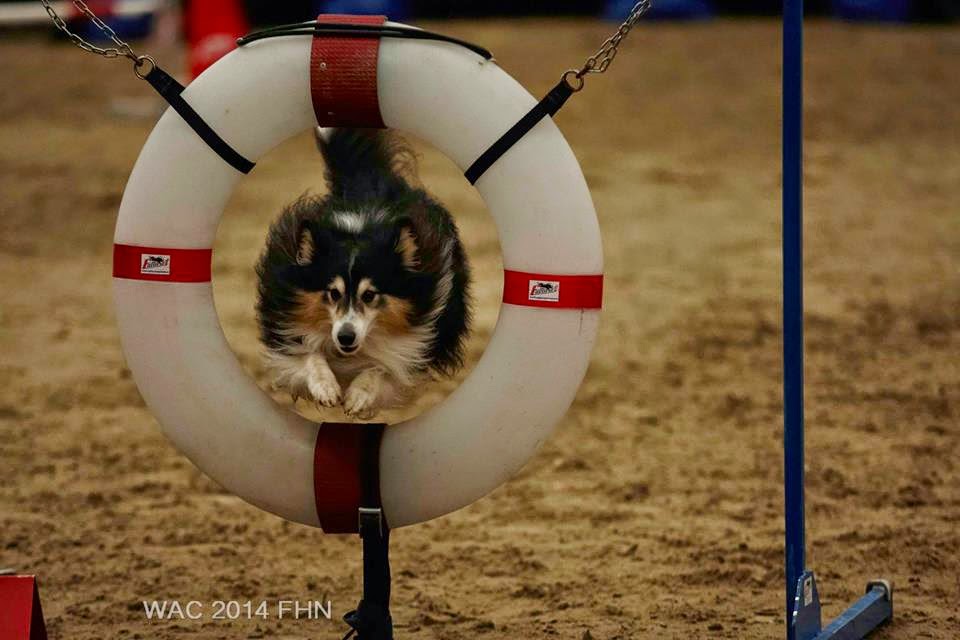 I can honestly say that it was the experience of a lifetime. I'm not sure that I will ever get the chance to repeat it again, I would love to but either way I will treasure the memories for a long time to come. To see my best mate/hubby getting a medal with our naughty little Bracken was the icing on the cake but all of it was incredible and quite surreal! Brodie worked his little sheltie socks off for me and he truly is my dog in a million-no medal but he is my champion!!

So Brooke and Sparkle.... big socks to fill! Sparkle was trying to sneak into the GB camp by wearing Brodie's harness! She is not a happy puppy at the moment as she has just come into season poor girly! 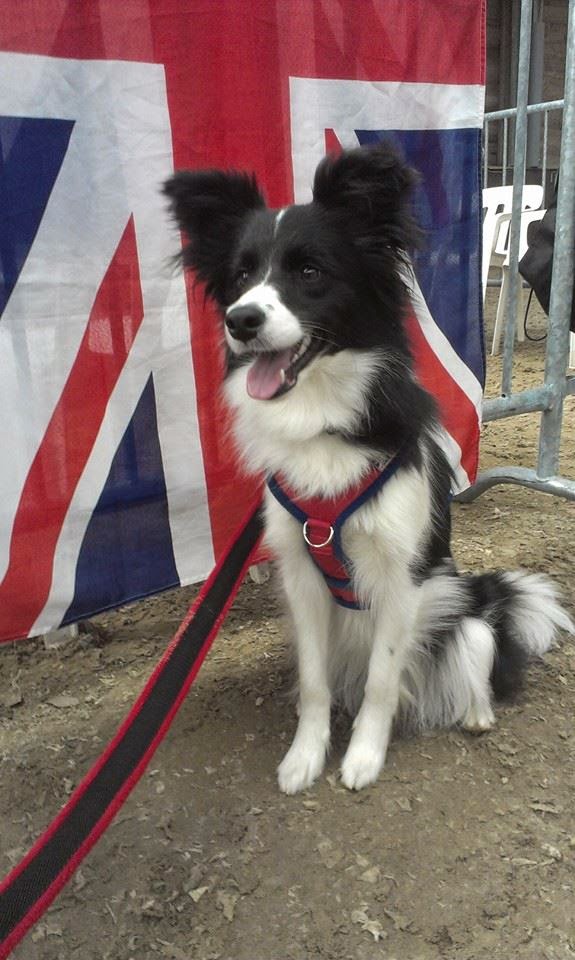