Dealing with a teenager..!

Sparkle has suddenly become a teenager! Its like someone flicked a switch on over the weekend and she has been CRAZY!! My mild manner ickle pup has been pulling on the lead like a tank, swimming in her water bowl-grrr and getting overexcited walking round rings and barking/screaming at dogs running. I know its a phase that will pass but we need to iron out the niggles now before they become habits. Two of the shelties didn't really do the teenage thing in a big way - Brodie and Brooke's naughtiest moments were running off after a flock of birds and not coming back!! Nothing was chewed, they didn't pull or make much noise. Matthew had to remind me that Brax was a pain in the a*se which I must have forgot looking back with my rose tinted specs on! I had forgotten that she pulled to the point we used a headcollar as she was choking herself (even on a harness) trying to chase anything that moved. She was such a dreadful car/bike/jogger chaser and would work herself into a frenzy. You wouldn't believe it now - she is so fab at everything bless her. 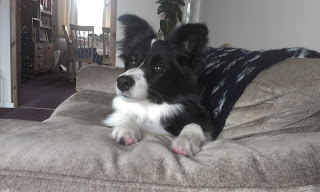 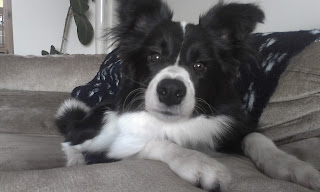 Spark has been really good about coming back and up until this weekend hasn't pulled on her lead or been excited walking round rings - we are just going to have to do some focus work as I don't want her getting into the habit of screaming at dogs running. She wasn't bad all of the time but def some homework needed! I have been getting her used to wearing a headcollar in the house just in case we need to use one. She isn't big at all (all 7kg of her, lol!) but it would be useful to be able to turn her head away from the action. I have found a young dog multi skills class that would be good to take her to as well so she gets to work around other dogs.

Having said that she is being a bit of a teenage, I couldn't fault her on her first public demo - I only took her which in hindsight was a bit silly as I had no back up if she had been overwhelmed. She rose to the occasion beautifully and LOVED the cuddles at the beginning and end! She worked through all her tricks and nothing phased her at all - even though some of the patients are wearing oxygen masks and had machines beeping.

Here she is after her demo - hoping I'll drop some cake! :) 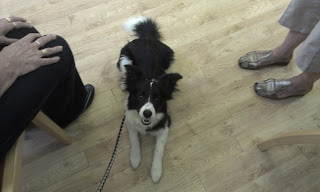 We went to Teejay UKA show yesterday. Poor Matthew has been feeling a bit rough so only managed a couple of NFC runs with Brax (dogwalks) and ran her in pairs with me and Brodie. He didn't run Brooke as he needs 100% brain and leg power for her!! Brodie was a good boy, winning his steeplechase but then fell off the dog walk in pairs. I carried on running him as he landed pretty much upright for a change but pulled him from the next class. He seems fine today but I'm doing heat packs and lead walks for a couple of days to make sure. Dolly was the star of the show!! Her first run was the Beginners Steeplechase qualifier and she was soooo fast that I mistimed a front cross and she cut behind me and shot past a jump so we got a refusal. I carried on running her and she finished 4th with the fastest 5 faults (despite the refusal she was 3 seconds faster than the winner) so I'm kicking myself a bit! Her next run was jumping and she came 3rd - clever choccy wocker :) I'm really pleased as there were 12 weaves and she just got her head down and got on with them without looking at me at all. Her confidence is definitely on the up! Her last run was another steeplechase and poor Matt was wilting by then so I don't know whether she was 1st or 2nd but she did another smashing clear!

Here are another couple of my fav photos from the week - the first is two of Sarah and Simons hounds - Tom and Ali after their playtime in the field. They just love running around and it makes me laugh watching them bound around having fun after the difficult lives they have had. They have the best home now, lucky boys!! The second pic is the two ginger girlies having a snuggle while Matthew was away-they definitely felt sorry for themselves! 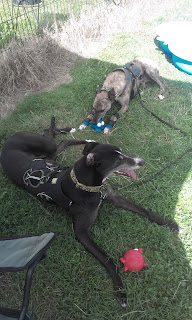 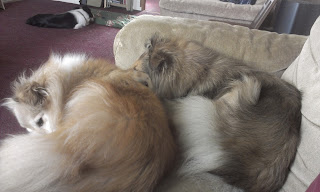