We ran a fun show on Sunday at my field. It was for members only and really to give the people who had never competed the chance to win a rosette or two and to see what happens at an actual show. It was soooo hot but we were really lucky as a couple of people kindly brought gazebos with them and Dolly's Mum had donated a paddling pool to keep the dogs cool. Jamiesons had their clothing stand and there was a BBQ at lunch for everyone, ooh and beer :) Sarah's husabnd Patrick had made us some timers (proper infra-red ones - amazingly clever!!) so we could be really accurate with the results and Matthew got bulldozed into judging, lol!! 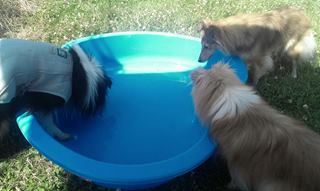 I was really pleased with how it all went and all the dogs and handlers really enjoyed it despite the heat! I was very proud of some of my baby dogs who have never been in an agility show environment before and they coped really well with it. We gave people the opportunity to run NFC if they wished so they could reward their dogs. One of the little rising stars was Willow beagle puppy (15months) who did her first competitive run in a steeplechase and WON! Clever girly-she will be one to watch! My job just makes me smile :):):)

We didn't compete at the weekend as we were busy organising for the show but all four doglets went to a training session with Dan on Monday. They all worked their socks off! Brodie and Brax went first and did some of the more complicated stuff. They were brilliant and Brodie tested me with his preference for tunnels over contacts! Did some great weave entries too. Then it was Brookes turn and she did some fab stuff - here is a little video of her.

Sparkle had a go as well - we were working on wing wraps and going on. She has done the two separately but not put them together yet. She gets it in this clip but is a little hesitant on the go on. The best thing is that she tugged like a nutter with Dan as well as us! I have that in another clip but need to edit it as Matt filmed the ground for some of it! If you watch carefully you can see Sparks harness break at the end - good thing it did it in a field and not on a road...

This is one of her just doing a wing wrap, her turns are coming on nicely. She is only 5 and a half months so she isn't doing much - just a couple of ten min sessions a week if that :)

Finally uploaded vids from GT UKA. This is Dolly getting a few faults on a beginners jumping run but I was really pleased as hardly anyone went clear. The angles were quite hard for baby dogs and she kept her speed up nicely. We are definitely starting to work as a team more in the ring. Sorry about the shaky video and the noise - Matthew was filming and holding a rather excited Brooke!!