Diva pony is now officially a yearling! She has grown into a very pretty young lady and has finally lost all of her winter coat and is looking very sleek! This is Diva with her big brother Rio. 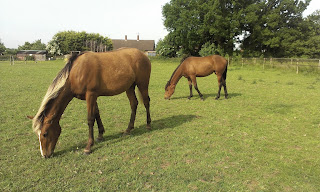 At the moment she is about 13hh so still has a fair amount of growing to do - the guestimation is that she will be about 15hh which is a nice size :) 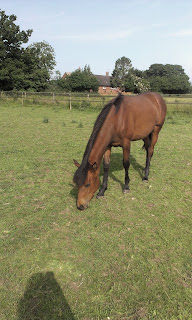 Max can't be left out so here are a couple of pics of my handsome boy :) 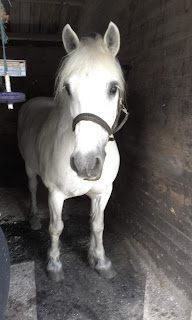 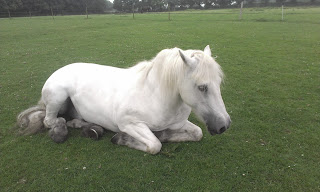 Onto agility! We went to the FAB Gloucester show at the weekend for the third IFCS qualifier. Unfortunately this time they decided to split the four classes over two days which seems a bit unfair on the day trippers like us so Brodie and Brax only did two runs each, jumping and gamblers. Brooke puppy did Agility, Jumping and Steeplechase. Brodie and Brax both did a fairly scrappy clear in the jumping (sorry haven't done video uploading yet!) but managed a place each. Brax won her class and Brodie was 3rd (only 0.3 seconds behind Brooke's brother Sonic - go the shelties!!) Matthew and I both failed miserably in the gamblers, the judges got in my way and I have to make half my course up as I ran which put me in the wrong place at the wrong time and both of ours failed the gamble so we need to practice sending them into tunnels!! Unfortunately since Axstane champ I have been doing loads of work pulling Brodie off tunnels so he didn't quite believe me when I wanted him to go miles away into one, lol!!

Brooke did a lovely run in the agility over a really tricky course (go round after weaves, straight tunnel under A frame, funny jump angles for a baby dog) and got eliminated on the second last jump. The judge clapped her elimination though as she was the only dog to get round that far! Her jumping run was a nice course but she came out of her weaves as Matthew was pushing it a bit on purpose but she did it beautifully second time. In the steeplechase she ran past a jump but I think it was because her bad Daddy gave her the wrong verbal command! Seeing as I haven't got round to putting the videos on YouTube yet, here is her Jumping run from Axstane last week