We have been trying to build up the dogs fitness gradually after so much time off training over the winter. Lots of long walks and some proprioception work has helped a lot. The show season has started but we are only doing a couple of runs per show with each dog. Brax did her first show of the year yesterday at Newbury. She was a really good girly getting a 2nd in the agility and the sun was out which helps her a lot :) 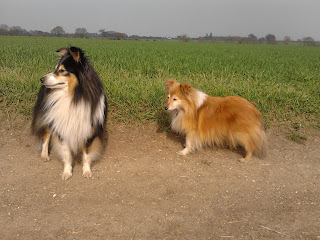 Brodie had one jumping run before the pairs but same as last weekend first run of the day resulted in an elimination!! I think he is so excited to be doing agility and I haven't quite got my brain working fast enough yet!
Matthew and I did the Split pairs which means both dogs run over toy height. One dogs does agility (Brodie cos of running contacts) and one does a jumping course (Brax). Our two went like rockets having never done pairs together before and finished 3rd overall. Not bad considering that the two pairs that beat us were blooming fast standard dogs!! Clever shelties, very proud of them both.
Posted by Rhoda at 16:02