Doglets were ace a Hawbridge! Brax did a run in champ jumping and won it, was a very long spread out course but she still made Matt race around :-) Sparkly did the Dog Central Beginners qualifier and won the agility run but got 10f for a refusal and pole in the jumping so no qualifying this year but hopefully we can get it together next year! 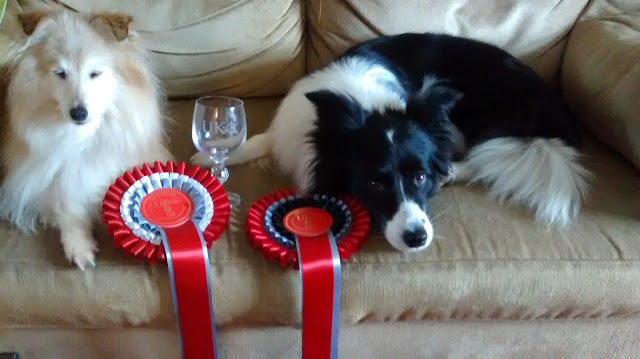 The older two were in the Masters on Monday. Brax went clear in the jumping but ran into side of the tunnel in the agility as it was an awkward tunnel entrance (she has done that many times in her career!) so Matt ended up taking her out. Brodie had the back pole of the spread in the jumping but was clear in the agility and I think finished 3rd overall but we left before the results came out. Here is Toads jumping run...

Talking of E's Spark, Toad and I got E'd in all of our runs at Letchworth! They both did some really nice work though and Sparkly did a couple of awesome dog walks and waits in the practice ring. I have been having a problem with her stressing on the start line since a dog kicked off behind her. Being able to go in the practice ring and do some waits was so good :-) Little Brax ran in anysize and flew round...they only gave out clear round rosettes but she would have been 11th out of 124 dogs of all heights!!
Posted by Rhoda at 17:28