Agility but not as we know it...

I did agility all day on Saturday. Not that unusual I know, except it was HORSE agility!! Poor Max was my long suffering guinea pig for the day and I learnt such a lot about working with him and our relationship. The day started out with some leading exercises. I guess you could liken it to recall and wait! Max has always had very little regard for my personal space but Martha who ran the clinic had him standing patiently like a lamb within five minutes. VERY hard for a mega hungry Highland pony! 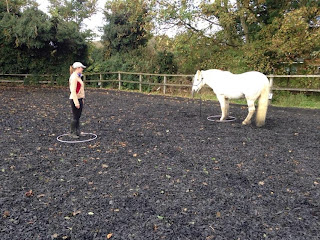 We did lots of in-hand work in the morning, introducing them to the obstacles (standing in hoops, walking through a flappy curtain, backing up between poles, walking over tarpaulin, 'weaves' through cones) and ridden work in the afternoon. Max was a dude but was brain fried after the first five minutes. I think he slept like a log through the fireworks that night! The other lovely thing was that all the in-hand exercises I could do with Miss Diva as well :) 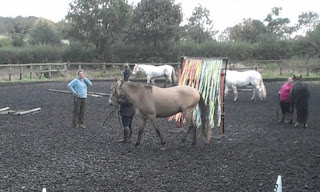 Ok on to the doglets, sorry for the non-horsey people for that brief interlude! All our dogs have time off doing agility for a month in winter. Sparkle hasn't done any agility work for a while and won't until the middle of November. I am still working on her balance and strengthening work and building up her walking gradually. She is now doing longer walks with some of my walking dogs. Here she is being a good puppy :) Even with dogs that don't like other dogs she just walks along not fussing at them which I'm really pleased about. 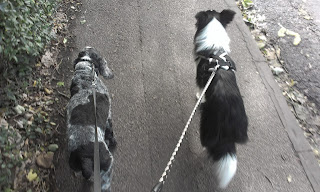 The older dogs are still doing bits of agility work as they are all qualified for the UKA Finals at the end of November. They will probably have their agility holidays after that. The weather usually has a say in how much training is possible as well! Hoping that Brooke will be on maternity leave at the start of the year as well :)

We are trying to retrain Brax's dog walk to running as a winter project as her A frame is looking pretty ok now. We started to train her to run in 2011 but once she started to get poorly we retired her. We didn't think to try training running again when we got her working again at the start of this year. She has an awesome 2o/2o in training and can do it in the ring but it is very slow. The problem is that once Matt quick releases her once the wee bugger just pings it on the next occasion! So in Chippenham Champ her dw in the agility was creepy and slow but then she self released in the final and only just got it. We figured at the age of almost 9 that she needs to run to keep up the speed and she stands a chance of missing it either way anyway! Poor girly being our first agility dog started with 4 on contacts and no shaping work whatsoever so no wonder she makes up her own rules occasionally!!

We started plank running with her last Tuesday just using her command 'run' to see what behaviour she gave us - she remembered! Jenni very kindly filmed it and also did slo-mo which is so helpful when you are watching something that resembles a flying hamster! Her hits weren't bad and got better as she went on. She still does funny little 'leaps' quite a lot so if anyone has any ideas please let me know. Her hind foot separation isn't brilliant but is coming and she is a short dog so doesn't have a huge length of stride. She is running to a food target at the moment :)